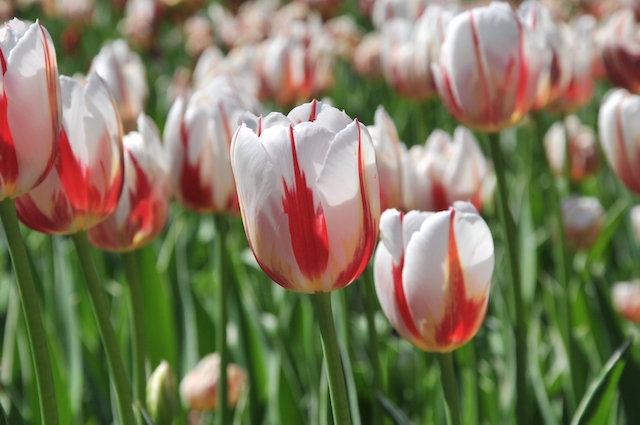 Sept. 12, St. Jacobs, Ont. – The much anticipated Canada 150 tulips have left Home Hardware’s Distribution Centre in St. Jacobs, Ontario and are making their way into Home Stores across Canada.

Officers with the Waterloo Regional Police Service were on hand to help kick off the tulip’s trek. This limited edition bulb, created as the official tulip of Canada’s 150th anniversary, is available exclusively at Home Hardware in limited quantities.

Home Hardware Stores Limited has partnered with the National Capital Commission (NCC), the official gardener of Canada’s Capital Region, the Kingdom of the Netherlands and Communities in Bloom for the selection and distribution of the Canada 150 tulip.

Developed in the Netherlands to celebrate Canada’s milestone in 2017, the tulip is white with red flames and bears a striking resemblance to the Canadian Flag.

“As a 100 per cent Canadian owned and operated company, we are proud to bring such a unique offering to our customers to celebrate an important milestone in Canada’s history,” said CEO Terry Davis. “We look forward to seeing the tulip blooming in communities across Canada in 2017.”

• During Canada’s 150th anniversary celebrations, 300,000 Canada 150 tulips will be showcased in the NCC’s flowerbeds in the Capital Region and thousands more will bloom in community gardens across Canada.

• The tulip represents a long-standing friendship between Canada and the Netherlands.

• Tulips were first planted in Canada’s Capital in 1945 when the Netherlands sent 100,000 tulips as a postwar gift of gratitude to thank Canadian soldiers for the role they played in the liberation of the Netherlands.