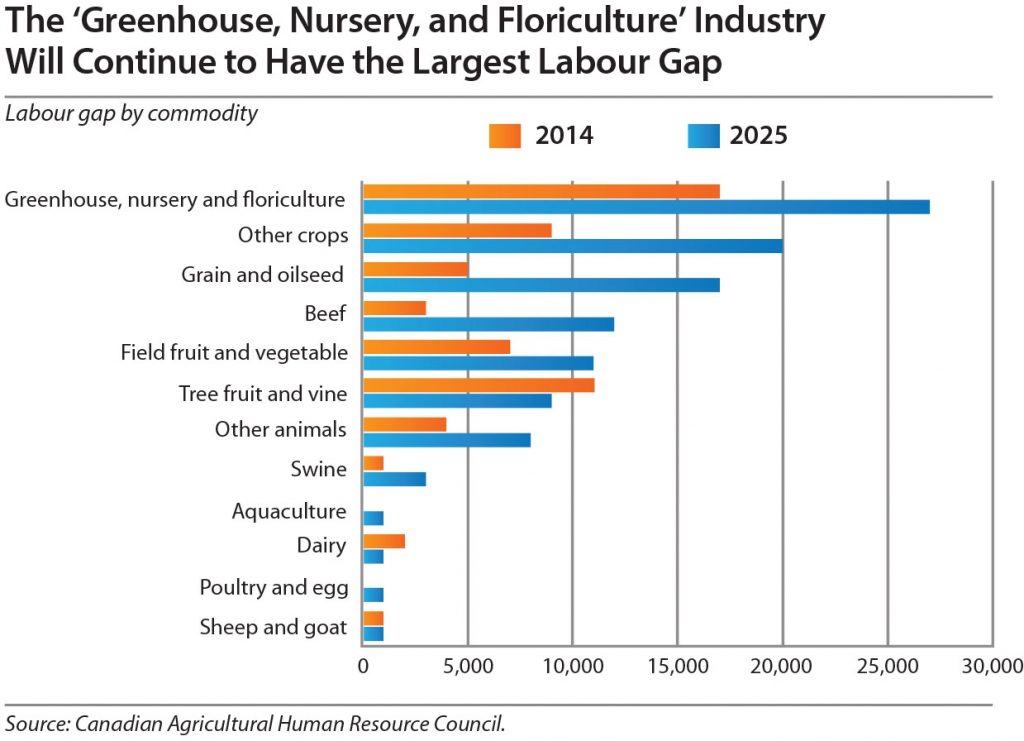 March April 2017 – The gap between labour demand and the domestic workforce in agriculture has doubled from 30,000 to 59,000 in the past 10 years and projections indicate that by 2025, the Canadian agri-workforce could be short workers for 114,000 jobs.

This is a key finding of newly released Agriculture 2025: How the Sector’s Labour Challenges Will Shape its Future research by the Canadian Agricultural Human Resource Council (CAHRC).

“Among commodities, the ‘greenhouse, nursery, and floriculture’ industry will continue to have the largest labour gap,” notes the report. “With an expected gap of 27,000 workers in 2025, this commodity group will account for nearly one-quarter of the sector’s labour gap.”

The research also revealed that primary agriculture has the highest industry job vacancy rate at seven per cent.

“The sustainability and future growth of Canada’s agriculture and agri-food industry is at risk,” says Portia MacDonald-Dewhirst, CAHRC’s executive director. “It is critically important that this risk is acknowledged and mitigated in an intentional and strategic way.”

The industry has been encouraging young people and workers from other sectors to get into agriculture as a career. Despite extensive efforts gaps still exist and there still will be a large void in the future.

Labour shortages create risks to farmers who can only hope they will have the same or greater access to both domestic and foreign workers in the future as they do now.

The study examined only primary production. Agri-food industries such as food and beverage processors or input suppliers, which have additional labour demands, were not considered in the study.

The research indicates that the worker shortage is critical today and will be even more so 10 years from now, with potentially serious consequences for business viability, industry sustainability and future growth.

Access to less labour for Canadian farmers now and into the future will affect food security for Canadian consumers and will also affect export potential of Canada’s entire agri-food industry.

To address the labour issues identified in the research, CAHRC, with the help of the federal government, has developed agriculture-specific human resource (HR) tools designed to support modern farm operations to manage their workforce.

CAHRC offers Agri Skills, online and in-person training programs, and the Agri HR Toolkit – an online resource guide and templates to address the HR needs of any business. For agricultural organizations there are customized labour issues briefings that apply the new research to specific commodities and provinces, to explore the labour implications within their specific area. For more information on these and other CAHRC offerings visit www.cahrc-ccrha.ca.

The Agriculture 2025: How the Sector’s Labour Challenges Will Shape its Future report can be downloaded at http://www.cahrc-ccrha.ca/agriLMI.ca. It was validated through industry consultations conducted Canada-wide including: 1034 surveys of employers, workers and industry stakeholders; 80 phone interviews; six focus groups for a total of more than 100 participants; and seven webinars focused on specific commodity groups with 100 participants in total.

The Canadian Agricultural Human Resource Council works with industry leaders, governments and educational stakeholders to research, develop and communicate solutions to the challenges in employment and skills development in primary agriculture.
Print this page