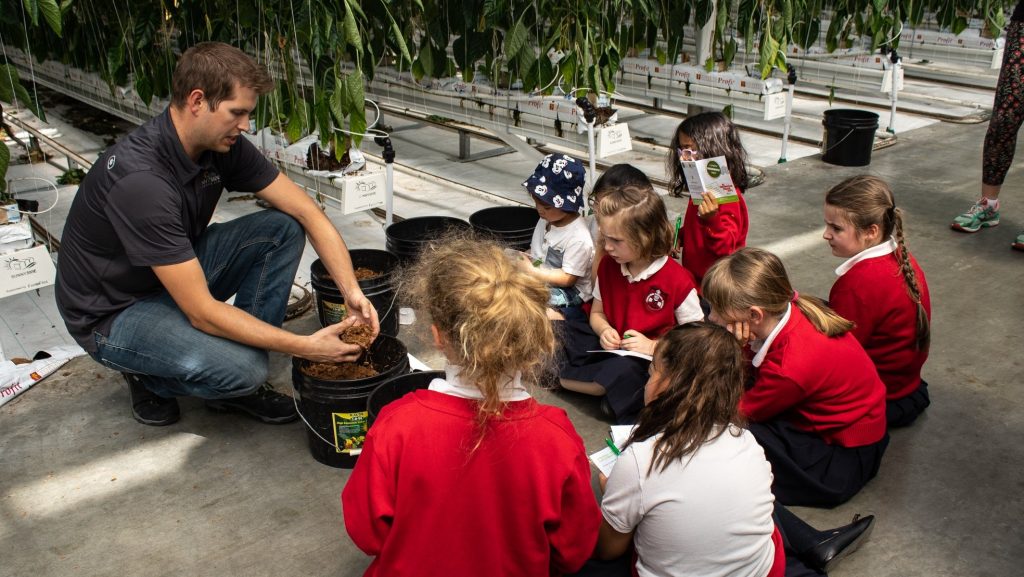 What better way to create awareness of our sector than by inviting school children into the greenhouse?

Three of our greenhouse operators agreed to host up to two days of farm tours for students on May 1 and 3, and then one day for farm tours for the public on May 5. The host greenhouses were all decorated for the public farm tours so it made sense to host the children during the same week. We brought the people from BC Agriculture in the Classroom (BCAITC) into the greenhouse for a tour; they went back to the office and created linkages to the school curriculum for everything they had seen while touring the greenhouse. From those linkages, BCAITC created passports for primary and intermediate students, complete with questions and places to put stickers, and spaces to answer the questions and to draw what they had seen.

The school tours were a great success! We hosted about 900 students plus teachers and parents, taking them through the boiler and irrigation rooms, the grading and packing warehouse and then into the production area. In the boiler room they learned about heat and CO2 production, in the warehouse they watched the peppers going over the grading line and being packaged into the boxes they had watched being made. They saw a display of peppers packaged for each of the farm’s customers, including private label packs to various grocery store chains. They were excited to see packaging they recognized from the grocery stores their families shopped in. In the production area they learned how the plants grow and are trained, how they are irrigated and how the workers are able to maintain the crops from carts on heating pipes. They also enjoyed the biocontrol display, learning which good bugs go after which bad bugs, and looking at them through a magnifying lens. The children were eager to learn, mesmerized by the size and scope of the greenhouses and asked many questions. After tasting samples of our vegetables, we sent them home with stickers, a USB bracelet, their passport and pen, a pepper and an invitation to come back on Saturday May 5 and bring their family.

Saturday May 5 also saw the three host greenhouses with farm tours open to the public. Another successful day! We had more than 800 visitors; they were also able to tour the boiler and irrigation rooms, the grading and packing warehouse and the production area. For the public farm tours we also had teaching chefs and student helpers from BC schools who made signature dishes and provided samples and recipes. Guests left with a greater understanding of what goes on inside greenhouses. They learned that greenhouse veggies are local, they enjoyed the taste of our veggies during the tour and they took some home to try. There were door prizes, Facebook and Twitter draws and lots of information to take home along with recipe cards.

Interested in being part of BC Veggie Days or hosting your own public tour? Contact the BC Greenhouse Growers’ Association.

Linda Delli Santi is the executive director of BC Greenhouse Growers’ Association. She can be reached at linda@bcgreenhouse.ca.
Print this page