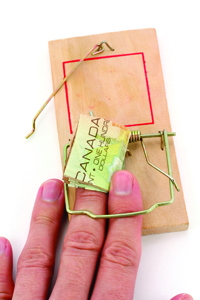 April 23, 2010 – As a garden centre, credit and debit cards are essential to running your
business. Many of you likely receive calls on a weekly basis from credit
card processing companies promising low rates and tempting you to sign
up with their contract. But beware – there are unethical companies out
there and it’s easy to fall into their trap, but very difficult to get
out.

As a garden centre, credit and debit cards are essential to running your
business. They are the preferred payment method for the majority of
Canadians and a safe and quick way to take orders online and over the
phone. Many of you likely receive calls on a weekly basis from credit
card processing companies promising low rates and tempting you to sign
up with their contract. But beware – there are unethical companies out
there and it’s easy to fall into their trap, but very difficult to get
out.

Sarah Flowers*, owner of an Ontario floral and giftware shop, knows
this all too well. Back in 2007, she signed on with a company that
offered a program with a monthly, $20 flat fee that covered her card
transactions, her machine rental and any other related costs for a
two-year term. Soon after, Flowers discovered that things weren’t so
clear-cut.

By signing with this particular card processor, she was subsequently
tied into a four-year leasing agreement and a separate contract with a
credit card processing company. “I had no idea until of course, all the
charges started coming out of the account…It went from $20 to
basically $150 or more a month,” says Flowers. For the past two years,
she hasn’t received regular monthly reports and, when she does get a
statement, it doesn’t clearly identify why she’s been charged
particular fees.

Currently, Flowers is struggling to get out of her contract. She’s been
told she can get out by paying a flat fee, but Internet searches have
proven that it hasn’t been so easy for others and she’s skeptical.
Flowers and a few other local retailers who are dealing with the same
company have now approached the police to see if they can help rectify
the situation. By sharing her story, she’s hoping to prevent other retailers from falling into the same trap. “I’m assuming there’s
probably all kinds of other people in this situation who can’t afford
to get out of it.”

Flowers is correct in the assumption that she’s not the only one in
this situation. “We have had hundreds and hundreds of calls from
business owners who have been taken advantage of by some very unethical
card processing companies,” says Dan Kelly, senior vice-president at
the Canadian Federation of Independent Business (CFIB). “There have
been a lot of companies that have popped up overnight and are selling
card services – they have somebody else process the transaction for
them.”

For busy retailers, a phone call promising lower credit and debit card
processing rates can no doubt be tempting but Kelly
recommends that merchants be cautious and do some researching. Here’s a
list of steps that retailers should follow when they are looking to sign
up with a new company.

1) Ask around
Do a check on this new supplier. “It’s always a good idea to ask for
names of other customers of the particular supplier so you can call and
check to see what someone else’s experience has been like with them,”
says Kelly. “Many people skip that step and end up going off on their
own.” You can talk to local business groups, retail associations like
CFIB or industry specific groups.

2) The fine print
“The biggest complaint that we’ve heard in this industry is that there
are some players, some credit card processors, that will go out and
offer a really low rate, but when you read the fine print, the rate can
be subject to change at any time,” says Kelly. In this situation, the
rates jump dramatically just months after signing the contract. When
the retailer sees the charges, they call the company, ask to cancel the
contract to go with another company and discover they are locked into a
long-term contract with large exit penalties.

3) Know the rates
One of the biggest
hurdles when it comes to these contracts is understanding the rates
that will be applied to each transaction. The credit card processor
typically gives rate quotes for a number of areas, but these are two
to take particular note of:

a) The base rate for a standard credit card such as a Visa or MasterCard.

b) The interchange rate, which applies to premium Visa or MasterCards
that have some type of loyalty program attached to them. This
interchange rate is also applied
to standard credit cards when a transaction is made over the phone and the card is
not present.

To get a good grasp on how the rates will affect your bottom line, expert advises that you ask the company to apply these numbers to your business. Force the credit card processing
companies to go through every purchasing scenario your business and get
the rate for that transaction so now you know what you will pay on
every transaction.

4) Too good to be true
If a company promises to slash your current rates in half, then you
have to question how this is possible. The most important phrase to
look for when signing a contract is ‘rates subject to change.’ These
four words are standard in almost all credit card contracts but Kelly
says you want to read the details as to what is an allowable increase.
“The biggest question to ask is how long is this rate locked in for?
That’s the real test. Most companies will tell you that they can’t
guarantee the rate,” says Kelly. When Visa and MasterCard change their
rates, the credit card processor must also change their rates and will
likely pass the cost on to you. “That part is well accepted. But what’s
happening now is a lot of credit card processors are using that
opportunity to increase their rates themselves, or are just doing that
anytime they want. There have been several fly-by-night operations in
this business.”

5) Legal help
Kelly recommends that retailers seek out legal advice beforehand to
prevent having to seek it out at a higher cost down the road. “It’s not
a bad idea to spend a little bit of extra money and have your lawyer
look at the contract too.” Doing so will help clarify any of the
smaller details and give you peace of mind that the contract is legally
sound.

6) You can negotiate
When you see the contract, know that you can work with the company to
make changes in your favour. You can ask for changes, typically with the term and the
penalties and they will change that if you ask or if you negotiate
with that.

Once you finally decide to sign an agreement with the company, it’s
important that you always keep a close eye on your statements. “Once we
get in a pattern with a certain amount and a certain bill – especially
if you have it set up for automatic withdrawal or payment – you forget
about it and don’t pay close attention to it. This is one area where a
company cannot afford to let the statements stack up on the desk and
not go through them,” says Kelly. Reviewing the monthly statements
allows merchants to hold the credit card processor accountable and
helps the retailer compute the average cost of a transaction. “That’s a
really important area because they need to know, they need to be on
high alert to ensure that they don’t get hit with any unwarranted fee
increases,” says Kelly.

If you do get caught in a situation and the credit card processor is
acting unethically, Kelly recommends that you contact your industry
association or retail association to see if other retailers are
experiencing the same thing. There’s strength in numbers. Another
option is to go to the police and report the fraudulent activity.
Finally, Kelly says being persistent can sometimes pay off. “We’ve had
members who just hound the processor until they let them out of the
contract with a reasonable exit fee.” If you strike up any kind of exit
agreement with the company, be sure to get it in writing.

When dealing with credit card processors it’s crucial to do as much
research as you can. “I would say the best thing to do is to get some
advice from people that the merchant trusts. If they have a good bank
manager, it may be worth talking to the bank manager about who they
would recommend as a card processor,” says Kelly. Other sources could
include local associations and business owners.

The good news is that help may be on the way – the federal government
has recognized that this is a problem and has included a measure to
prevent these types of situations in the credit and debit card code of
conduct draft that was released last November. It contains a provision
that will allow merchants to exit a contract without penalty as well as
rules to encourage more disclosure on average rates. Check out an update on this situation here.

*Name has been changed to protect the identity.