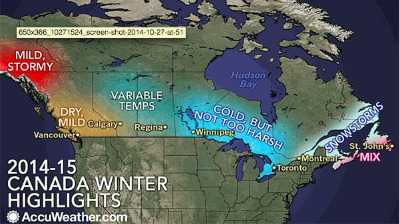 • Atlantic Canada will bear the brunt as an abundance of storms will deliver heavy snow, rain and strong winds throughout the season.

• From the central Prairies to Ontario, winter will not be nearly as harsh as last season, which broke or tied numerous long-standing records.

• Western Canada will also dodge extreme lows this winter with a mild overall season in the forecast as arctic air is diverted elsewhere.

Drier and milder conditions relative to normal will likely dominate this winter across British Columbia, especially during January and February. The winter will be rather placid in the Vancouver area with below-normal snowfall.

Meanwhile, ski country in British Columbia should get off to a solid start in terms of snowfall before a drier pattern takes hold for the middle and later part of winter.

LOWER THAN USUAL SNOWFALL EXPECTED IN MUCH OF ALBERTA

Despite the early September snowstorm, much of southern and western Alberta, including Calgary, will receive less snowfall than usual this winter with slightly above-normal temperatures. There are also indications that this upcoming winter could be windier than average.

Across the central Prairie region, including Regina and Saskatoon, average wintertime conditions can be expected with quick shots of dry, very cold air intermixed with periods of milder weather.

Invasions of arctic air will tend to be more directed into Manitoba and northwestern Ontario this winter, especially during January and February. Despite this, the low temperatures will be less severe than the previous season.

In January and February, the colder weather will suppress the main storm track too far south and east, resulting in below-normal snowfall from Winnipeg, Manitoba through Thunder Bay and Sault Ste. Marie, Ontario.

This will be a relief for many after winter 2013-2014 delivered the snowiest season in 52 years to Winnipeg.

ONTARIO DEEP FREEZE MAY NOT AS SEVERE AS LAST YEAR

Much of southern and eastern Ontario, including Windsor and the greater Toronto area, will end up averaging slightly colder than normal from January to February despite a mild start to the season. The cold will not be as harsh as last winter.

Snowfall will arrive sooner, however. There will be an increased opportunity for a couple of significant snowfall events during the month of December with an active storm track nearby.

However, less snowfall than usual is forecast for January and February, as the region generally remains a little too far north and west of the primary storm track.

ABUNDANCE OF STORMS EXPECTED, FROM SOUTHERN QUEBEC AND EAST

There will be an abundance of storms this winter from southern Quebec through much of Atlantic Canada. This pattern will result in a higher probability for major snowfall events for locations such as Montreal and Quebec City on eastward toward Moncton, New Brunswick.

Skiers and snowmobilers across eastern Canada should expect fairly typical winter conditions overall, but with the reduced threat for sustained, bitter cold, especially from the eastern Great lakes to Quebec.

Despite the stormy outlook, areas from Nova Scotia to Newfoundland, including Halifax and St. John’s, will escape the worst of winter’s cold thanks to a combination of increased cloud cover, prevailing winds and above-normal surface water temperatures.

Even though temperatures will be milder this winter, seasonal snowfall will still end up above average over much of the region due to the higher potential for large storms that produce heavy, wet snow.