Features
A year of strawberries, year-round

After a successful year, Quebec’s Winter Farm hopes to find new partners, and reduce the amount of strawberries Canada imports each year 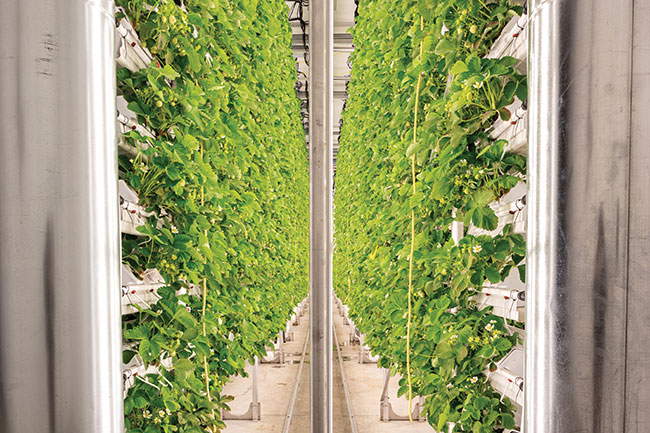 This operation opened last year, and is the largest vertical strawberry farm in Quebec. Photos Provided by winter farm

Nestled in Vaudreuil-Dorion, Quebec, is a record-setting strawberry facility, one that—its partners hope—will provide fresh, local fruit year-round, and relieve Canada’s reliance on imports for much of the year. The facility is a partnership between Winter Farm, a Quebec-based indoor vertical farm company, and Les Serres Vaudreuil, which has been operating in its namesake town for decades.

The operation opened last year, and is the largest vertical strawberry farm in Quebec. The partnership saw Winter Farm provide the tech, and Les Serres Vaudreuil handle the operations. The decision to start growing strawberries was a deliberate one, according to Alain Brisebois CEO of Winter Farm. Broadly, vertical farms have been used to grow leafy greens. Instead, the partnership between the two groups chose something of an oddity, and what Brisebois calls a challenging crop. “The intent was not to do leafy greens, because we think there is already [too many people] in it,” he said.

Les Serres Vaudreuil employs 50 seasonal workers, and operates a garden centre and locally well-known fruit and vegetable market. Beyond the strawberries, they grow numerous other kinds of produce in their greenhouse, including tomatoes, cucumbers, and peppers, along with flowers for people’s gardens. In their fields, they grow pumpkins, corn, asparagus, wheat, soybeans, and other crops as well.

Among its rows of lit stacks grow many thousands of plants in what is, in terms of square footage, a relatively small space. In all, the vertical farm sits at a humble 1,150 square metres. However, it has the ability to produce almost 2.5 hectares of what would be possible in traditional greenhouses. According to Brisebois, when people visit the farm, they tend to have an “aha” moment about the actual size of the operation, considering its 25 feet worth of height, and their stacks are 14 levels high. They chose strawberry varieties that are fairly well known in Quebec, including albion.

When the vertical farm was announced, it was anticipated to produce 180,000 kilograms of strawberries each year between October and June, though, currently, they’re sitting at around 100,000 per year, produced by 51,000 plants. The most productive greenhouse strawberry operations end up yielding between 12 and 14 kilograms per square metres. In Les Serres Vaudreuil’s vertical farm, it’s closer to 116 kilograms per square metre.

“It is a different world,” Brisebois said. 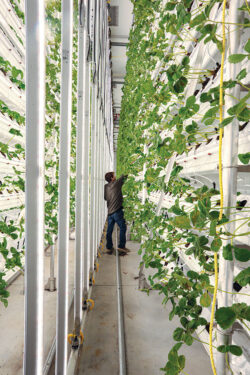 Moreover, the facility can produce locally-grown strawberries between October and June. For most of the year in Canada, the berries are imported from California and Mexico, Brisebois said. In all, Winter Farm has a goal of replacing 10 percent of strawberry importation into Canada. Brisebois noted, however, that of this 10 percent, the locally and vertically grown strawberries are geared towards the premium level, selling baskets at closer to $5.99, compared to imported ones for a few dollars cheaper. However, the locally-grown strawberries are inevitably going to be fresher than ones brought in from abroad, which spend days in transit from when they were picked.

“We thought there was a need for more local production,” he said. “[It doesn’t] cross the entire continent before it gets to you. That’s the overall idea—local production as much as we can.”

Despite being grown vertically, these strawberries are, in their own way, grown in a fairly similar fashion to their kin. They use the regular coco substrate, gutters, and an irrigation system, for example (the operation doesn’t use pesticides, however). They even use bumble bees as pollinators—they were chosen as they are a little less aggressive compared to other kinds of bees. The exceptions being that they are grown in climate-controlled conditions in indoors, and using LEDs, which run each day and also replicate the sunrise and sunset across the rows of plants. “Everything is 100 percent similar,” Brisebois said.

Another difference comes down to the HVAC system. Considering the facility has upwards of 50,000 plants, there is a great deal of humidity to contend with, so they’ve developed more powerful HVAC and humidity control systems. Between all of these factors, the operation attempts to mimic the kind of ideal strawberry growing conditions found in most commercial greenhouses.

Each plant is also hooked up with a sensor that feeds information to an AI system. These sensors capture info about what the plants need (more water or more air, for instance). Beyond alerting the growers to the plants’ needs, it also teaches the AI to find the best growing conditions for the strawberries to maximize yield and quality, Briebois said. He added that this is easier than having humans going around and checking each plant’s conditions manually.

The indoor facility also recycles heat, which Les Serres Vaudreuil can use to warm other parts of its operation. Water flows through tubes near aluminum components of the LEDs used to replicate the sun’s light. This heats the water which is, in turn, pumped towards the rest of the operation, providing an alternative to relying on other heating methods. Beyond that, the water also helps keep the LEDs, themselves, cool. 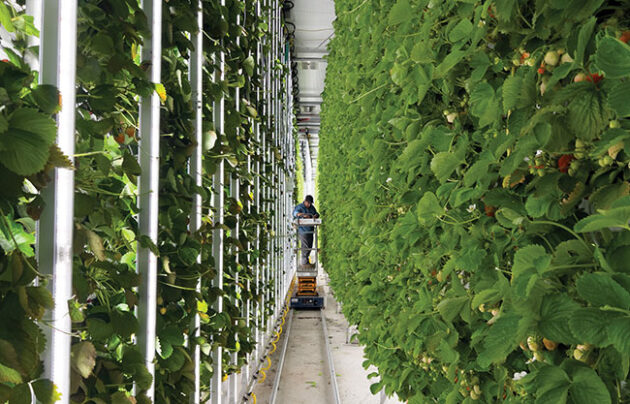 Considering the facility has upwards of 50,000 plants, there is a great deal of humidity to contend with, so they’ve developed more powerful HVAC and humidity control systems.

It is still early days for the facility. But, considering it has only been in operation for one year, it has been able to distribute to 15 different IGA stores near Les Serres Vaudreuil. “The biggest impact is that for the first time, we are harvesting all year around because of the heat that the Winter Farm gives us,” the email from Saint-Denis said, and added that its heating bill dropped by 90 percent for the farm’s lettuce greenhouse.

Even though Winter Farm’s offerings have only been tested for one year, the group has some big ambitions. While, right now, they are relatively small in scale, they hope to scale up and help produce even more crops. According to Brisebois, they are currently meeting with other interested growers in Canada, the United States, and even Europe. He added that they have received a good deal of interest, and that the company is focused on finding the right partners. According to Saint-Denis, this includes continuing the partnership between Winter Farms and Les Serres Vaudreuil.

“We are currently building the second unit and have a lot of ideas for the future. We aim to remain Winter Farm’s center of R&D. Having a Winter Farm helps us to produce year-round, develop new markets and to better plan our income.”