Most flowers grown in gardens need constant maintenance with water and nutrients, but a University of Guelph researcher is studying the drought tolerance of a plant native to Canada – and he’s finding it
doesn’t need much help to survive. 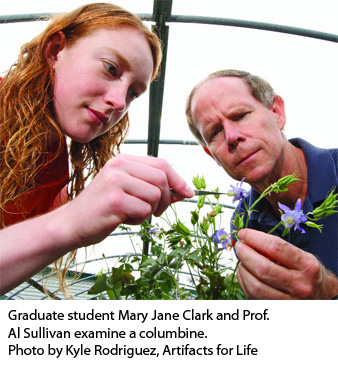 Most flowers grown in gardens need constant maintenance with water and nutrients, but a University of Guelph researcher is studying the drought tolerance of a plant native to Canada – and he’s finding it doesn’t need much help to survive. He anticipates that a breeding program developed for the plant could see local growers benefit from propagating and selling it around the world.

Prof. Al Sullivan and graduate student Mary Jane Clark, Department of Plant Agriculture, are part of a research team studying the columbine, a flower species known for its attractive bell-shaped bloom that comes in a variety of colours and is good for attracting hummingbirds.

Columbines can be found in meadows, woodlands and higher altitude areas throughout the northern hemisphere. Growing in these challenging northern climates is why many columbine species are so resilient and drought resistant. Sullivan wants to learn more about the plant’s tolerances to such environments to determine how it can be used to benefit local growers.

“To make a contribution to Ontario and Canadian growers, we needed something that was unique and would provide a competitive advantage,” says Sullivan. He believes the columbine species could be just that.

To further his knowledge of the growth needs for columbines, Sullivan put 20 species to the test using three different water regimes. His goal was to identify the species that had the most genetic variability so it could be used in future breeding programs.

The study assessed the plants during two phases: a vegetative and a reproductive phase.

The vegetative phase saw the perennial plants put in cold storage for eight weeks so they would go through a dormancy period. Following this, they entered the reproductive phase where the different water regimes were used.

Plants were given either a drought, low-water or luxurious-water treatment. Plants receiving the drought treatment were only watered when under stress and began to wilt. The low-water group was given enough water to prevent wilting. The luxurious treatment had plants watered frequently to ensure the soil was kept moist; the plants were expected to gain full genetic potential.

There was a wide range of results among the different species. While some died under the drought conditions, others thrived and were even able to produce flowers.

These findings led Sullivan to conclude that columbines can grow with very little environmental input. He says that under normal conditions, they didn’t need to receive supplemental water or nutrients, and competed with other plants. The plants also didn’t need full sun exposure, which is particularly beneficial for growers in greenhouse settings – they can save money by not offering extensive supplemental heating, as tropical plants need.

A horticultural setting such as municipal gardens could also benefit from growing columbines, says Sullivan. At first the plants would need water and a small amount of nutrients, but once established, they would be almost maintenance-free and bloom for long periods during the summer. This would save having a maintenance crew come back once or twice a week to water and fertilize.

The drought-tolerance abilities also mean the plants could survive periods during July and August in Ontario when precipitation events can be spread more than two weeks apart.

When it comes to native plants, little information is readily available to growers about topics such as nutrition needs, precipitation tolerance and the effects of planting early or late in the growing season. Because of this, Sullivan has focused his efforts on breeding programs for Canadian plant species.

“Few people are breeding native species,” says Sullivan. “When we think of native species, we tend to think of plants that are weedy, tall and gangly, and the only people interested are botanical gardeners, but there are so many more opportunities to target other markets.”

Currently, many flower species are imported to Canada from breeding programs around the world for plants such as impatiens, tulips and snapdragons. Local greenhouse growers and seed companies pay millions of dollars to the countries of origin through royalties.

“If Canada can identify native species that have beautiful flowers and are drought-tolerant, then they can be marketed to the world,” says Sullivan. “It could have huge financial benefits for Canadian growers to control the rights to such plants.”

Sullivan hopes that one day, columbine species native to Canada will be among those plants giving back to local growers.

Also involved in this research are graduate student Mary Jane Clark and technician Rodger Tschanz of the Department of Plant Agriculture.

This research is funded by the Ontario Ministry of Agriculture, Food and Rural Affairs, and Flowers Canada Ontario.

Sarah Van Engelen is a writer with SPARK (Students Promoting Awareness of Research Knowledge) program at the University of Guelph. n