To maintain plant health, Ben uses Plant Grow from Laguna, which is safe for fish and will not affect water quality. 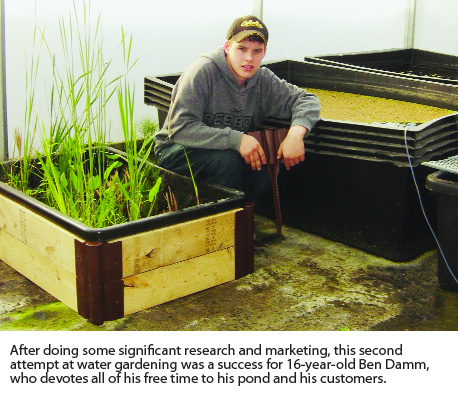 When Ben Damm’s parents, Louis and Marian, gave water gardening a try at their Floral Dimensions shop in Fenwick, Ontario, they were disappointed with the results. “The first year was a trial run to see if it would be accepted (by the customers) in the area,” explains Ben, “but the knowledge wasn’t there.”

The staff did not know how to properly maintain the water garden’s plants or fish, or how to sell them. The marketing also failed with the wrong displays at the shop and poor promotional advertising. Their first attempt at water gardening was abandoned.

A few years later, Ben was given the go ahead by his folks to try the water garden once again.
Taking full responsibility for the project, the 15-year-old oversaw the construction of a five-by-30-foot above ground tank. Once the liner was in and the tank filled, Ben looked into filtration systems and pumps and found a system from Laguna that suited his needs nicely. The next step was finding plants that were both suitable for maintaining a closed eco-system yet also desirable to customers.

Ben started with plants for the outer margin of the pond. Some of the marginal varieties chosen were irises, cattails along with some hardy pond orchids. Good oxygenating plants were also needed for cleaning the water and Ben went with horn wart and Canadian water weed. He then added some floating plants such as water hyacinth and water lettuce.

Fish came next and Ben says goldfish make good starters. He has also added koi, an ornamental member of the carp family, and is trying an albino catfish on a trial basis. Of the latter, Ben says they are generally best suited for large, mature ponds where they are less likely to eat their young.
After doing some significant research and marketing, this second attempt at water gardening was a success. This all happened last year, and today 16-year-old Ben devotes all of his free time to his pond and his customers, which is generally after school and on weekends and holidays. For those customers who want Ben’s advice during school hours, they can leave a message on his cell phone and be guaranteed a call back as soon as possible.

Before garden centre operators consider adding a water garden to their operation, Ben offers a bit of advice. “In order to have fish, you have to be really good with fish,” he says, as do your employees. Ben suggests checking out what the competition is selling before ordering. “It’s not really worth it if they don’t sell,” he added.

Start with a small quantity and add more as you begin to feel more comfortable. Ben tries to keep turning over his inventory so customers have something new to see each time they visit. He ordered new fish and plant supplies three times last year.

You also need a good supplier for your stock. Ben uses Water’s Edge of Port Hope, Ontario, as his sole supplier for fish and plants. The fish there are raised in bio-secure disease-free above ground ponds so there is little danger of new additions infecting Ben’s stock.

To maintain plant health, Ben uses Plant Grow from Laguna, which is safe for fish and will not affect water quality. “You need less (plant food) if you have fish in the system,” he noted.
The wholesale price Ben pays for his fish range from $1 to $80. He retails them anywhere from $4 for a young goldfish to $150 for a koi; however, a prize koi can fetch upwards of $1,500. “Most customers like a smaller fish so they can watch it grow, but a few are impatient,” says Ben, and are willing to pay handsomely for a mature beauty.

With the fish conveniently contained in a small, shallow pond, they are easy fodder for predators so deterrent systems are needed. Herons and king fishers can be deterred by decoys or sprinklers, but “the simple solution is to put a fishing line along the edge of the pond; the heron trips and won’t come back. They spook easily,” says Ben.

“Find out who the natural predators are for your stock and ask the Ministry of Natural Resources for safe deterrents,” says Ben. He added he has had only one death in his pond system, and that was because a fish had jumped out.

One way to avoid the issue of predators altogether is with a tabletop water garden that Ben sells. He also took a welding class at school so he could build a metal framed “fish retail system” he designed to sell to other garden centre operators. The tank measures 12 feet long, two feet wide, three feet high and holds 600 gallons. He noted there are other systems already on the market such as one offered by Aquascapes which sells for around $2,000.

A big selling feature for above ground displays is that they are child friendly and safer than an open in-ground pond which should be enclosed if there are children around, says Ben. He added that his parents kept him out of their pond when he was a child by telling him “there are crocodiles in the pond,” which seemed to work for him.

After a successful run last year, Louis and Marian have given Ben permission to construct a new water garden near the front of their shop. Ben has been working closely with a certified landscaper in order to get the design just right. Heron Pond Landscaping, Smithville, Ontario, is doing the construction and Ben hopes it will be ready for his customers to see by early June.

The water garden business tends to get rolling as the weather warms, usually by the end of May, early June, says Ben. “Pond owners always add a bit more every year, and good quality is important to compete and for return business,” he added.

“You have to have a trust factor with your customers,” says Ben, who seems to have it in spades. And his customers will be able to see more of him once school is out. Until then, they can always reach him on his cell phone.