The facility will enable NFP to grow vegetables locally that offers food security, food safety and traceability of multiple varieties of vegetables including lettuce, basil, cilantro and spinach. 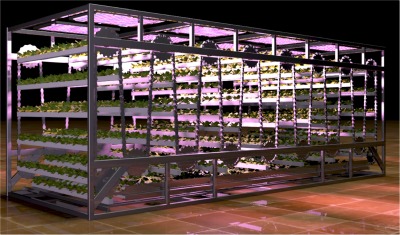 Under the terms of the agreement, NFP and Urban Barns will enter into a definitive licensing agreement where specific milestones, royalty rates, and technical services will be agreed to no later than Aug. 30th, 2013.

"We are delighted to welcome NFP as our growing partner in Newfoundland with plans to cover the three maritime provinces,” said Richard Groome, president of Urban Barns and director of strategic marketing.

"The Newfoundland Growing Facility is a step in our national coast-to-coast expansion plan on establishing growing facilities in key target markets, including Quebec and Ontario."

It’s an exciting project for Newfoundland Fresh Produce. "We are delighted to become an Urban Barns licensee on the East coast of Canada and bring our fellow Canadians fresh produce grown locally 12 months per year,” said NFP president and CEO Stephen W. Bruce.

CURRENTLY, ALMOST ALL PRODUCE IS SHIPPED IN

Over 90 per cent of the produce consumed in Newfoundland is brought in via trans-continental road transportation, then by ship. With the Urban Barn's growing technology and methods, NFP will be able to supply fresh produce picked the same day, year-round and at a competitive price.

“This is indeed a major breakthrough in the Newfoundland food supply chain eliminating multiple thousands of "miles-to-market," said Bruce.

The first operational facility should be up and running by the fall of 2013, with other facilities to follow throughout the province. The company will serve the food service and hospitality sector, in addition to food retail chains.

Based on a study published in 2007 by the Department of Natural Resources of Newfoundland and Labrador, it was estimated that in 2005, less than three per cent of the lettuce consumed in the province was locally produced.

The same study established that the combined potential for locally produced vegetables in the province was at over $42 million per year.

Newfoundland Fresh Produce is planning to grow and distribute locally grown, fresh produce year-round in the Atlantic provinces, starting with Newfoundland and Labrador.