British Columbia is leading the way, increasing production and research initiatives over the next few years. 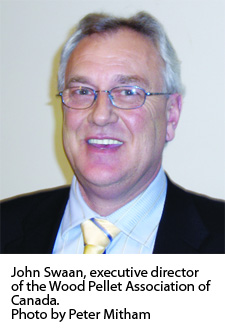 Greenhouse growers have plenty of alternatives to natural gas for heating their greenhouses these days.
Good thing, too: with natural gas prices once again rising into the double digits this past winter, many growers are looking for cheaper alternatives to fossil fuels as well as ones with less impact on the environment.

“The greenhouse industry in Canada is probably the industry most susceptible to increases in the price of gas,” Dr. Fernando Preto, a research scientist in advanced combustion technologies with Natural Resources Canada, told growers attending the Pacific Agriculture Show in Abbotsford, B.C.

Among the choices available to growers are wood waste, methane collected from landfill sites, and gasification of manure and other farm wastes.

Dr. Preto, who is coordinating a national study of biomass for the greenhouse sector, said waste from the B.C. forest sector alone could provide growers with 37 million gigajoules of energy, triple total grower demand in that province.

Growers should consider organic materials that are easily pelletized, as these are easier to store and transport, and offer better value for overall density. “If you have a product that can’t be easily pelletized, you’ve got to figure out what to do with it.”

Dr. Preto said the low density of biomass and a lower energy content than traditional fossil fuels make local sources important to its

To date, wood waste has proven to be the most easily pelletized form of biomass.

Typically made from sawdust, a ton of pellets puts out approximately 20.4 gigajoules of energy. With a price of less than $5 a gigajoule in the province, including transportation, Swaan said the pellets are a competitive alternative to natural gas.

To date, 16 members of the B.C. Greenhouse Growers Association use wood pellets as fuel. Their total
annual consumption runs about 12,000 tons. Swaan said the demand isn’t about to overwhelm producers.
There are currently seven pellet plants in B.C. producing 600,000 tons of pellets annually, with an additional six plants set to come online in the next 18 to 24 months. Canada has 19 plants producing just over a million tons of pellets each year.

Canada’s production is significantly higher than the U.S., where 60 plants produce about 800,000 tons of pellets primarily for industrial users.

About half of B.C.’s production goes to Europe, where the pellets are a valuable source of renewable fuel for power generation plants. Capitalizing on that demand, Swaan said the province hopes to double its pellet production to 1.35 million tons in two years and achieve a production of 2.8 to three million tons by 2011.

“These are conservative estimates,” he said. “We’ve got everything you need here, but a lot of it will still be going to Europe.”

Swaan said the eight-member Wood Pellet Association of Canada plans to sponsor a research chair at the University of British Columbia and a research centre that will investigate issues related to the use of wood pellets.

Greenhouse growers, as industry stakeholders, will probably be asked to support the association’s research through their own association.

Swaan said pellet research will examine the environmental issues associated with using pellets as fuel, analysis of chemical and particulate emissions, and the potential to capture carbon dioxide and use it for crop utilization.

Dr. Preto said users have to develop strategies to minimize public concern over the use of bioenergy. “The
industry has to end up policing itself.”

In addition, implementation of a biomass system should take into account the cost of the system relative to the overall business, the cost of having trained operators, and also the cost and regularity of equipment maintenance to ensure they are operating at the maximum possible efficiency.

Peter Mitham is a freelance writer and photographer in British Columbia.