It’s not every day that a single plant can create a tsunami of interest in the plant world, but the Wollemi pine has undoubtedly done it in spades. 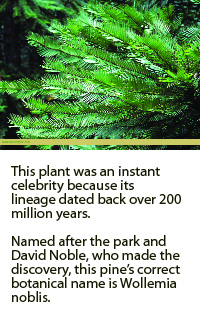 This amazing tree was known only from a fossilized form dating back some 90 million years; that was until 1994 when an officer with the New South Wales National Parks and Wildlife Service discovered it while out trekking with friends in a deep canyon, ironically only 200 kilometers from Sydney, Australia.

David Noble noticed this very unusual tree and took a fallen branch home to be identified. It ended up in the hands of experienced botanists who declared it a new genus. This plant was an instant celebrity because its lineage dated back over 200 million years. The exciting news spread quickly and internationally, creating a huge interest worldwide.

This pine was named after the park and David Noble who made the discovery. Its correct botanical name is Wollemia noblis and, along with some well-known relatives such as the Norfolk pine and the monkey tree, it is a member of the araucariaceae family. Wollemi is an aboriginal word meaning “look around you, keep your eyes open and watch out.”  In all, there are approximately 100 original trees growing in the Wollemi National Park.

This conifer will reach up to 40 metres tall and has quite unusual dark green foliage, similar to some of its araucariaceae cousins. As it matures, it displays a bubbly brown bark, and it also has a habit of sprouting multiple trunks. Because of its location in the Blue Mountains, it is tougher than most sub-tropical plants, tolerating temperatures as low as -12ºC and as high as 45ºC. Since new plants have only recently been sent to botanical gardens around the world, its true hardiness has yet to be determined. It has, however, survived winters in Washington, D.C., Germany and Japan.
The Australian government deserves credit for its determination to both protect and conserve this new species. The Wollemi pine has been listed under the Commonwealth Environment Protection and Biodiversity Conservation Act of 1999, as well as the Threatened Species Conservation Act of 1995. The New South Wales National Park and Wildlife Service has taken further steps to protect the original trees: visitors to the site are limited to scientists and other researchers and measures have been taken to protect the trees from wildfires.

The cones on the trees are both male and female, making each tree’s female cones viable for germination. Propagation is also being done both by cuttings and tissue culture. The Royal Botanical Garden Sydney (RBGS) has been exclusively licensed both to propagate and market this plant worldwide. There was a huge buzz when the first trees were sold by auction through Sotheby’s in Australia. It was like an international art auction, and botanical gardens and others with sufficient bidding dollars paid in the many thousands for the first trees, along with, of course, bragging rights. The first trees were planted in protected, high security facilities. It was actually quite funny to see them ‘locked up.’

If you live in an area rated zone 5 or lower and would love to have one, they make surprisingly good houseplants. When kept in high indirect light and with reasonable care, they actually do quite well indoors. As for outdoors, they require good light, good drainage and winter temperatures above
-12ºC, at least until we discover how cold tolerant they are.

To ensure that royalties are returned to fund the intended conservation goals, all plants will be sold with authentication certificates.   A good supply will be in garden stores in Canada by spring 2007.  Currently, Nordic Nurseries in Aldergrove, BC is the only Canadian supplier of these trees, and I have been told that with good garden centre support, this great plant can be kept with the independent garden centres.

It’s a golden opportunity to practice conservation, to support our industry and to provide an exciting new plant to the Canadian market.  It’s a great story and a great plant that is being saved and shared around the world.

Did you know: Canada is home to more than one-tenth of the world’s forest. One tree can filter up to 60 pounds of pollutants from the air in one year.