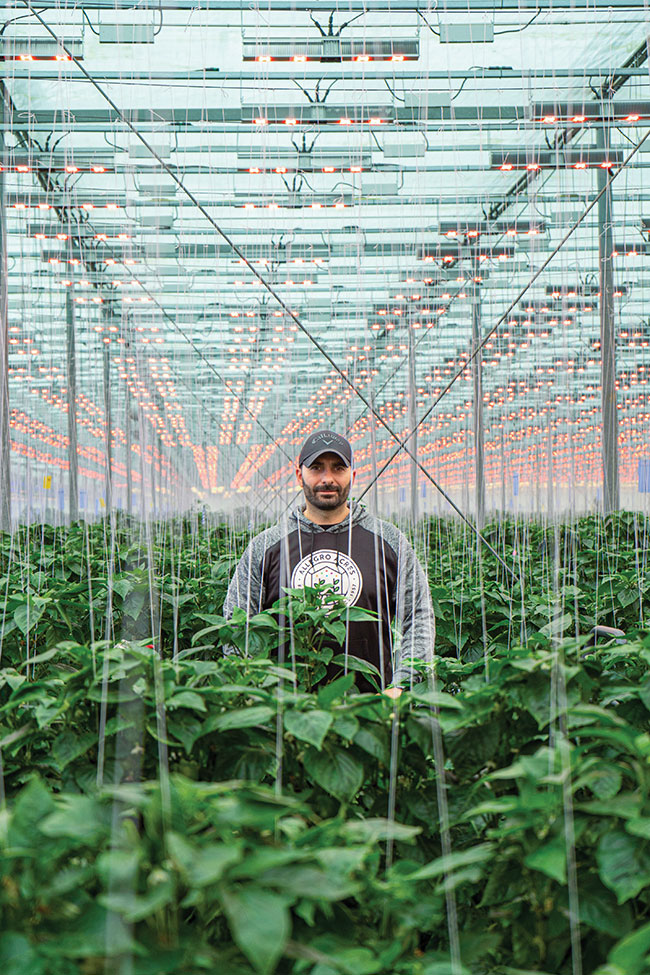 Gene Ingratta has been immersed in the world of greenhouses since he was a small child. Learning the trade from his parents as a young boy (who learned the trade from his grandparents), this third-generation grower remembers how different the industry was growing up in the 1980s.

“There were about 400 acres of greenhouses in southern Ontario. The farms were a fraction of the size they are today,” Gene recalls.

Growing up, he says three acres was a decent-sized farm, and it would cost about $150,000 an acre to build.

“They were eight-feet-tall. The vents and heating were manually operated by pulling on a chain, and the plants grew right in the soil with straw coverings to help retain moisture. They were irrigated by a little sled connected to a garden hose that was pulled from one end of the row to the other.”

Gene recalls spending a good part of his youth harvesting tomatoes by hand in wooden crates and making cardboard boxes by hand to pack the product in manually.

“We produced half as much as we do today and got paid twice as much. Today, southern Ontario boasts around 3,500 acres of greenhouses and is continuously expanding. Thirty acres is now the new starting acreage for most agro parks, with several facilities having well over 100 acres,” he says.

Currently, it costs about $1.8 million an acre to build a state-of-the-art facility with 24-foot-tall glass ranges with vents, heating and hydroponic irrigation systems that are now fully automated and controlled by climate computers right from growers’ smartphones.

The harvesting is still done by hand, but automation is knocking on that door, Gene notes.

“Packing facilities now encompass a couple acres of space and are filled with cutting-edge technology, robotics and automation to help keep us efficient, sustainable and competitive. Today, production has doubled and tripled what it used to be, but market pricing is much more competitive,” he says. 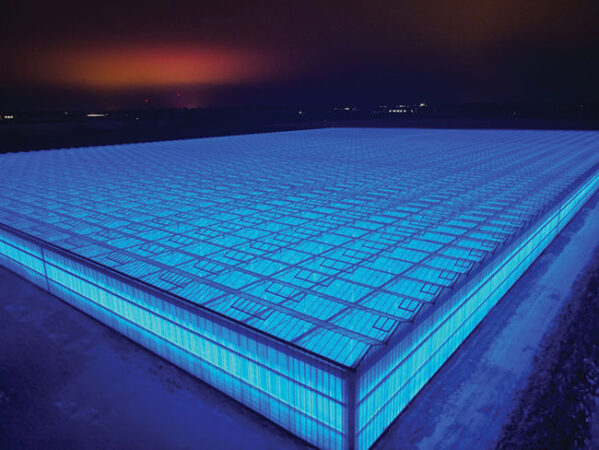 It is the first Canadian greenhouse operation to grow bell peppers commercially in the winter using LED technology.

Branching out
In 1998, while finishing up his agricultural studies at the University of Guelph, Gene started having discussions with his parents, Nick and Margaret, about building a new farm in Ruthven, Ont.

“First thing we needed was a name and back then we couldn’t Google information, so I bought an Italian-English dictionary and started leafing through it,” Gene recalls. “I didn’t have to look long until I saw ‘allegro’ in the first few pages, which in English means ‘Happy, cheerful,’ and so, Allegro Acres was born.”

Fresh out of university, Gene was eager to put his education to work and continue his parents’ legacy.

“After months of preparation, planning, and paperwork, construction finally began on our first phase of six acres in the spring of 1999, and in early 2000, we planted our first crop of tomatoes. Without the support and guidance of my parents, Allegro wouldn’t exist, and I wouldn’t be where I am today,” Gene says. 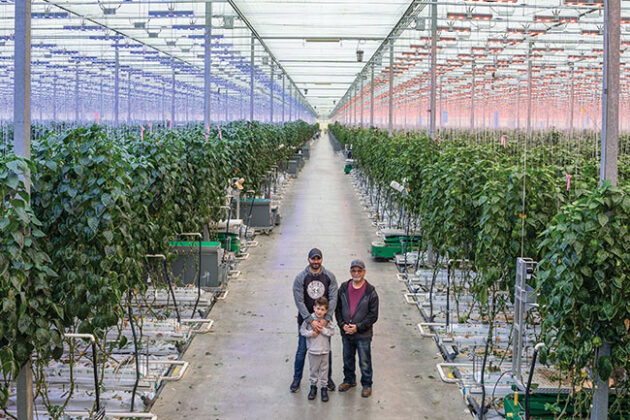 Gene Ingratta, a third-generation grower, poses with his son, Maverick, and his father, Nick Ingratta, among some of the many pepper plants growing at Allegro Acres.

LED leader
Up until 2018, Allegro Acres focused on growing tomatoes and peppers, but after installing high-level pepper packing automation, and with the threat of the tomato brown rugose fruit virus looming, Gene and his team decided to convert the entire farm to growing solely bell peppers.

In the summer of 2019, a newsletter from the Ontario Greenhouse Vegetable Growers (OGVG) was sent out with an opportunity to install LED’s from a new Canadian company. Allegro Acres, eager to try new things, embraced the opportunity and took on the daunting task of installing dynamic LED lighting in one of their phases. This has allowed Allegro to become the first Canadian greenhouse operation to grow bell peppers commercially in the winter using LED technology.

“Using artificial light is an entirely different way of growing crops. You must educate yourself on what micromoles and DLI means and what your target levels need to be at every stage of the crop so you’re not over-lighting,” he says. “You need to learn how to manage your environment while being a good neighbour, and not letting any light escape from your greenhouse at night. You need to become an expert in electricity peaks and usage while understanding the associated costs, so you know when to keep the lights on or off.”

With all of that in mind and with very little information available on growing peppers under lights, this was the reason Gene and his team decided to install LED fixtures from Sollum Technologies out of Montreal.

“It was important to us to support a Canadian company and we wanted to have the most flexibility possible in lighting spectrums and intensities, as we didn’t know what types of challenges we would be facing growing peppers through the winter,” Gene says. “With the help and support of OMAFRA, OGVG, AAFC, AAC, SDTC, Save on Energy and the IESO, we were able to install these fixtures in one of our phases and develop a base line for growing peppers under lights. Now, with a couple years of experience under our belts, and with the capabilities of these fixtures, we’re changing our spectrums based on time of year and different varietal needs, while the intensity dynamically changes based on solar radiation and electricity pricing.”

Efficiency is key
One of the key factors in Gene’s success over the years is his willingness to implement the latest technologies to optimize sustainability, operational efficiencies, and pest management. He says that being efficient is no longer a luxury, it’s a necessity.

“After the pepper weevil pandemic in 2016, we installed insect netting from Holland Gaas B.V. on all our vents and openings to prevent and limit weevil and other major pests and diseases from entering our premises. We also started working with Ecoation to monitor and mitigate pest and disease pressure and to be much more proactive with our IPM strategies. Both of these technologies have helped keep our production up and our input costs low,” he says. “This past year, we installed new energy screens and light abatement screens from Svensson, which has helped reduce energy usage by 40 per cent, keep a more homogenous climate and prevent any artificial light from escaping the greenhouse at night.”

“With our weather patterns getting warmer and drier, this system has really enabled us to keep our growing conditions at an optimal level no matter what Mother Nature throws at us,” Gene says. “It has given us the opportunity to keep the greenhouse temperature and humidity at very comfortable levels, keeping our crops and employees very happy and efficient. In my opinion, this system is now as important as an irrigation system.” 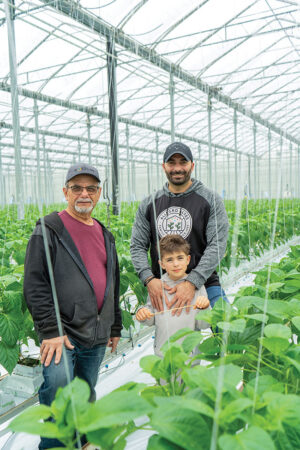 After finishing up his agricultural studies at the University of Guelph, Gene Ingratta was eager to put his education to work and continue his parents’ legacy by building a new farm in Ruthven, Ont.

COVID constraints
Skilled labour shortages have been felt in almost every sector across Canada since the start of the COVID-19 coronavirus pandemic, and the greenhouse industry is no exception.

“It’s always hard to find good people that want to put in the time and effort it takes to succeed in any business, the greenhouse industry being no different,” Gene says. “It was hard before the pandemic, but COVID brought on all types of new headaches and challenges. Our industry is very reliant on the temporary foreign worker program, and without these hard-working men and women, our industry wouldn’t exist.”

“Many times, a lot of us were ready to throw in the towel, but the show must go on, as we want and need to continue providing Canadians with fresh local produce year-round,” he says. “Like always, the entire industry rose to the challenge, overcame it and we’re all better growers and operators because of it. I owe a special thanks to our HR manager Amy Cochrane-Knotek, our labour manager Jacky Garcia, and especially our farm manager, Eusebio Fortuna, who never faltered in the face of adversity and really helped to keep things afloat during those very difficult times.”

Another set of challenges created by the pandemic are the massive supply chain issues being felt around the globe.

“The supply chain issues have caused extreme delays and incredible increases to all our input costs, with every single one rising from five to 100 per cent more than it was just a year ago. This year, greenhouse farmers will see an extra $15,000 to $30,000 per acre in operating costs due to this unbearable inflation. We must be more efficient, sustainable, and productive as ever, and pray for some help and relief from the marketplace and our governments,” Gene says. 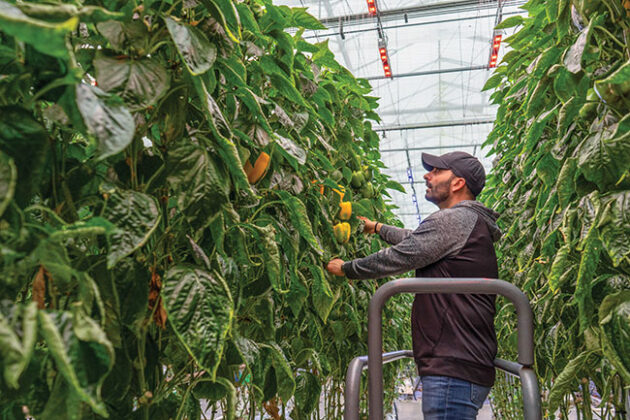 Gene believes in giving back to the local community. Every year, Allegro Acres donates peppers to those in need and sponsors local youth sports teams and municipal events.

Giving back
Gene believes in giving back to the local community that has supported him over the years. Every year, Allegro donates to those in need, whether it be donating peppers to shelters, retirement homes, schools, hospitals and health clinics, to sponsoring local youth sports teams and municipal events.

“Our community has done a lot for us, so it’s important to us to try to give back whenever possible,” Gene says.

Gene also contributes to Canada’s greenhouse industry on a larger scale. He works with the University of Windsor on experiments, data collection, energy and water conservation, and much more. He has also participated in virtual meetings with professors and students to teach and advise.

When asked what advice he would offer to a young person that is considering a career in the greenhouse industry, Gene’s answer is “balance.”

“The key to success at any job is finding the right life-to-work balance, but plants don’t take days off and there’s no such thing as statutory holidays in farming,” he says. “The greenhouse industry is moving, changing, and growing faster than ever. If you like being at the forefront of evolution and watching technology make a real difference in how we all grow, produce, package, market and distribute fresh local food to the rest of the world, then this could be the perfect career path for you.”

Gene adds that if you’re looking to start up your own greenhouse company, you better be prepared.

“Make sure you’re very well financed, prepared, organized and educated. Never stop learning or asking questions, and always be proactive instead of reactive,” he says.

As for winning Greenhouse Canada’s Grower of the Year award, Gene says the distinction should go to more people than just himself.

“While I’m extremely humbled and grateful for this recognition, this really is a Team Allegro award, including my parents, my family, Amy and Maverick, our outstanding employees and all the suppliers we work with,” he says. “Given what every grower, owner and employee in the industry continually endures, especially over the past two years, everyone deserves an award acknowledging their amazing achievements.”