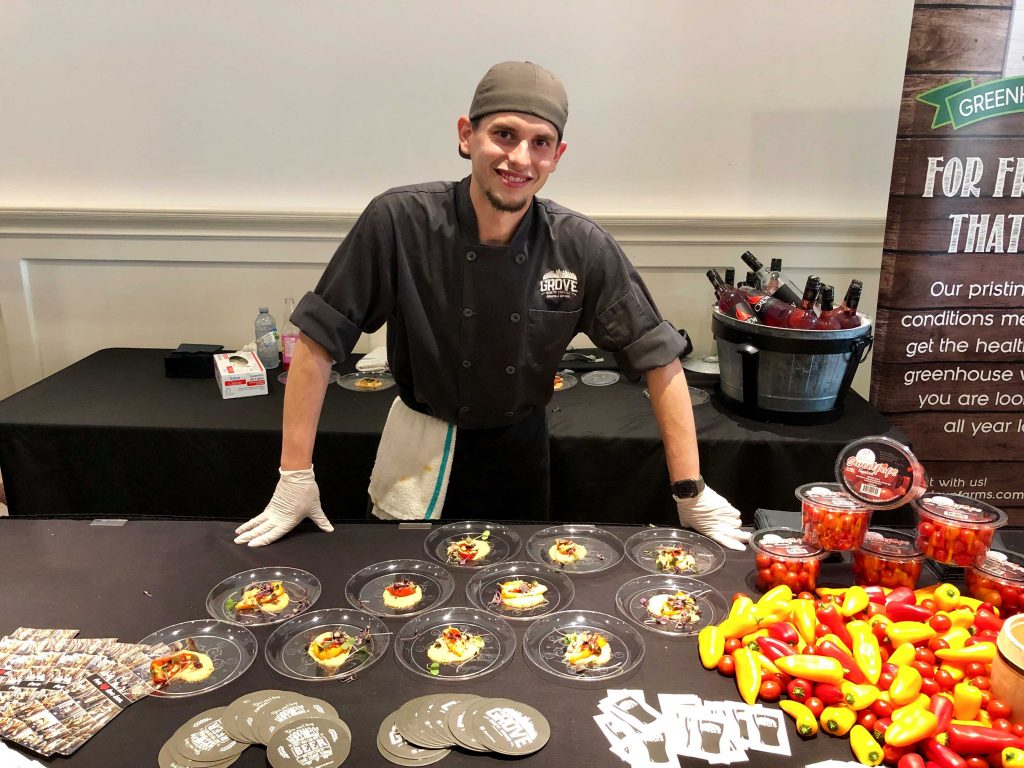 Presented by Libro Credit Union, Battle of the Growers is an annual event that supports United Way’s On Track to Success program in Leamington.

Recruited by last year’s winner chef Bill Deslippe of Smashed Apple Catering, six local teams competed across the county this year. Selected by random draw, each team was assigned a greenhouse operation, a culinary expert and a local winery, highlighting the culinary culture of the region. Over 230 guests were presented with appetizers and wine pairings at the sold-out event.

“The dish created by Brandon Zeuch and Luke Soulliere from The Grove Brewhouse with our Sweetpops and Sweetpeps, “Porky’s Pepper Poppers”, paired with the 2018 Red Sky at Night Rose supplied by CREWinery was incredible,” says Leona Neill, director of marketing and packaging at Red Sun Farms, in a press release. “The way the flavours complimented each other coupled with the colours and textures from our delectable produce was just perfect.”

Attendees also voted for their favourite dish. Crowned crowd favourite was the Cajun Chicken Ratatouille, prepared by Wolfhead Distillery with cherry tomatoes from JC Fresh and paired with a selected wine from Oxley Estate Winery.

“Events like this are so important for the community,” adds Neill. “Not only does it bring awareness to the greenhouse industry, but it also allows us to showcase how flavourful and versatile our produce is. It also introduces the community to other local businesses – all the while raising money for a great cause.”

Fresh produce used in the dishes were donated by greenhouse growers, while time and product were donated by the chef and winery on each team. Proceeds from the event have raised $50,000 so far – enough to support 10 new students in the On Track to Success program in Leamington.

Running for the past three years, the student achievement program now supports 72 students from grades 9 to 12. Program organizers say that students enrolled in the program have the chance to earn up to $4,000 for post-secondary education, as well as access to services including tutoring, social and recreational activities, chances to volunteer in the community, career building and mentoring opportunities, and individualized support.

The first cohort of Leamington students graduated this year, with 90 percent attending post-secondary or trade education programs. It costs $6,000 per year per student, or about $120,000 to support a full cohort of 20 students, says United Way program organizers.

“When you mix great food, fresh produce, local wine and talented chefs, the result is one amazing night,” says Danielle Moldovan, relationship manager at United Way/Centraide Windsor-Essex County. “The energy and excitement of the crowd at this year’s Battle of the Growers was electrifying. Nobody left hungry and all had a newfound appreciation for the amazing product grown right here in Essex County.”

For more program details or to get involved, contact Liam Giles-Hayes, Director of Programs at United Way | 519-259-6196

All images provided by the United Way/Centraide Windsor-Essex County.