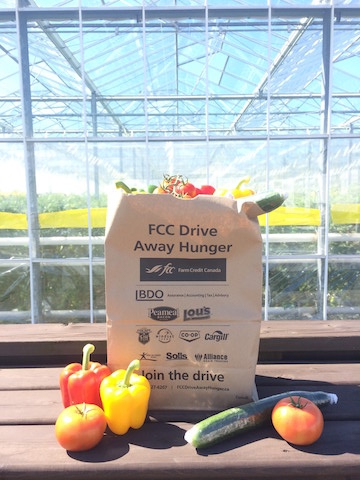 This year marks Windset’s fifth year as a national sponsor and they have already made plans to continue their support in the coming year.

In the last five years, Windset Farms has been able to donate over 300,000 pounds (136,100 kg) of fresh, nutritious vegetables to food banks in the province.

“I’m honoured and grateful to have Windset Farms as a long-time partner to FCC Drive Away Hunger,” said Michael Hoffort, FCC president and CEO. “Corporate partners like Windset Farms make a huge difference to the success of the program and to Canadian families.”

This year, Drive Away Hunger was able to collect enough food to put 5.2 million meals on the plates of hungry Canadians across the country, and Windset Farms is happy to have been part of this accomplishment.

“As a family farm, we love this opportunity to be able to give back to other families in our community,” said John Newell, COO and owner of Windset Farms.

“Drive Away Hunger has already done so much to fight hunger and we look forward to being part of their continued success.”

Headquartered at their Delta, B.C. facility and with greenhouses in Abbotsford, B.C., Santa Maria, California, and Las Vegas, Nevada, Windset Farms is a family-run business that has become one of the largest growers and marketers of greenhouse produce.

The company was a recent recipient of the World’s Best Tomato Grower award.