News
WHERE TO GROW: In a Greenhouse or a Warehouse? 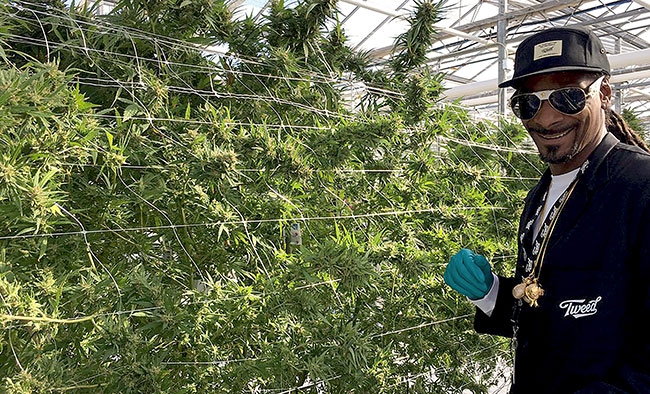 Cultural icon Snoop Dogg is one of the core partners and friends of Canopy Corporation.

Dec. 18, 2017, Smiths Falls, Ont. – Canada is leading the world in cannabis production, and one firm that’s been successful right out of the gate is Canopy Growth.

Headquartered in Smiths Falls, near Ottawa, Canopy Growth has developed the globally recognized cannabis brand ‘Tweed,’ and offers an extensive line of products in dried, oil and capsule forms. During its growth, the firm has established partnerships with other cannabis industry leaders in Canada and beyond, and now has business interests and operations spanning four continents.

Canopy Growth is unique in that it is sidestepping the industry debate over whether growing cannabis in a warehouse-type facility or in a greenhouse setting is best – in short, by doing both quite successfully on a large scale.

The firm grows cannabis in a warehouse setting in Smith Falls (known as ‘Tweed Inc.’, located in the former chocolate production facility owned by Hershey’s) and in greenhouses in Niagara-on-the-Lake (under the ‘Tweed Farms’ banner).

Was the road to cultivation in both settings simply a case of good opportunities arising to purchase and develop both types of facilities? The answer is simply about the firm’s customers.

“Essentially, we are trying to increase our supply to meet the growing demand in the market,” explains the company’s director of communications Jordan Sinclair. “It is important to diversify our growing platforms, and by including both sun-grown greenhouse production and indoor production facilities, we can provide a wide variety of strains that meet the increasingly varied needs of our customers.”

The Smiths Falls’ indoor facility was acquired in 2013 and the first products were shipped the following year. On the 40-acre site, there are 168,000 square feet of licensed cannabis production and office space, with an additional 472,000 square feet left to be converted in future.

“This facility is data-driven,” Sinclair explains, “and houses an R&D area, oil extraction infrastructure, a high-level security vault and an in-house lab on top of the many growing, flowering and drying rooms. Precise climate-controlled spaces for each stage of cannabis production, from clone to cured flower, allow for the highest quality and widest variety of product.”

Operations began at the Tweed Farms greenhouses in Niagara-on-the-Lake in 2014. Cultivation there will break a record this year, says Sinclair, for the largest legal cannabis crop ever harvested from one legal facility.

And a major expansion of Tweed Farms is in the works, increasing production by three times the present space to one million square feet, which will make it one of the largest legal cannabis-producing greenhouse operations on the planet.

The expansion involves construction of an additional 212,000 square feet of state-of-the-art greenhouses on the existing property by April 2018, plus new post-harvest facilities. Also included is a recently renovated 10,000-square-feet component for drying, along with an upgraded lab.

The expansion also includes the acquisition and renovation of an adjacent greenhouse facility purchased from a former flower grower. Sinclair says some of the many upgrades at this adjacent site “will include new irrigation systems, environmental controls, automation and shading systems, all designed to maximize yields in an environmentally friendly way.”

The total combined expansion will create over 100 full-time jobs.

Cultural icon Snoop Dogg is one of the core partners and friends of Canopy Corporation.

WAREHOUSE VS GREENHOUSE PRODUCTION
The answer to whether certain strains are grown exclusively at Smith Falls or Niagara-on-the-Lake is yes, and that decision involves production aspects as well as marketing aspects of the overall business.

“Our strains marketed as ‘sun-grown’ are all grown in our Niagara-on-the-Lake greenhouses, and we do this to ensure people looking for sun-grown products can make that choice easily,” says Sinclair.

“Some strains just seem to adapt better to the greenhouse environment and the same is true for indoors. That’s the beauty of the cannabis plant. The various strains thrive under slightly different conditions.”

In terms of advantages and disadvantages with each type of system, Sinclair begins with the obvious, which is total command over conditions in a warehouse facility versus management of a more natural climate in a greenhouse.

He says indoor growing allows them to have complete control over the environment, controlling temperature, CO2 levels and humidity to create a stable habitat to optimize growth. Indeed, at the Tweed Inc., facility in Smith Falls, Canopy Growth’s subsidiary ‘Bedrocan Canada’ employs exacting growth conditions to produce several standardized medical cannabis strains developed in the Netherlands over the last few decades. Bedrocan strains have been used in clinical research in seven European countries, and Bedrocan Canada recently launched one of the largest clinical cannabis studies in the world (the ‘EQUAL Study’) to evaluate quality of life before and after medical cannabis use.

However, greenhouse cultivation also has its merits, one being in Sinclair’s words, that “no light bulb can match the natural efficiency of the sun.”

He adds that “one of the primary advantages of sun-grown cannabis is the ability to limit our environmental footprint through the re-use of natural rainwater and sunlight. Sun-grown plants also have fewer restrictions in terms of size, and the Tweed Farms greenhouses typically have much larger ceilings than the Tweed Inc. indoor production space in Smith Falls. Greenhouse-grown cannabis also has a slightly longer flowering time.

The height of plants obviously has an impact on production levels, and in terms of comparing yield with warehouse versus greenhouse cultivation, Sinclair notes the yield on a per-plant basis can be much higher in a greenhouse “simply because you can let the plant grow to be 10 or 11 feet tall.” He adds, however, that a lot of yield variance comes from strain differences, and since different varieties are used in each facility, it’s not easy to do apples-to-apples comparisons.

Will Canopy Growth stay with both types of cultivation? Newly announced expansion plans give us the answer. The company is comfortable with both systems.

In August, the company spread into Canada’s east coast region through the acquisition of ‘Spot Therapeutics’ in Fredericton. Additionally, Canopy Growth has purchased a building for production and distribution in the city’s industrial park.

The existing building and infrastructure are in excellent condition and include almost 40,000 square feet of dedicated production space. Once licensed, this growing space is anticipated to produce over 4,000 kg of dried cannabis annually, but as the property is appropriately zoned and suited for over 100,000 square feet for growing, production may rise in the future.

Then, in early October, Canopy Growth announced another, much larger, company expansion on Canada’s other coast, this one a new greenhouse cultivation initiative in partnership with “an experienced large-scale, low-cost, hydroponic” operator in British Columbia. The newly-formed firm called ‘BC Tweed Joint Venture’ will develop a whopping 1.3 million square feet (30 acres) of greenhouse space at an undisclosed location, with the option to develop a further 1.7 million (39 acres) of existing greenhouse infrastructure at a second location.

With regulatory approval applications currently submitted, Canopy Growth is hopeful that this new B.C.-produced cannabis will be available as early as July 1, 2018.

Treena Hein is a freelance writer in Ontario, and a frequent contributor to Greenhouse Canada.