Devan Greenhouses has been an industry leader in British Columbia for almost a quarter century. 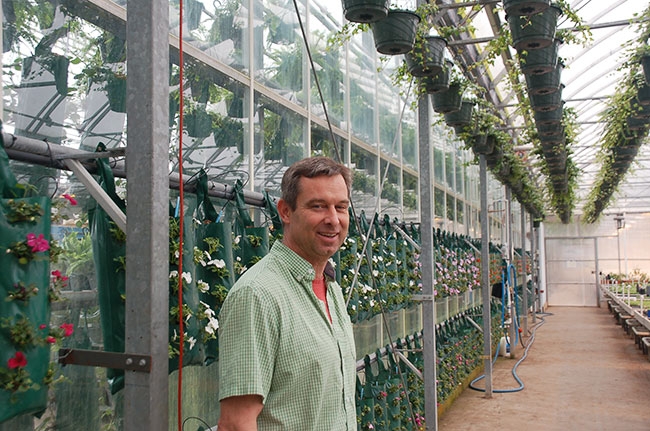 August 2017 – After two good years, 2017 is looking to be more of an average year for Devan Greenhouses in Aldergrove, British Columbia. Pieter and Anita deBruin started their nursery in Chilliwack in 1993, moving to their current location on a busy local highway in 2000.

After their last expansion two years ago, Devan now has 1.5 hectares under glass, which includes both growing areas and a retail centre. Despite its limited size, Devan is a busy place, employing about 20 people in the winter and up to 90 in the spring when it does the bulk of its business.

“Our biggest challenge is staffing,” deBruin states. “We train and work with new staff every day. The challenge is to be ready with the people when the season hits.”

With climate change, that has become more and more unpredictable.

To counter that, Devan, like many nurseries in the province, adjusted its planting schedule to produce bedding plants and other products much earlier this year.

Unfortunately, 2017 did not repeat the pattern of the previous two years. The area was hit with a steady series of unusually large snowfalls from mid-December to early February. Almost incessant rain and unseasonably cool temperatures followed through the rest of February, March and April. That is not conducive to home gardening, so plants expected to sell in March or April were still in the greenhouse, overgrowing their pots.

“A lot of us were caught by that,” deBruin says ruefully.

Devan sells about half of its production through its retail centre with the rest going to other growers and garden centres, primarily in B.C. and Washington state.

“Everything we retail, we wholesale,” deBruin says. “We used to sell to brokers but have been selling direct to growers for the past five years. We have about 500 customers throughout Western Canada.”

Although the weather severely curtailed early sales, they rebounded once the rains lifted and deBruin expects to end the spring season only about five per cent behind last year.

“You can put less flowers or smaller plants in a coloured pot to have the same effect,” deBruin notes.

He has also started using larger pots. “Consumers want the larger sizes. They would rather have their annuals in four-inch pots. They want something that looks good this weekend.”

That is just one thing he has learned from having a retail centre. “When we were only wholesale growers, we could never understand why certain things don’t sell.”

Although his customers remain predominantly 30- to 60-year-old females, deBruin is noticing more men among the young people frequenting his store. He is also noticing a shift in consumer demand.

“We are selling more fruit and vegetables. We are also selling more dwarf trees and less big trees. People also like plants that look tropical, like mandevilla and windmill palms. They will buy them again. There is also more of a blur between annuals and perennials. If it looks good and has colour, people will buy it.”

After the store closes in October, the area is converted into a stockroom for parent stock for their propagation business.

The store is situated in a conventional Venlo greenhouse with shade curtains to keep both the plants and customers cool during hot summer days but most of the rest of the greenhouse is an open-roof greenhouse.

Although it costs about 50 per cent more, deBruin says its has many advantages. In summer, the greenhouse roof completely opens up.

“We treat our growing area like a field. It is a better environment for the bedding plants.”

DeBruin uses an ebb-and-flood sub-irrigation watering system for his floor plants and boomerang sprinklers for hanging baskets which blanket the growing area. Rainwater is collected and all water is recycled after being filtered and treated with anolyte and chlorine dioxide. Heating pipes are located both in-floor and atop the plants.

DeBruin has automated as much of the planting and transplanting as possible. While it hasn’t saved much labour, he notes consistency and quality have improved dramatically.

David Schmidt is a freelance writer/photographer in British Columbia.

Related
Young and diverse: The next wave of plant consumers
Canadian greenhouse industry a true world leader
Lighting and automation among themes at CGC’17
Trends in One of the Fastest Growing Market Segments