When plants “think” alike
Biologists have discovered that a
fundamental building block in the cells of flowering plants evolved
independently, yet almost identically, on a separate branch of the evolutionary
tree.

Researchers believe that flowering
plants evolved from gymnosperms, the group that includes conifers, ginkgos and
related plants. This group split from lycophytes hundreds of millions of years
before flowering plants appeared.

The building block, called syringyl
lignin, is a critical part of the plants’ scaffolding and water-transport
systems. It apparently emerged separately in the two plant groups, much like
flight arose separately in both bats and birds.

Purdue University researcher Clint
Chapple and graduate students Jing-Ke Weng and Jake Stout, along with
post-doctoral research associate Xu Li, conducted the study with the support of
the National Science Foundation, publishing their findings in the May 20, 2008,
Proceedings of the National Academy of Sciences. 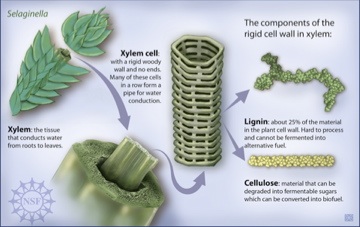 “We’re excited about this work not
only because it may provide another tool with which we can manipulate lignin
deposition in plants used for biofuel production, but because it demonstrates
that basic research on plants not used in agriculture can provide important
fundamental findings that are of practical benefit,” said Chapple.

The plant studied – Selaginella
moellendorffii, an ornamental plant sold
at nurseries as spike moss – came from Purdue colleague Jody Banks. While not a
co-author on the paper, Banks helped kick-start the study of the Selaginella genome with NSF support in 2002, and is now scientific
coordinator for the plant’s genome-sequencing effort conducted by the
Department of Energy Joint Genome Institute in Walnut Creek, California.

“Because Selaginella is a relict of an ancient vascular plant lineage, its
genome sequence will provide the plant community with a resource unlike any
other, as it will allow them to discover the genetic underpinnings of the
evolutionary innovations that allowed plants to thrive on land, including
lignin,” said Banks.

Chapple and his colleagues conducted
the recent study as part of a broader effort to understand the genetics behind
lignin specifically, as the material is an impediment to some biofuel
production methods because of its durability and tight integration into plant
structures.

“Findings from studies such as this really have implications
regarding the potential for designing plants to better make use of cellulose in
cell walls,” said Gerald Berkowitz, a program director for the Physiological
and Structural Systems Cluster at the National Science Foundation and the
program officer overseeing Chapple’s grant. “Different forms of lignin are
present in crop plant cell walls; engineering plants to express specifically
syringyl lignin could allow for easier break down of cellulose. Overcoming this
obstacle is an important next step for advancing second generation biofuel
production.”

The National Science Foundation
(NSF, www.nsf.gov) in the U.S. is an independent federal agency that supports
fundamental research and education across all fields of science and
engineering, with an annual budget of $5.92 billion.