Plants that thrive in shade, water garden plants, new and improved
plants and oak trees are some of the smorgasbord of subjects featured
in the spring issues of Canadian consumer gardening magazines. 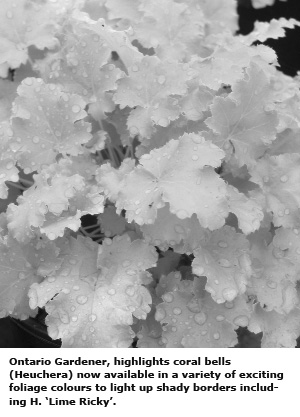 Plants that thrive in shade, water garden plants, new and improved plants and oak trees are some of the smorgasbord of subjects featured in the spring issues of Canadian consumer gardening magazines.

Shade-loving foamflowers (Tiarella) with frothy white flowers and Heucherella, often called foamy bells, a hybrid cross between Tiarella and coral bells (Heuchera) are featured in Gardening Life, March/April 2005. Both thrive in the shade, tolerate a range of soil conditions, spread to make good ground covers and will also shine in containers. Neither requires any special care. Some of the varieties cited are: x Heucherella ‘Dayglow Pink’ with brilliant pink flower stalks and finely cut leaves with a chocolate streak; Tiarella ‘Spring Symphony’ with pink-budded blooms opening to white (definitely needs a shady spot); x H. ‘Sunspot’ with gold foliage set off by red veins and bright pink flower spikes; and T. w. ‘Heronswood Mist’, a small but exquisite plant with layers of pale green foliage speckled with creamy-white marbling and pink buds that open into white flowers.

Also profiled in this issue of Canadian Gardening are oak trees typically found in native woodlands, which grow well in our northern climate. The white oak (Quercus alba) which can live for 400 years and grow up to 30 metres tall, for example, is suitable for large areas such as parks but does not thrive in city conditions. Better suited to urban locations are the bur or mossycup oak (Q. macrocarpa) which grows to 15 metres tall; the basket oak (Q. prinus) growing up to 18 metres tall; northern red oak (Q. rubra) one of the hardiest oaks, which can live for 150 years and reach 25 metres tall; and the shingle oak (Q. imbricaria), an eastern U.S. native used for roof shingles, which will grow to 20 metres tall and retains its leaves all winter.