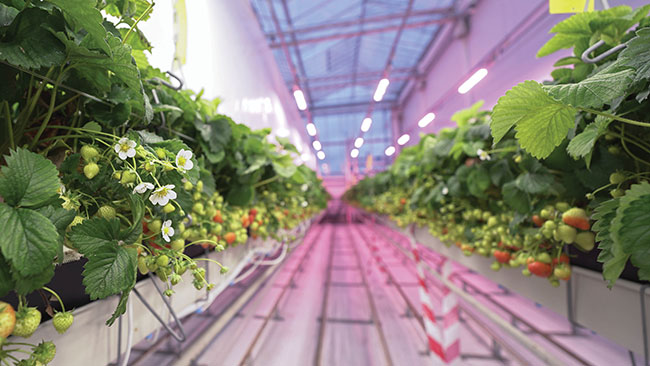 New research is broadening our collective understanding of how growers can capitalize on heightened demand with the right lighting strategy. Images courtesy of Fluence

People have been romantic about strawberries long before there was any semblance of organized production. One can trace our near-universal infatuation with them all the way back to ancient civilizations in North America, Europe and elsewhere. Over the last decade or so, however, we’ve reached new heights in both supply of and demand for fresh, juicy, good-looking strawberries.

Consumers now expect to have their pick of the finest fruits anytime, anywhere, incentivizing strawberry cultivators around the world to shift production indoors to greenhouses or vertical farms. Such a landmark shift in cultivation models comes with its own set of questions and challenges, chiefest among them how to deploy a lighting strategy that combines the right spectrum at the right intensity to maximize yields, morphology, fruit characteristics and sugar content.

Although the indoor strawberry market is still relatively young, new research is broadening our collective understanding of how growers can capitalize on heightened demand with the right lighting strategy—and dispel long-held myths about the role light intensity plays in improving strawberry production.

If cultivators can implement these insights into their greenhouse cultivation models, we will very likely see a fundamental shift in strawberry production in Canada: what I’m calling the Great Canadian Strawberry Coup of ‘22.

The state of the strawberry market
Strawberries are grown in every state in the U.S. and every province of Canada. Canada alone produces nearly 52 million pounds (about 23.5 million kg) of strawberries per year.

It’s still not enough to meet demand. Alberta, for instance, imports 97 per cent of its strawberries, while Canada is the fourth-largest strawberry importer in the world, according to Agriculture and Agri-Food Canada.

Consumers are now accustomed to strawberries year-round because a high volume of imports and cold chain deliveries enable constant availability. Constant availability, however, doesn’t necessarily translate to consistent quality, often meaning that cultivators leave revenue and market share on the table. As a result, many are moving production into greenhouses and deploying supplemental light to achieve greater year-round consistency and quality that can finally usurp the country’s reliance on imports.

But the value propositions supplemental light present to greenhouse growers extend well beyond consistent production. They also now have an opportunity to improve and optimize yields by implementing the right light spectrum at the right light intensity, inputs that we are only just now beginning to fully understand within the context of strawberry production.

The evolution of lighting technology for strawberry cultivation
Full-scale indoor strawberry cultivation is still in the early adoption phase. However, the ability to control and improve crop outcomes hints at an opportunity to deliver high-quality fruit consistently via multiple harvests or flushes. Realizing that potential, however, is contingent on optimizing how much light at specific wavelengths is delivered to the crop.

In field production, June-bearing strawberries produce one large harvest in the spring and into the summer months. Indoor strawberry cultivation, however, can yield multiple large harvests per year to compound revenue capture and create a more consistent cultivation model.

This is notable and advantageous because it enables growers to use technology that finely tunes the light spectrum and its intensity to not only capitalize on a wider range of annual harvests, but also to influence the characteristics of the fruit. Recent research further substantiates this additional capability.

In 2020, Fluence conducted research at the Delphy Improvement Centre in the Netherlands, in collaboration with Wageningen University, to closely examine lighting’s impact on the performance of two June-bearing strawberry cultivars, Sonata and Sonsation.

The study found that both cultivars grown under a broad spectrum with a fraction of far-red light saw taller crops, wider canopies, higher overall yields and increased Brix values.

The notion among many strawberry researchers has been that increasing light intensity has little impact on overall yields. 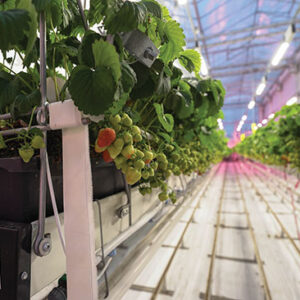 To explore this hypothesis, Fluence initiated a second study with Delphy that increased photosynthetic photon flux density (PPFD) from the standard 200 μmols/m2/s to 300 μmols/m2/s for the same two June-bearing cultivars.

Key findings
Sonata and Sonsation cultivars saw 68-per-cent and 40-per-cent taller crops as well as 28-per-cent and 29-per-cent wider canopies, respectively, under a white spectrum with a fraction of far-red in relation to a pink spectrum.

Researchers also recorded significant increases in yields—with and without fruit waste which can be processed into jams, jellies and preserves to extend commercial value—of both cultivars under a white spectrum with a fraction of far-red. Compared to the pink-only treatment, Sonata saw a yield increase of 13 per cent under white light with far-red, excluding waste and an 11-per-cent increase with waste included. Similarly, Sonsation yields increased by 18 per cent without waste and 14 per cent with waste.

Optimizing light intensity
The long-held notion among many strawberry researchers has been that increasing light intensity has little impact on overall yields. To explore this hypothesis, Fluence initiated a second study with Delphy that increased photosynthetic photon flux density (PPFD) from the standard 200 μmols/m2/s to 300 μmols/m2/s for the same two June-bearing cultivars.

Researchers found that the 50-per-cent increase in supplemental light drove up to 31-per-cent increases in yields of “Class I” berries. Yield increases were greater during the winter months, when the difference between actual and optimal daily light integrals are more pronounced.

The finding represents a significant step forward for greenhouse cultivators, especially those with facilities in more extreme climates and geographies like Canada. It not only highlights the gap in existing versus potential production, but offers a clear roadmap for cultivators to begin exploring lighting strategies that combine a balanced spectrum that includes a fraction of far-red light with higher light intensities to improve top-line crop performance.

Just as importantly, it shows that higher yields and better quality are not mutually exclusive. Growers can improve the factors that make strawberries highly marketable—aroma, taste, juiciness and uniformity—and produce more of them at the same time, creating new pathways to profitability that consistently meet demand with the best quality.