Features Crop Protection Vegetables
What is this bug in my tomato crop?

Once inside the greenhouse, the tomato bug leaves feeding rings on stems, which lead to other potentially devastating consequences for the crop. 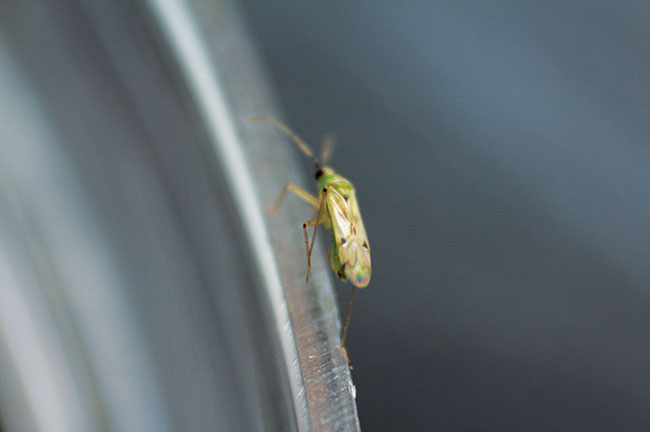 Adults are straw-coloured or yellow-green with small dark spots on the wings, legs, and antennae. All images by GrowLiv Ltd.

Earlier this year, we received a call from one of our customers: despite being a long-time greenhouse tomato grower, they had encountered an insect they had never seen before. And, worse yet, it was terrorizing their plants.

After sending in our IPM specialist to check out the problem, they observed that these tiny insects were exceptionally active and most present at the top of the plant canopy. The next step was to take a few samples back to the lab for a closer look.

Just under 4 mm long as adults, these bugs are very small. Nymphs can be easily confused with adult aphids to the untrained eye. The long, slender bodies of adults are straw-coloured or yellow-green, and a look under the microscope will reveal semi-translucent wing tips (similar to any hemipteran species), as well as small dark spots on the wings, legs, and antennae. The closer inspection helped us identify the insect as one we had seen a few years ago with a different tomato grower: the tomato bug, Engytatus modestus. 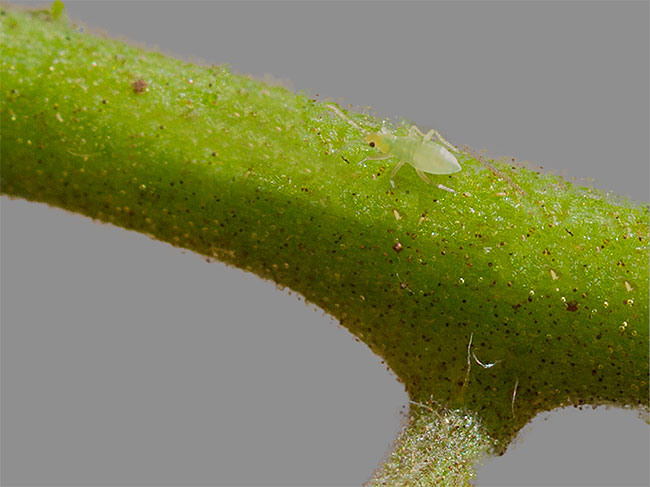 To the unfamiliar eye, tomato bug nymphs can be easily confused with adult aphids.

Despite being a potentially devastating pest to crops including tomato, tobacco, squash, eggplant, and beans, most Canadian growers are not familiar with the tomato bug. First reported in Hawaii, this insect thrives in hot, dry regions, and so is more common in the southern United States than in Canada. It also became less common in many areas of North America after the relentless use of DDT to combat tomato bug infestations in the 1940s and 1950s. However, we still see infestations periodically during warmer summers.

The damage this grower had seen on their plants further confirmed our identification.

The tomato bug has a very specific pattern of damage. The severity of the infestation meant that a lot of damage was being done. Tomato bugs feed on plants by inserting their piercing-sucking mouthparts into the vascular layer of the stem, which damages the plant and results in a dark-coloured feeding ring around the stem or petiole. This section becomes weakened considerably and will snap easily if the stem is bent. If this section of the plant survives, it will later become thickened and resistant to breakage as the damage heals. 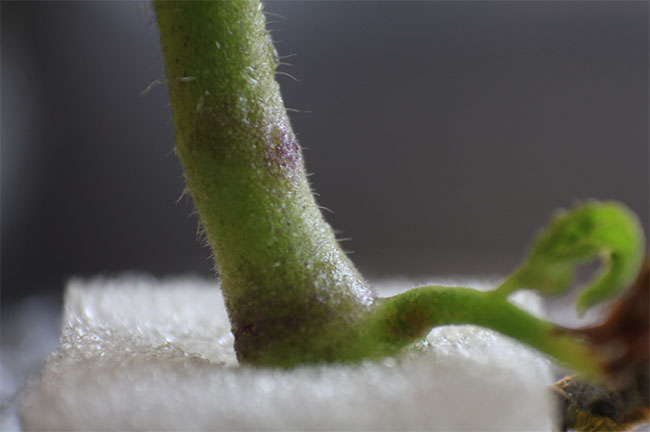 This unique ring-patterned damage is caused by a combination of the bug’s salivary secretions and their habit of feeding in the same location many times over.

This unique damage pattern is caused by a combination of the toxic salivary secretions of the insects and their habit of feeding in the same location many times. This causes a characteristic ring pattern on the affected plant tissue. It is suspected that the insects are drawn back to the same feeding sites because the plant tissue around the feeding rings increase in protein and dextrin content as the plant’s regenerative systems are activated, providing the insects with valuable nutrients.

While it is possible to minimize the snapping of branches caused by feeding ring damage, the effects of this injury could lead to many other indirect consequences that could be just as devastating. These include slowed flower production, fewer and smaller flowers, increased flower shedding, bushy plants, increased number of abnormal fruits, and lower yields. These indirect effects may be avoided if damage occurs when the plants are young enough, however.

In tobacco, specifically, tomato bugs feed on the leaves and stems of young plants, which sustain little to no permanent damage. As the plant matures, however, they switch to feeding on flower and seed stalks, which results in significant, lasting damage.

Overall, the tomato bug has a high potential for damage, so prevention plays a key role in mitigating the problem.

Bugs can come in with imported fruits and vegetables, harboured by part of the attached stem. It can also enter the greenhouse on plant seedlings or plants from other countries such as Mexico and the U.S. where Engytatus is a problem. Usually, it survives on tomato, eggplant, and other crops in the open field, entering the greenhouse around mid-season.

Once inside, they cause a lot of indirect damage to plant stems and leaves, moving quickly and spreading easily.

They may go undetected or underdetected at first due to their nymphs’ similarity in appearance to aphids and other Mirid bugs. Regular scouting of the upper crop canopy and checking of sticky cards can help identify any adults that make their way into the greenhouse, putting a stop to the problem before it can spread.

Because this insect likes to feed on the top parts of growing shoots, scouting of these areas and use of sticky cards at the top of the plant canopy can help to spot it before it becomes a problem. Seedlings should be checked thoroughly if coming from other countries or areas. If it can be controlled on seedlings, the crop can be protected from damage.

There are no known commercialized natural enemies available to manage it. Selective insecticides that are safer for biocontrol programs can be used. Pathogenic fungi could also be a good alternative to chemicals for managing this pest. Note that neem oil is not registered for use in Canada.

Abida Nasreen, PhD, is director of research and development at GrowLiv Ltd., based in Ontario.