The terms “boiler shock” and “thermal shock” describe a type of heat-stress in greenhouse boilers that can lead to damage and serious structural failure of the boiler vessel. 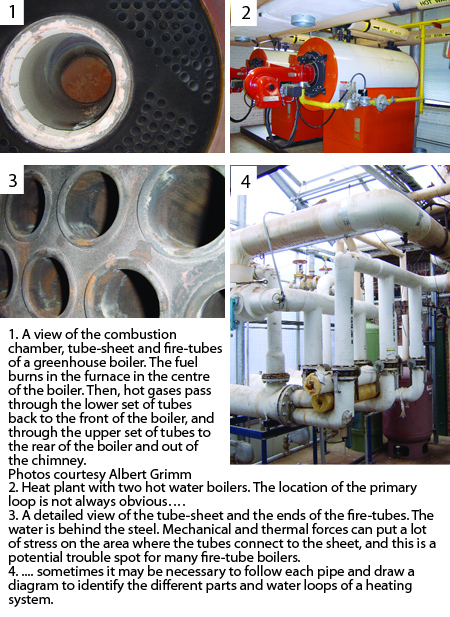 The terms “boiler shock” and “thermal shock” describe a type of heat-stress in greenhouse boilers that can lead to damage and serious structural failure of the boiler vessel. Boiler shock, in essence, is caused when cold water is pumped back into a hot boiler. You may be facing problems with boiler shock when you are trying to get more hot water from a heat plant than what it was built to deliver.

If you have ever made preserves, such as jams or pickles, you may have seen the effect of thermal shock in your own kitchen. Before you can fill homemade jam into glass jars, they need to be heated to the same temperature as the boiling jam. If you try to fill hot jam into a cold jar, the glass will very likely crack into hundreds of shards. Likewise, if you heat up your jars too much, and you let your jam cool down too much before filling, you’ll end up with the same mess of spilled jam and shredded glass on your kitchen counter.

Something similar can happen to your boiler, when the heat plant is running at capacity, and when the steel vessel and tubes are very hot. Usually, the greenhouse calls for a lot of heat whenever the boilers are running at full capacity, so the return water from the greenhouse arrives relatively cool at the boiler. If you allow this cold water to be pumped back into the boiler without controls, it would rapidly cool the steel around the inlet pipe, while the rest of the boiler remains hot.

Why does this damage the boiler? When steel heats up, it expands. When it cools down, it contracts. Boilers are engineered in such a way that this thermal expansion and contraction occurs uniformly over all parts of the boiler, so that everything fits perfectly together, whether the boiler is hot or cold.

However, when cold water is pumped into a very hot boiler, those parts immediately surrounding the inlet port will contract, while other parts stay expanded from the heat. This thermal gradient creates extreme mechanical stress on the vessel and on the steel tubes of the boilers, and it can rip the tubes from their seats or even crack the boiler vessel itself.

Some (older) shunts are simply open loops equipped with a circulation pump, which is controlled by a thermostat in the return pipe. When the return water drops below the temperature set in the stat, the pump is switched on and hot water is mixed with the cold return from the greenhouse.

In most cases, however, the boilers are equipped with one or more primary loops, and with various means of controlling the return temperature at the inlet port, by diverting hot water from the main header pipe back to the main return pipe. The diagram in Figure 1 shows an example of what this may look like.

Many climate computers are equipped with further circuitry and programs designed to prevent thermal stress in greenhouse boilers.

This can be very problematic, if the boilers are too small for the heat demand called for by the greenhouse, because dropping air temperatures mean higher heat-demand on very cold days, while at the same time the computer limits the available hot water from the heat plant, in order to protect the boilers.

Albert Grimm is the head grower at Jeffery’s Greenhouses in St. Catharines, Ontario.