Primary criteria for many growers considering new introductions is: “Would I buy it?”  Paul Ecke Ranch’s Prestige line is still the standard by which all other poinsettias are judged. 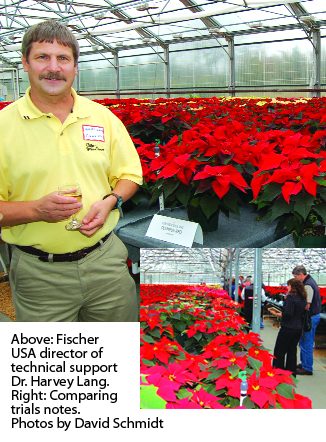 Paul Ecke Ranch’s Prestige line is still the standard by which all other poinsettias are judged.

Prestige was among over 90 poinsettia varieties from Dummen, Fischer, Florema Young Plants, Paul Ecke, and Selecta First Class on display at Westcan. Although attendance at the open house remained steady, the number of varieties was down slightly from 2006.

“Last year we had just over 100 varieties,” Westcan owner Eric Voogt said, noting that like everyone else in floriculture, breeding companies are cutting costs in a tight-margin market. He added that some new numbered varieties “didn’t do well,” so breeders opted not to show them as they will not be included in future offerings. “This is also a test of new varieties and some don’t pass the test.”

Lang said Fischer’s most popular variety is the Orion line, which has now been supplemented with the Early Orion line, four days earlier and cold-growing. He pointed out the importance of having trials in different growing regions, using Fischer’s ‘Cortez Burgundy’ and ‘Red Dragon’ as examples.

“Cortez is our worst poinsettia for heat tolerance, but it’s a good grower with good colour under the cooler weather up here,” he said. Similarly, he noted, “we don’t sell a lot of Red Dragon, but it does well up here.”

Ultimately, the varieties growers choose depend on their personal preferences.

“Would I buy it?” That’s what a Washington State grower and former poinsettia breeder said, adding that the answer drives the selection process for both breeders and growers. He and several other growers said they look for varieties with oak-like leaves “because they look more festive.” They also prefer plants with a V-shape, as they tend to be sturdier.

“A V-shape results in less breakage. The question I ask is, will I be able to ship my whole crop?” one grower said, stressing “it’s the last plants where the profit is.”

In some cases, the grower has no choice as to which varieties they will grow. For example, this year’s open house attendees included a buyer for a big box retailer. “He will look over the available varieties, select the ones he likes, and those are the ones he will order for his growers next year,” Voogt noted. n

David Schmidt is a freelance writer and photographer in British Columbia.