New products and production processes are always a highlight of the annual CanWest Hort Show floriculture bus tour, and the most recent edition was no exception. 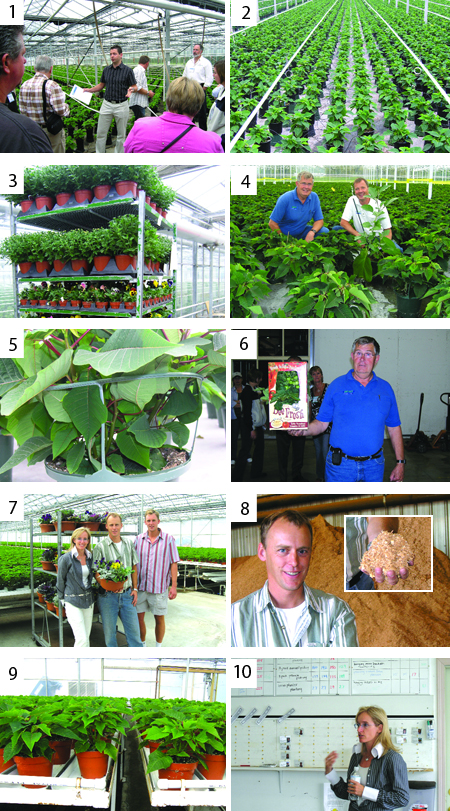 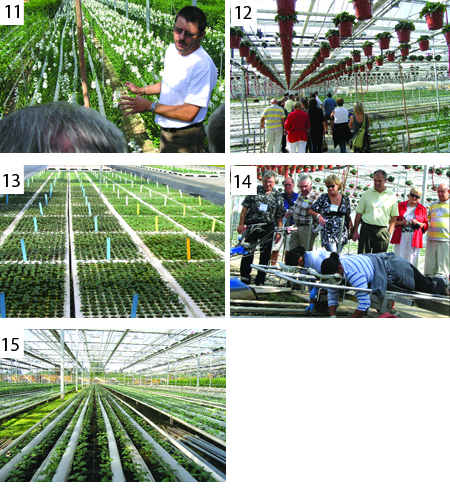 New products and production processes are always a highlight of the annual CanWest Hort Show floriculture bus tour, and the most recent edition was no exception. The focus was on four growing operations in and around Langley, British Columbia.

DEVRY GREENHOUSES
n The day began near Langley at the 13-acre satellite facility of DeVry Greenhouses Ltd. The home farm is in Chilliwack. (DeVry has three operations, with two in Chilliwack and one in Langley). The company has 27 acres of total growing area at the three locations, and is currently expanding into Alberta. The major markets are in B.C. and Alberta, with some exports to Washington state.

The company is owned and managed by Pete and Arnold deVry, and their parents Arie and Bep. Hosting the delegates was sales specialist Jack Rozendaal (1).

DeVry offers a complete product line of bedding plants, from 606s, to 4" and 6" pots, and up to 15" containers and hanging baskets. “We try to offer one-stop shopping for our customers.”

The Langley facilities were brimming with poinsettias (2) at the time of our visit. The plants are placed atop inverted pots to keep them off

the ground, thereby ensuring a better airflow throughout the crop, a great boost to developing healthy roots.
The company is continually improving its operations by embracing new technologies in information technologies, transportation and shipping. “We pride ourselves on quality, service and reliability,” Rozendaal noted, “and therefore we deliver all of our products with our own trucks.”

They rely on natural gas because it’s convenient and easy to use. They don’t have a lot of heat demand outside of the coldest winter months.

With the poinsettias, they sell more coloured varieties at the start of the season, “but by the end, it is just about all red,” said Rozendaal. They’ve even dabbled with some painted poinsettias over the past two years, as younger customers use them to match room colours.

A cart (3) displayed some of the other fall crops available through the company. Geraniums are the primary spring crop, along with mums, impatiens, begonias, mixed planters and hanging baskets.

BEVO FARMS LTD.
n Poinsettias were again in the spotlight with the next stop of the tour. However, Bevo Farms is better known across North America as a leading supplier of propagated plants, growing and distributing vegetable, flower, berry and other seedlings. The company was incorporated in 1986 and began with 2.5 acres. It has steadily grown to its current 34 acres of production facilities in Langley.

Welcoming the delegates were company president and CEO Jack Benne and vice-president and general manager Leo Benne (4). Bevo uses eggplants as banker and indicator plants for its poinsettia biocontrol program. At the time of our visit (mid-September), no pesticides had yet been required. “This year we are attempting to grow the crop completely biologically,” Leo explained.

Among predators keeping pests at bay were encarsia and swirskii. “They’re expensive,” said Leo, “but spraying is expensive, too. And we can apply biologicals during regular business hours.” They began the crop with a “heavy preventive” introduction, and then scouted the crop weekly. “Based on what we find on the trap cards,” he explained, “we can either increase the release rates or maintain the base rate of application.”

Biological control is old hat to the Bennes. They’ve used them with their greenhouse propagation crops for about 13 to 14 years.

They used plastic support rings (5) with their poinsettias to assist with shipping.

The company installed a reservoir a few years ago to collect rainwater to augment its regular supplies. “The rainwater quality is excellent,” said Leo.

Bevo has 70 full-time employees, with staffing rising to about 240 in the peak spring season.

The company is looking at a new line of table tomatoes (6) Bee Fresh houseplants will yield 40 to 50 cherry tomatoes and remain compact at about 40 centimetres in height. The plants are grown from seed.

The company is also looking at a mini-cucumber variety for the same purpose.

DARVONDA NURSERIES
n Next on the tour was Darvonda Nurseries, a major wholesale potted plant producer. The company, which began in 1980 with 20,000 square feet, has since grown to 10 acres of indoor growing space and 15 acres of field production.

The management team includes husband and wife Byron and Tamara Jansen as president and vice-president, respectively, and Byron’s brother Randell (at right) as the grower (7).

The main crops are spring annuals, fall garden mums and poinsettias. The company is well known for its quality plant material and value-added efforts on packaging and containers. “We want to ensure customers have an excellent experience every time they deal with us,” said Tamara.

The company also works hard to ensure they have unique products in their catalogue. That involves travelling around the world to source new items. “We’re always looking for something we don’t see at home,” she explained.

The Darvonda philosophy is to sell an experience, not just a plant. Gardening should be entertaining. “We want consumers to have a lot of fun in the garden.”

Featured during the tour was the company’s wood chip boiler system. It incorporates the latest emissions control technologies and has helped the company reduce heating costs by about 75 per cent. Installed several years ago, the boiler quickly paid for itself. The system burns sawdust (8).

One of their newest greenhouses features an Echo hanging basket system and flood floors. However, the facilities also showcase a great deal of family innovation and design, including a number of benches (9) in an older range. “To keep our costs down, we did a lot of the work ourselves,” explained Tamara of the company’s early years and expansions. “We tried to save money wherever we could.”

A production task board (10) lets employees know the goals, productivity highs, averages, and results from the previous day. It has helped the company better cost out various tasks.

To assist with shipping, laneways between greenhouses and the fields have all been paved.

At the time of our visit, work was well underway on a new 100,000-square-foot warehouse and distribution centre, a major upgrade from Darvonda’s current facilities of about 5,000 square feet.

RAVENEK GREENHOUSES
n The final stop of the day was Ravenek Greenhouses, long regarded as one of the premier cut flower producers in the province. Welcoming delegates was John Ravenek (11), who provided a brief history of the operation.
His dad, George, immigrated to Canada from the Netherlands at age 18. Within five years, George was growing in rented facilities in nearby Surrey. In the mid-1970s, he built a greenhouse in Langley and began growing cut flowers. He is believed to have been the first alstromeria and gerbera grower in the province, and one of the first to grow freesia. “He would return to Holland every year and bring back new varieties and ideas.”

This was the business John grew up with, and he soon shared his father’s passion for plants. “I grew up with
cut flowers.”

Following his formal schooling, John worked with a cut flower grower in the Netherlands for a year. By the time he returned home, his dad had begun moving more into propagation and was doing less with cuts.

John maintained his focus on cut flowers and built a greenhouse in 1997 on the current site with his dad, who is now semi-retired from the business.

The main crops are snapdragons and stocks, with some potted cyclamen (12) grown above the cut flower crops to maximize space. “The cyclamen crop is a free ride,” enthused John. “All the input costs are already there.”
The cyclamen pots are on gutters placed over the beds and main walkway. Spaghetti irrigation is used and the gutters collect the water. The gutters can be moved up over the lights.

The tour began with the propagation house (13), which features a colour-coded system. They seed every week. “We grow snaps year-round and we’re always trialling new varieties.” He works closely with Pan American Seed on these evaluations.

Scheduling is very important, especially to ensure they have the right colours available for the seasons. Yellows are popular in the fall, for example, as are reds and whites for Christmas.

A motorized planting machine (14) makes starting a new crop much easier and efficient.

The company is continuing its work with CanAm Installations Ltd. on an integrated air circulation system. It has  the potential for considerable energy savings and environment enhancement. Featured are large intake vents that draw air from the greenhouse for dehumidification. The drier air is returned into the greenhouse via air tubes (15) placed within the crop. The system optimizes relative humidity, CO2 levels and temperatures. Heat drawn off in the dehumidification process can be returned to the greenhouse if required, or vented to the outside.

The system also helps cool the greenhouse, something key with crops such as snapdragons. It also helps keep the crops drier, thereby reducing disease potential.

“We’ll be looking at the numbers,” said John. “We’re too small for a sawdust boiler, and humidity control is a big issue.” n