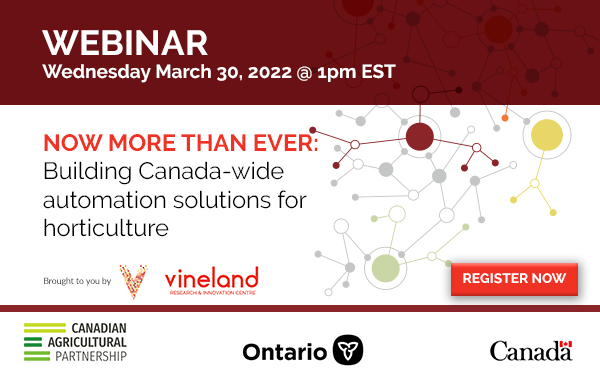 Food security, labour shortages and the fragility of global supply chains have become leading challenges for many sectors of the national economy, including horticulture. The need and opportunity for automation is now, more than ever.

Vineland Research and Innovation Centre is proud to present this virtual automation showcase bringing together a diverse line-up of speakers with practical insights into the opportunities, challenges and markets for horticulture automation innovation. Free registration.

Panel One – Seizing opportunity: Growing the marketplace for horticulture automation

The demand for safe, effective and efficient national and international global food supply chains underlines the critical need for domestic food security; at the same time, the agri-food sector is facing large labour availability and skill gaps. The solution lies with automation innovation.

Robotics and automation have progressed to the point where high-tech on-farm solutions are efficient, effective and increasingly economical, but more opportunities remain, particularly for plant handling, crop management applications and different business models. This panel will explore the need and opportunity for horticulture automation innovation and how new technologies are being adapted and adopted in the sector.

Panel Two – From ideas to outcomes

This session will discuss pathways to programmatic support mechanisms, commercialization opportunities for Canadian economic growth and how to overcome the challenges of taking much-needed innovation into the real world. 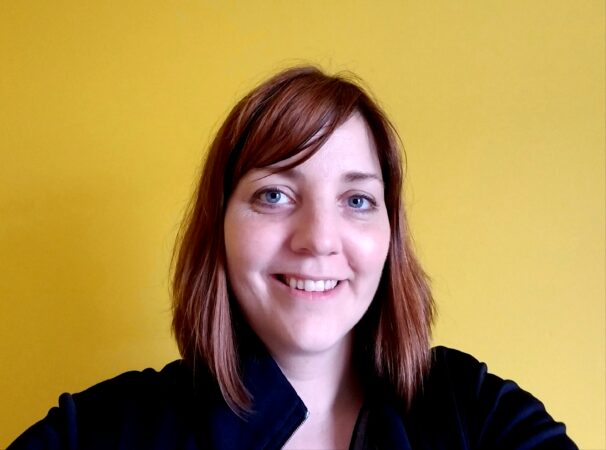 Niki has been with OGVG since 2014 and oversees research projects on behalf of over 200 member-greenhouses who grow cucumbers, peppers and tomatoes in Ontario. Niki is also active in seeking out crop protection solutions, promoting plant health, advocating for increased research funding and involved in many provincial and national initiatives. The Ontario greenhouse vegetable sector represents approximately 3000 acres and an annual farm gate value of more than $1 billion. 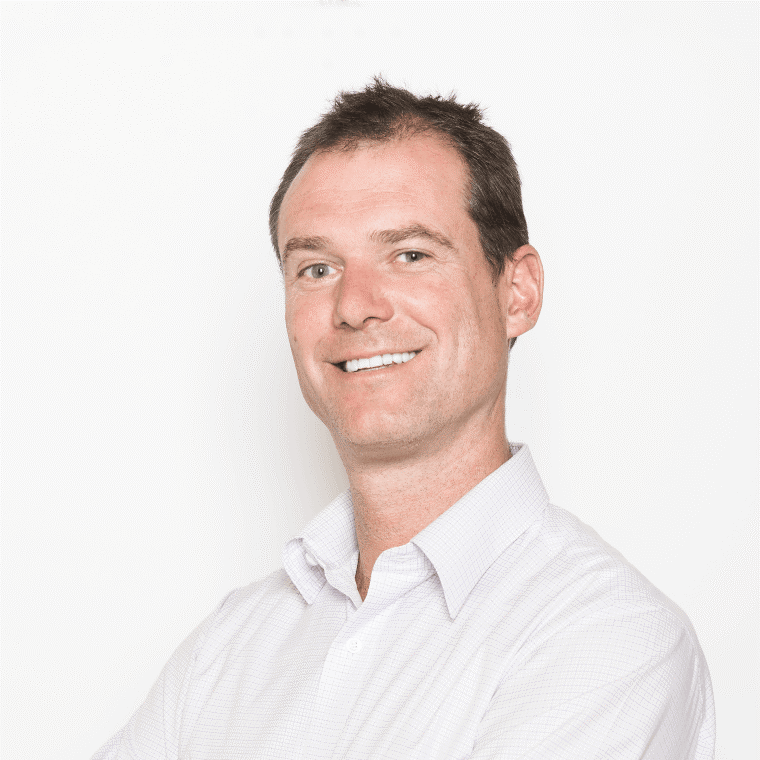 Michael joined Mycionics as Chief Executive Officer in 2019 to lead the commercialization of the world’s first robotic mushroom harvesting system. His primary responsibilities involve strategic planning and overall corporate leadership. He brings over 15 years of experience investing in sustainable agriculture and healthy food companies in North America with InvestEco capital, acting as an investor, portfolio board director, strategic partner and operator. Prior to Mycionics, Michael invested in an automated greenhouse company producing micro and leafy greens, selling to all major retailers across Canada. He also formerly spent 6 years on the board of the Stop Community Food Centre and as trustee for Trees Ontario. Michael was raised on a farm in southern Ontario and studied geography at McGill University while spending summers in Northern Canada planting trees and supervising reforestation projects. He is passionate about nature and loves spending time exploring the great outdoors with his wife and three children. 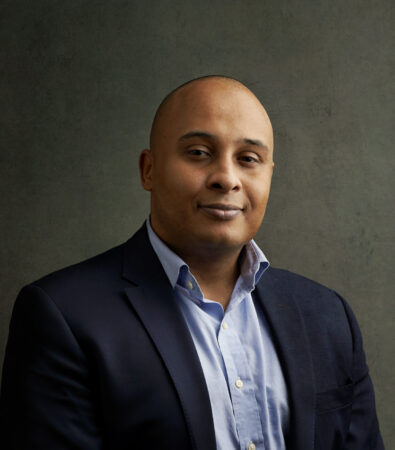 Hussam worked for several years in the telecommunications industry, advancing to the level of senior design engineer with a large Canadian telecom company where he managed multimillion dollar projects. He returned to graduate school where he patented and commercialized a new technology with the creation of his start-up company. As CEO he secured more than $3 million in seed investment and grew the company to multiple millions in annual revenue and 30 employees.

Hussam is an Electrical Engineer by training and holds a Masters of Engineering, Entrepreneurship and Innovation degree from McMaster University. 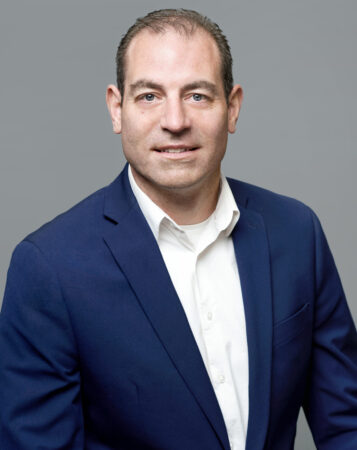 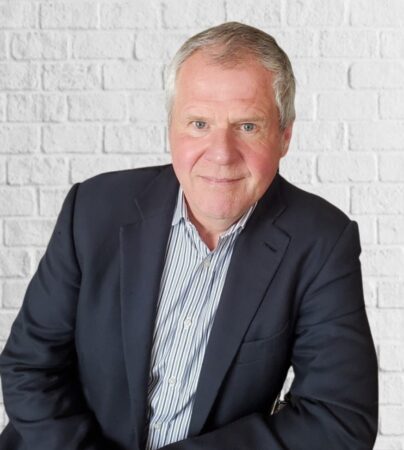 Jayson Myers is the Chief Executive Officer of Next Generation Manufacturing Canada. NGen is the organization that leads Canada’s Advanced Manufacturing Supercluster, an initiative funded by the Government of Canada that will leverage more than $600 million in collaborative, industry-led projects aimed at building world-leading advanced manufacturing capabilities in Canada. Jay is an award-winning business economist who specializes in industrial and technological change. Between 2007 and 2016, he served as President & CEO of Canadian Manufacturers & Exporters, Canada’s largest industry and trade association. He is an advisor to both private and public sector leaders, and has counselled Canadian prime ministers and premiers, as well as senior corporate executives and policymakers around the world. He is a member of the Advisory Board of the World Manufacturing Forum and a leading advocate on the world stage on behalf of advanced manufacturing in Canada. Jay has held a research fellowship at Nuffield College, Oxford and lectureships in political economy at Oxford and the University of Warwick. He completed his academic studies at Queen’s University, UBC, the London School of Economics, and Oxford University. 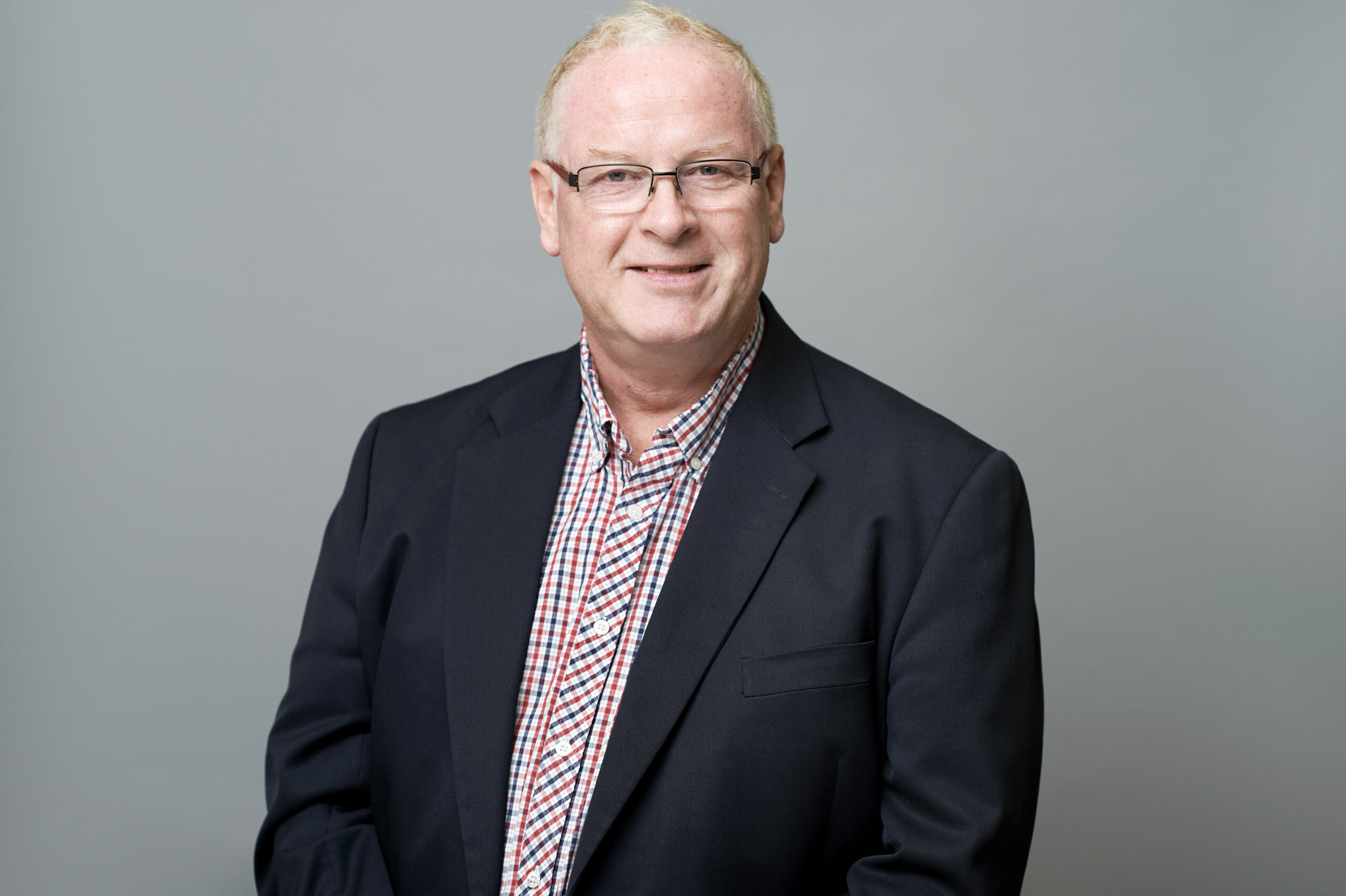 Ian Potter is President & Chief Executive Officer of Vineland, as well as President and Chief Executive Officer of Platform Genetics, Inc. Previous to Vineland, Ian served as Vice President, Engineering and Vice President, Business Management with the National Research Council of Canada (NRC) and previous to NRC as the Chief Operating Officer at Alberta Innovates – Technology Futures (AITF). During his 10 years at AITF and its predecessor, the Alberta Research Council (ARC), he held several leadership and management positions in energy, environment, greenhouse gas technology and human resources. Ian has a successful track record in innovation and strong experience developing and collaborating with a broad network of stakeholders. He holds a PhD in Mechanical Engineering from the University of Calgary. 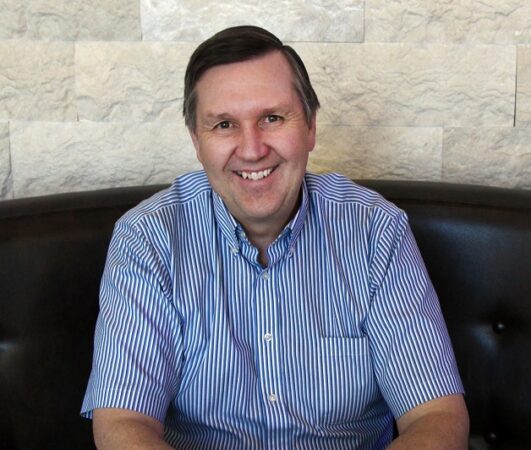 Ray Price is President of the Sunterra Group of Companies including Sunterra Meats, Sunterra Markets and Sunterra Farms based in Alberta and the Midwest U.S. Ray is Director of the Board for the Canadian Meat Council and has also served on the Board of the Government of Canada’s Council of Science and Technology Advisors. 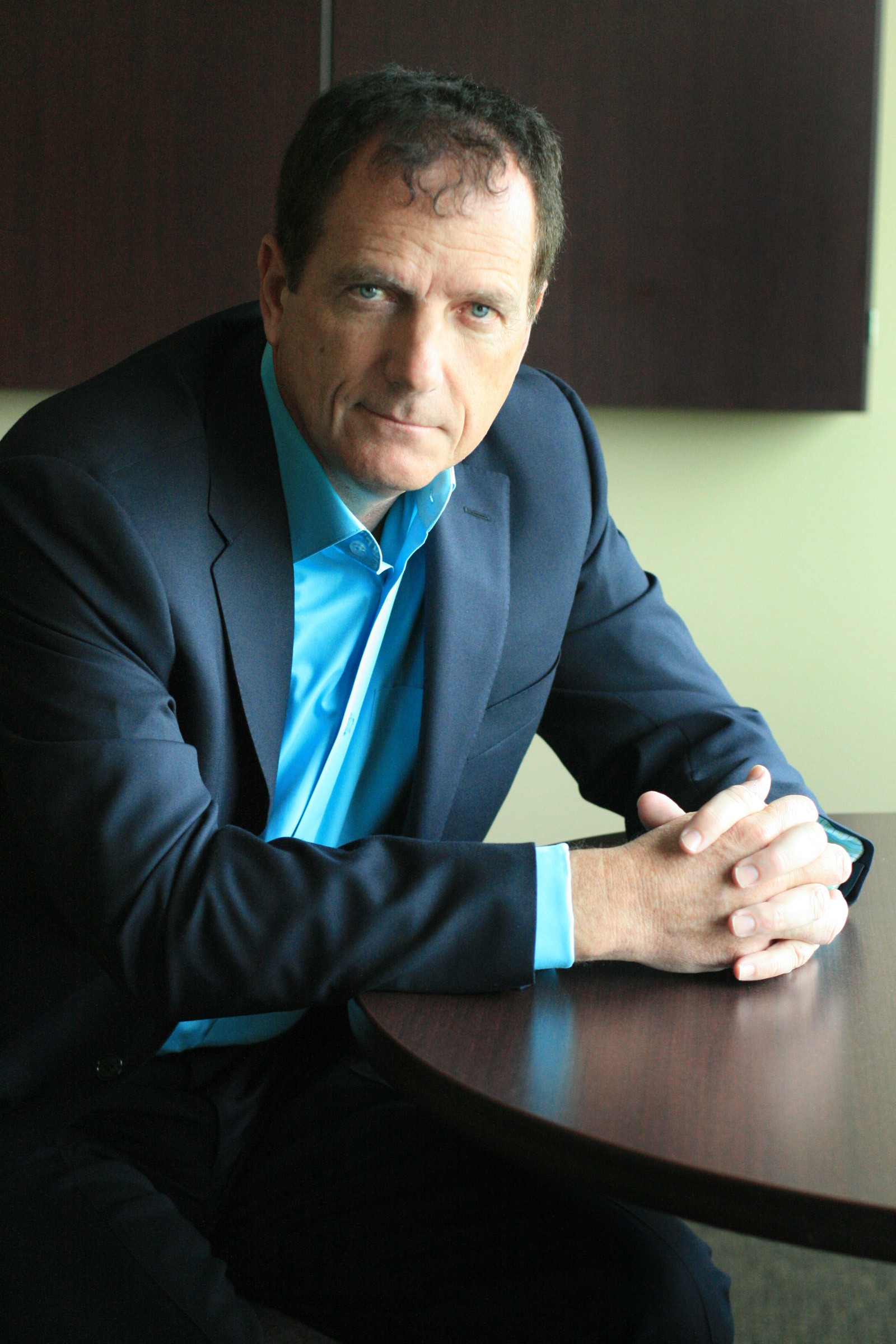 Under his guidance, Bioenterprise is navigating the shifting Canadian landscape of food, agriculture, and clean technologies delivering deep impact through high-growth scaling projects.

Dave’s corporate background includes Apple Computer Inc., Texas Instruments, angel investment and his own entrepreneurial pursuits. Dave believes in the potential of agri-tech to adopt emerging technologies and that the Canadian ecosystem can work together towards global leadership. 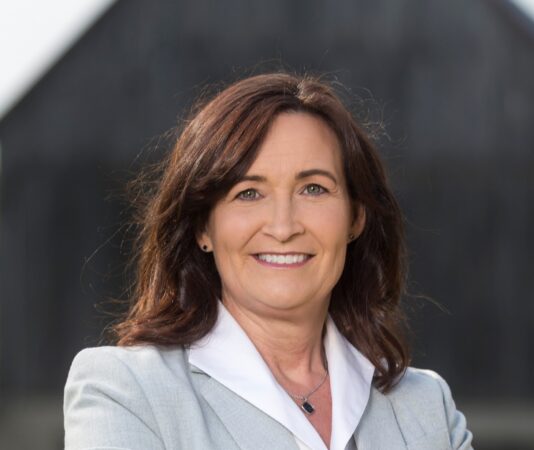 Raised in a small rural Southwestern Ontario agricultural community, Kerry is a long way from where she thought her career would lead. The combination of her grassroots upbringing and a food science specialisation from the University of Guelph led her to the Beef Information Centre, where she spent 10 years as the National Product Development Manager. This set the stage for her next opportunity with the Mallot Creek Group, a growing, Elora, Ontario-based agri-food consultancy she would call home for almost 17 years, rising to the level of vice-president. In 2020, she became Champion Petfoods’ Vice-President of Technical Product Development and Innovation, a job that led to her current role as CEO of CAAIN, where she oversees and supports ag-tech innovation projects. Kerry and her athletic therapist husband, Dave, are the proud parents of two grown children and an excellent running companion, Molly, their sassy Australian Shepherd.

Canada is in a great position to lead agricultural automation innovation by growing its horticulture equipment sector and has built a strong national network focused on developing Canadian expertise and solutions. This includes the Canadian Agricultural Automation Cluster, supported by Agriculture and Agri-Food Canada and hosted at Vineland Research and Innovation Centre (Vineland), as well as the Canadian Agri-Food Automation and Intelligence Network (CAAIN).1