A closer look at the impacts of minimum wage hikes on the greenhouse industry in Ontario, British Columbia and beyond. 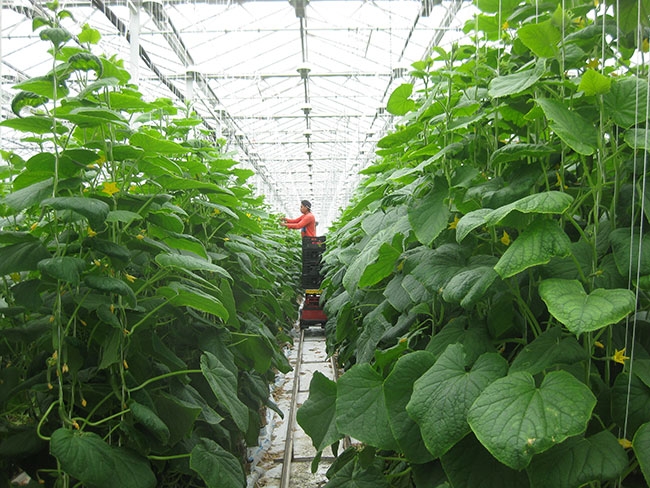 The minimum wage in British Columbia will rise to $12.65 per hour in June, with yearly increases culminating in a rate of $15.20 per hour in 2021. Ontario’s proposed raise to $15 per hour is scheduled for 2019. Photo credit: BC Greenhouse Growers’ Association

Everyone in Canada’s business community remembers the mid-2017 announcement from Ontario Premier Kathleen Wynne about minimum wage. Her plans to quickly and significantly raise minimum wage raised eyebrows across the country. As promised, at the start of 2018, she raised the rate by $2.60 per hour (from $11.40 to $14) and a further increase to $15 is planned for 2019.

Other provinces are also boosting their minimum wage. Alberta businesses will be required starting this coming October to pay $15 per hour, $1.40 over the current $13.60, which was the result of last September’s increase. In BC, minimum wage will rise to $12.65 in June, with yearly increases culminating in a rate of $15.20 in 2021. In comparison, minimum wage will still range from only $11 to $12 by the end of 2018 in the rest of the provinces and territories, with the exception of Northwest Territories and Nunavut (see sidebar for more).

There have been several reports by prominent Canadian institutions condemning the increases this year. The Bank of Canada, for example, stated in January that the increases in various provinces might cost 60,000 jobs by 2019 and also result in higher prices for many products. The Canadian Centre for Economic Analysis states that Ontario’s minimum wage hikes are the largest in 45 years, and that employers are now having to adjust to some of 64 direct and indirect costs related to labour. The preliminary results of a mid-2017 survey by the Canadian Federation of Independent Businesses found that the hike to $15 in Ontario by 2019 will cause 34 per cent of Ontario’s small- and medium-sized business owners to consider selling, closing or moving their firms out of the province. However, other business experts say the overall impact of minimum wage increases on the economy will be minimal and that many economists critical of the hikes are avoiding analysis of the benefits they can provide – more available spending money and the related stimulation to the economy

Concerns from ornamental, vegetable and retail sectors
The concerns expressed by Canada’s greenhouse industry are similar to those of other industries. One of them is the lack of research and incorporation of feedback by provincial governments. As far as Ken Linington, human resources director of Flowers Canada Growers is aware, zero economic impact research was done before the recent major hike in Ontario. Karl Stensson, CEO and president of the Sheridan Nurseries chain of garden centres and farms in Ontario, reports that “in all the sessions where the government was fact-finding, I never once heard that it would entertain phasing in the increases over a few years,” he observes. “This [major increase] was a done deal from the start. They made some minor concessions to make it look like they were listening.”

The situation was similar on Canada’s west coast, according to Linda Delli Santi, executive director of the BC Greenhouse Growers Association for vegetable operations. She notes that while there were hearings held last year by the Fair Wages Commission, they were not at all adequately publicized and her organization actually found out about them by accident. “We were able to quickly prepare and present our concerns and they were similar to those of other agricultural groups,” she says. “But the government did not hear anything that was said.”

Dr. Justine Taylor echoes the sentiment. “The announcement [in early 2017 of an increase in Ontario] took many in the agriculture community by surprise,” says the science and government relations manager at Ontario Greenhouse Vegetable Growers (OGVG). “We had understood that minimum wage was to increase according to the Consumer Price Index as outlined in the 2014 Minimum Wage Advisory Panel report” (see sidebar). She says the abrupt announcement and short timeline “has left many of our growers reeling, wondering how they will absorb these costs given the time it takes for the relevant markets to adjust to these new realities. Our growers, like most employers, wish the best life possible for all employees. We are not against raising the minimum wage, but the speed and rate at which it is being elevated threatens our viability.” Joe Sbrocchi, general manager of OGVG adds that he would like to think that if the government fully recognized the financial impact and the precarious position in which this move puts our growers, “literally putting many of them in peril of bankruptcy,” it might not have moved so quickly, “and if so, may have made more effort to ease the transition.”

Linington points out that the speed of increase in Ontario has been faster than anywhere of which he’s aware. “California is a major competitor and has a major increase planned, but it’s a few years away,” he says. “It’s also tied to economic conditions.”

Sbrocchi agrees that “virtually overnight,” the minimum wage hike in Ontario has made its greenhouse sector uncompetitive compared to other jurisdictions. “For example, BC, the second largest greenhouse produce region in Canada, has a lower per hour rate,” he explains, “not to mention a much more favourable approach to carbon pricing for greenhouse operations.”

The combined impact of the wage increases and the carbon tax in Ontario, says Taylor, will conservatively amount to a cost increase of about 33 per cent for greenhouse owners by this time next year. This is in addition to the indirectly related cost increases expected on fertilizer, packaging, transportation and general crop inputs, and the ‘domino effect’ (workers making more than minimum wage expecting a raise). Sbrocchi asks how any business “can sustain these types of increases to their cost structures and remain viable.”

The fallout
Ontario greenhouse vegetable growers are using multiple approaches to deal with their new financial reality. Sbrocchi believes more automation will be used if and when possible, and that it’s likely more growers will move to more profitable non-food crops such as cannabis. Sbrocchi adds that “like good business people, we will attempt to raise prices to compensate for these cost increases. Our sector is pretty much as efficient as it can be given the current technologies, so cutting hours does not present much of an opportunity.”

Kathleen Hubert, owner of Hubert’s Springhill Nursery (an independent greenhouse and garden centre between Pembroke and Petawawa, Ontario) will be “as conscientious as possible of employee hours, but you can only do so much. We don’t want to have fewer employees and run people harder. That’s not the right way to go. We hope we can manage on the same number of employees, but we may have to cut some back sooner, later in the season, and family members will do more of the work.” Hubert’s customers will also pay more for select items this year that have not seen a price increase over the last few years. Hubert’s grows and sells many types of landscaping and garden plants, bushes and trees. “Some businesses are increasing prices across the board,” Hubert says, “but we are choosing specific items.”

There will also be price increases in Canada’s greenhouse flower sector where the market will allow it, Linington says, but adds that if the prices of some products are increased, competitors charging a lower price will get the sale. He also foresees the use of fewer employees this year and efforts to improve worker proficiency. “Some growers may not grow lower margin crops anymore,” he adds, “depending on their business model. I’d say the most vulnerable product group will be cut flowers as opposed to potted plants or bedding plants.”

In total at Sheridan Nurseries this year, the wage increases will equal about 30 per cent of previous profits. Stensson explains that at his farms, over 100 temporary foreign workers are hired every year, and that this year they will each get about $5,000 more. However, he does think his employees deserve a raise. “Our stores have hundreds of minimum wage students who will also get the increases,” he says. “We do not begrudge the fact that they are getting the raises. We do feel ravaged by the speed with which the increases were implemented. We do not want to reduce benefits to our employees so the only solution is to raise prices. We have already heard from many of our suppliers that costs are rising to cover the minimum wage increase, so inflation will be much higher in 2018 than what the government is touting.”

In Stensson’s view, the average voter does not seem to understand that the economic engine of Ontario is businesses making a profit. “They believe that most companies make too much and therefore can afford this massive increase,” he says. “Some might be able to absorb it but most of us simply can’t absorb it. Any of the people I know in our business in cities in the U.S. where the minimum wage has been dramatically increased have raised their prices to compensate. It remains to be seen whether the consumer will accept the increases.”

And like others, Sheridan Nurseries has also had to bump up the wages of people who already earn more than the minimum. “We cannot expect a supervisor in our stores to make the same as a new cashier,” observes Stensson. “However, we also had to draw the line and say that we could not possibly afford to give everyone a 20 per cent raise.”

Delli Santi says that in BC, with this year’s minimum wage hike, the new employee health premium and the 17 per cent carbon tax increase on her members’ existing 80 per cent carbon tax rebate (which, due to industry expansion projects started two to three years ago, will mean less of a rebate for everyone because the funds are capped), the greenhouse vegetable industry is likely going to reach a breaking point where it’s not profitable anymore. “It’s too fast and too much,” she says, “and while we will continue to try and figure out what we can do to keep our businesses going without eliminating jobs or moving our businesses out of Canada or getting out of food production into other crops such as cannabis, some of that is likely going to happen.”

Recommendations from the 2014 Minimum Wage Advisory Panel in Ontario