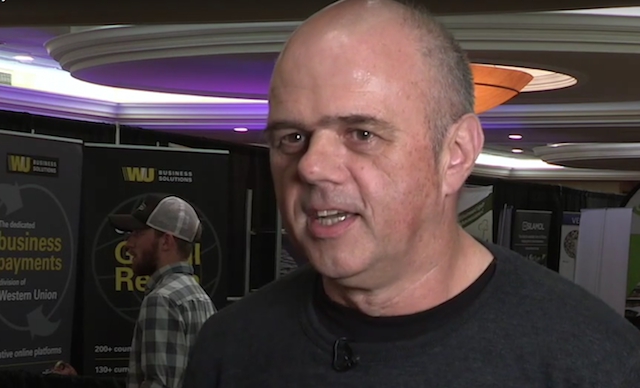 As with any biocontrol, you have to have faith it was developed, packed, shipped and stored correctly. “Efficacy is very difficult to assess,” Grimm noted during his presentation. “They do something, but how much have they done?”

Grimm is a horticulturist by both trade and passion. He graduated from an apprenticeship in Germany, and since then has worked in many areas of horticulture production. He moved to Canada in the late 1980s and spent several years in greenhouse production in Quebec, before settling in southern Ontario.

His perspective on horticulture comes from his interest in science. As a young person, he could not afford university, so he began working in greenhouses while hoping for a more interesting career option to become available. However his years of working in greenhouses soon sparked a fascination with plants and the realization that greenhouse production is an almost limitless platform for applied science.

More than 30 years later, this passion for plants is still alive! Grimm has spent a lot of time working with ornamental, vegetable and nursery crops. He has been working as head grower for Jeffery’s Greenhouses Inc. of St. Catharines since 1998.

This is the third in a series of interviews with speakers at this year’s event. For more on Grower Day, see our feature in the October 2015 edition, starting on page 14.


Related
Beneficial Nematodes: First video of a series
Video report: Microbial biocontrols in vegetable crops
Biostimulants: what are they and how can they work for you?
Application of entomopathogenic nematodes