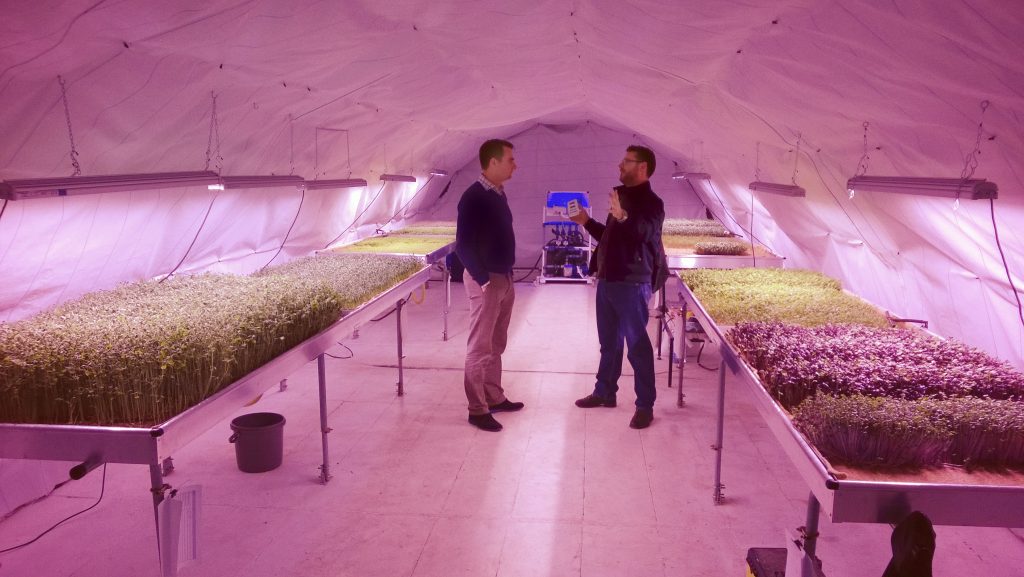 Richard Ballard of Growing Underground and Lars Aikala of Valoya discussing the test installation in 2013.

Growing Underground will start production of leafy greens, such as lettuce, cress, herbs and a variety of micro-greens 33 metres under South London. The production space is located in a disused air-raid shelter in Clapham North.

The plants are grown hydroponically in a system of shelves stacked on top of each other utilizing LED light in the absence of natural light. Growing Underground required the light to be energy efficient and to drive the natural features and taste of their produce.

After extensive testing Growing Underground selected Valoya’s LEDs as they proved to provide best overall performance across a variety of plants.

“The light by Valoya, proved very efficient in driving growth of our micro and leafy greens, as well as in leafy biomass, taste and visual appearance. We have gained significant experience of different lights over the past two years and have selected Valoya for their versatility in our initial phase,” says Richard Ballard, co-founder and CEO of Growing Underground.

“This is a milestone in the history of both vertical and urban growing,” said Valoya CEO Lars Aikala.

“Richard Ballard and Steven Dring, the founders of Growing Underground are realizing a vision many have had but so far have been unable to put into action. We are very happy and honored to be chosen for this exciting business.”

Growing Underground prides itself on being a carbon neutral company. Its hydroponics system uses 70 per cent less water than traditional open-field farming, and because all the nutrients are kept within the closed-loop system, there is no risk of agricultural run-off.

Valoya is a provider of energy efficient LED grow lights for professional use. Valoya LEDs have been developed using Valoya’s proprietary LED technology and extensive plant photobiology research. Valoya’s customer base includes numerous greenhouses and research institutions all over the world.

Related
Inside View: Being keen on green with LEDs… or LEEDs
Ottawa supporting LED research project
More trials underway with mums under LEDs
‘Out of darkness cometh light’