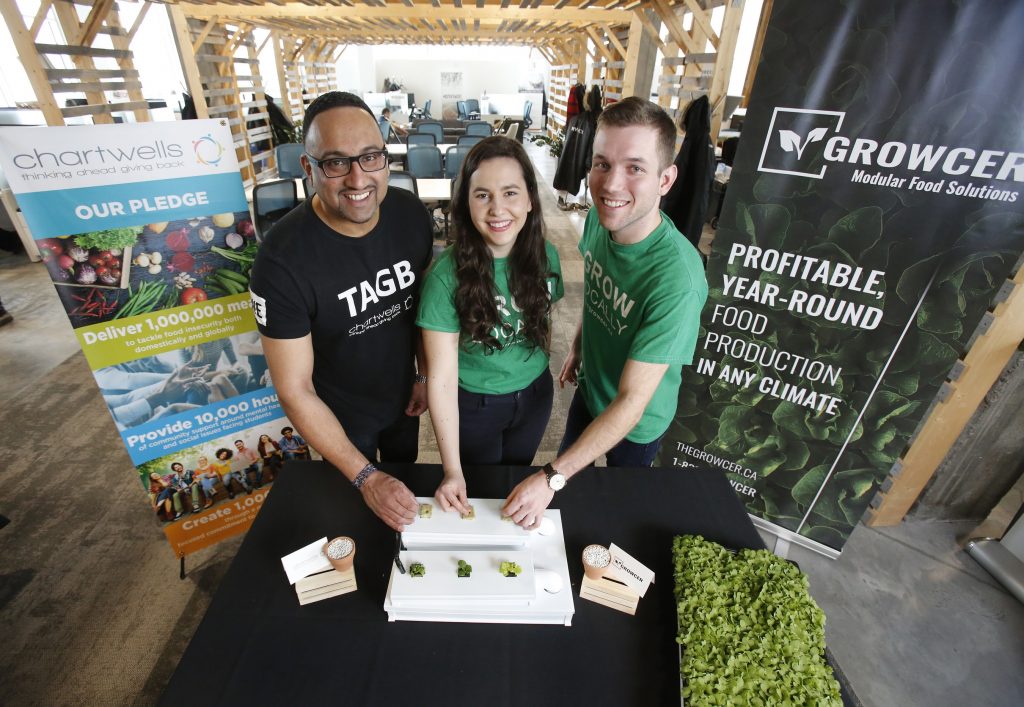 Chartwells, Canada’s largest educational foodservice provider, and The Growcer, announced an exclusive partnership that will bring ‘the 100 foot farm’ to college and university campuses across Canada.

The Growcer converts shipping containers into state-of-the-art vertical farms, growing fresh produce for food insecure areas. Chartwells will be the first to bring this innovative and exclusive program to the higher education landscape in Canada.

Founded by Ottawa students Corey Ellis and Alida Burke in 2016, The Growcer is a farming system combining hydroponic technology with precision climate controls that allows the user to easily grow fresh produce in a contained space. Using 95 per cent less water than conventional agriculture, a Growcer container can grow up to 100 kg of vegetables per week. Because it’s a sealed system, no herbicides or pesticides are needed, and the distance the produce travels to the consumer can be as little as 100 feet – making this the ‘100 foot farm’.

“As part of our Thinking Ahead Giving Back vision, we have made a pledge over the next three years to deliver 1,000,000 meals to tackle food insecurity both domestically and globally, provide 10,000 hours of community support around mental health and social issues facing students and create 1,000 jobs through a more focused commitment to student employment,” said Ashton Sequeira, President, Chartwells. The foodservice provider will be donating 10 per cent of the annual crop grown to tackle local food insecurity.

“We had the opportunity to partner with any of the companies in this space, but we chose Chartwells because of their commitment towards social and sustainable initiatives, their support around student innovation and leadership within their executive team and all the way to their front-line associates,” added Corey Ellis, co-founder and CEO of The Growcer. “Through our partnership with Chartwells, partner colleges and universities across Canada will benefit from having fresh, local and healthy produce grown only steps away from their food halls and cafeterias, no matter the weather. We’re excited that students will get to enjoy locally-grown, nutritious meals throughout the entire year.”

Initially founded in 2016, Growcer technology enables customers to grow fresh vegetables in -52°C to 40°C weather and has been deployed in nearly a dozen locations in the Arctic. They are among the world’s first year-round commercial farms within the Arctic Circle. Growcer’s work has been recognized with awards from Fast Company’s World Changing Ideas and the Entrepreneurs’ Organization, and was recently featured on CBC’s hit show, Dragons’ Den.

“The Growcer’s incredible growth is just beginning with the global adoption of indoor farming. More and more, we are seeing ag-tech innovations such as hydroponics being used to address food security challenges, rising population, food prices and shrinking arable land,” said Nick Quain, vice-president of Invest Ottawa, whose tech acceleration program, the IO Accelerator, has provided The Growcer with business advisory and support since 2016. “We couldn’t be more proud of The Growcer, and congratulations to Chartwells for having the vision to land this partnership with one of Ottawa’s most innovative companies.”