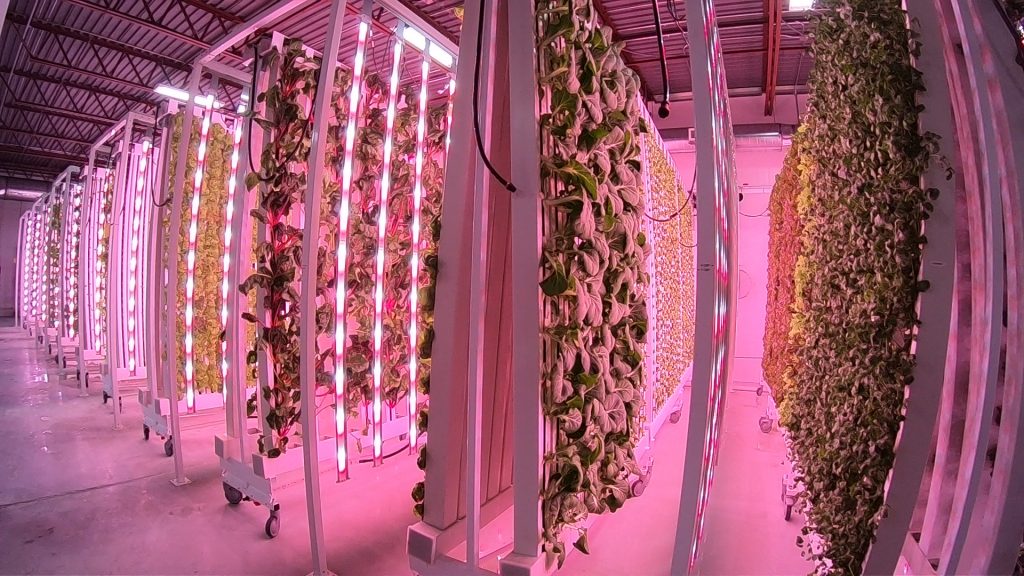 New Canadian agtech company Local Leaf Farms opened the doors to its new Barrie facility yesterday – the first of 20 planned to open by the end of 2025.

The 10,000 square-foot facility contains 6,500 square feet for production. It grows more than 20 cultivars, including leafy greens such as Romaine, arugula, kale, bok choy and baby spinach, plus more than a dozen herbs, including basil, cilantro and parsley.

The demand for local

According to an IPSOS study, 68 per cent of Canadians say the COVID-19 pandemic has made food safety more important to them, and 47 per cent say locally produced food is a top factor driving their purchase decisions. Nearly all Canadians (96 per cent) prefer to buy produce grown in Canada, whether in their local community (21 per cent), their province (41 per cent), or elsewhere in the country (34 per cent).

“Canadian consumers are demanding greater transparency about the food they eat. And that demand has never been more urgent,” said Steve Jones, President and CEO of Local Leaf Farms. “As we begin to consider a post-COVID reality, we need to have real discussions about the stability – and overall future – of food production in this country. Local Leaf is bringing leading-edge technology to the food sector to produce the fresh, safe and sustainable produce that Canadians are asking for.”

According to Local Leaf, the average package of leafy greens travels 3,000 km before it lands in a shopper’s cart at a Canadian grocery store. The journey can reportedly take up to two weeks, causing produce to lose up to 70 per cent of its nutritional value and impacting taste, texture and flavour.

To reduce the impact, all of Local Leaf Farms’ produce can be found at local grocery stores just hours after it is harvested, not only because of the facilities’ proximity, but because it can be delivered directly without passing through distribution centres.

Local Leaf also offers a fully traceable food source, with instant access to information about the food from seed to shelf. The company’s proprietary technology and mobile app allow retailers and consumers to know exactly where their produce comes from, including detailed information on how it was grown, when and by whom. With automated technology, Local Leaf is able to employ an entirely local workforce, eliminating the need to rely on migrant labour – a workforce that has faced severe challenges in the face of COVID-19.

“In addition to our year-round production in our vertical farm, our Barrie, Ontario location has converted its 20,000 square foot backyard to an outdoor community garden. This allows identified residents to grow their own food and learn from our agronomist and team in a collaborative environment,” says Local Leaf Farms.

Local Leaf’s facility is also open to the public once every month, allowing local residents to more closely connect with their food.

In the results of the IPSOS study, more than two in three Canadians (68 per cent) say that eliminating plastic from their food packaging is important, and half (51 per cent) say they would prefer their leafy greens and herb packages be made of a non-plastic, compostable, plant-based material. In contrast, 21 per cent would prefer produce to come packaged in recycled plastic, sometimes referred to as recycled PET.

“That’s why we’re excited to have sourced packaging that is made of non-plastic, compostable, plant-based material for all Local Leaf products,” says the team.

Local Leaf’s Barrie location services grocery stores, food service providers and home meal kit providers within 50km of the farm. All of the produce, which is sold under the My Local Leaf brand, is pesticide- and herbicide-free, non-GMO and packaged in 100 per cent plastic-free compostable packaging. The company is on track to open its next location in Kingston in the coming months – and has a scale goal to launch 20 locations across the country by the end of 2025.

With files from Local Leaf Farms