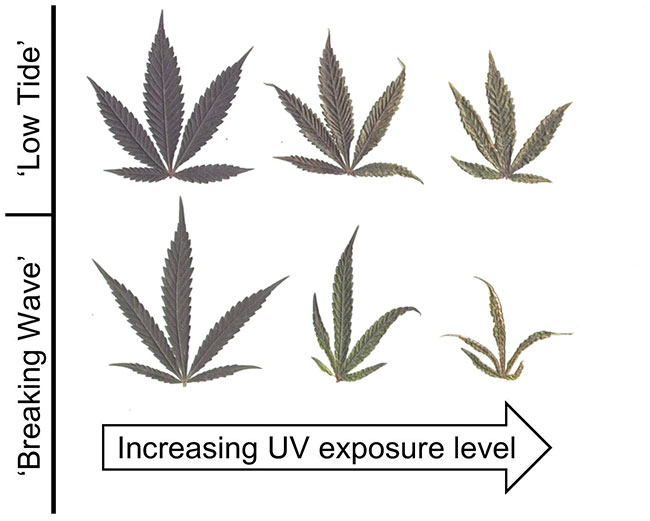 Figure 1. Leaves that developed under increasing UV exposure were smaller and misshapen. Reductions in leaf area limit the capacity for light capture and the plants’ ability to convert PAR into biomass.

Light” is conventionally defined as electromagnetic radiation that is visible to humans, ranging from 380 to 750 nm. Plants, however, can detect a wider range of radiation between wavelengths of 280 to 800 nm. Within this range is the photosynthetically active radiation waveband (PAR) which runs from 400 to 700 nm.

Relative to PAR, ultraviolet (UV) radiation has shorter wavelengths and is divided into three sub-ranges: UVA (315 to 400 nm), UVB (280 to 315 nm), and UVC (100 to 280 nm). Only UVA and UVB are present in sunlight and at photon flux ratios of about UVB(1):UVA(100):PAR(2000). Even though the quantity of UVB in sunlight is low compared to PAR, its higher-energy photons are disproportionately effective in evoking plant responses.

Comparable to how human skin produces melanin with sun exposure resulting in a suntan, it has been theorized that UV radiation can induce increases in tetrahydrocannabinol (THC) in cannabis flowers, where it may act as a UV-absorbing sunscreen. Several older studies are frequently cited to support this theory however, their cultivars had THC concentrations approximately ten times lower than those of modern drug-type cultivars used, both medicinally and recreationally. Our lab sought to answer the question of whether this promising THC-enhancement technique could work in modern, indoor cannabis production systems.

Under the tanning bed

Our experiment exposed two modern cannabis cultivars, ‘Low Tide’ and ‘Breaking Wave,’ to uniform PAR (400 μmol∙m-2∙s-1) over a 12-hour photoperiod and UVB photon flux densities ranging from 0.01 to 0.8 μmol∙m-2∙s-1 (from LEDs with a peak wavelength of 287 nm) for the last 3.5 hours of the daily PAR photoperiod over the entire 60-day flowering cycle.

We found that there were no commercially beneficial effects from any level of UVB radiation (at least, when supplied as described above) on cannabis morphology, yield, and secondary metabolite composition. In fact, the results were counterproductive.

The UV treatments induced older leaves to curl and many to die, while newer leaves became undersized and misshapen (Fig. 1) and had reduced photosynthetic capacity. Increasing UV also reduced both vegetative and generative biomass (i.e., yield) in both cultivars (Figs 2 & 3).

Figure 2. Both cultivars exhibited trends of decreasing vegetative and inflorescence biomass with increasing UV exposure level. (The scale bar in the upper left corner of each image represents 5 cm).

Figure 3. Apical buds (closest to the UV source) exhibited the largest reductions in size and appearance. (The scale bar in the upper left corner of each image represents 2 cm).

Apical buds located closest to the UV source exhibited the greatest reductions in size and appearance. These buds are often considered the highest quality tissues due to their larger size and (potentially) higher cannabinoid concentrations compared to other flowers on the plant. As a result, the negative impact of increasing UV exposure on the value of the crop was disproportionately high.

There was no commercially beneficial impact on secondary metabolite concentrations (Table 1). Compounds measured included THC, cannabidiol (CBD), their precursor cannabigerol (CBG), as well as other terpenes.

Table 1. Increasing UV exposure resulted in reduced cannabinoid concentrations (calculated as a percentage by weight of the dry flower) in ‘Low Tide’ but had no effects in ‘Breaking Wave’, whereas total terpene potency was reduced in both cultivars.

Similar to how excessive UV exposure accelerates skin aging, we noticed that symptoms of plant tissue deterioration, such as leaf senescence, accelerated with increasing UV exposure. Further, while stigma browning is often used by cannabis cultivators to determine inflorescence maturity level, this was not possible in our trials because premature stigma colouration was prevalent under higher UV exposure levels.

Overall, there were dosage-dependent, UV-induced depreciations in cannabis plant health. Further, there was no level of UV exposure (as supplied in this study) that enhanced inflorescence yield or the composition of secondary metabolites measured. Therefore, the results of this experiment do not support the theory that UV can be used as a production tool to increase floral THC concentrations in modern cannabis cultivars.

However, before completely invalidating UV’s potential for increasing cannabinoid potency in cannabis, further research must be done to investigate alternate methods of UV application. The present study used short-wavelength UV radiation, composed primarily of highly energetic wavelengths that are largely absent in the solar spectrum. Further, UV exposures occurred daily during the entire 60-day flowering stage. It is still possible that longer wavelengths and/or shorter exposure periods may have beneficial effects. For example, exposing plants to UV after the cessation of vegetative development (normally about 5 weeks after switching to the 12-h photoperiod) could potentially mitigate leaf malformations that impede yield accumulation.

This article is the first of a two-part series that summarizes the results of experiments that were conducted as part of Victoria’s M.Sc. study at the University of Guelph, School of Environmental Sciences. More detailed results of this study have been published in the open-source scientific journal Frontiers in Plant Science. This manuscript is available to anyone using the following weblink: https://doi.org/10.3389/fpls.2021.725078.

Related
The Taste Race: Light’s impact on crop aromatic and flavour profiles
How to create your ideal light environment
4 key differences between a cannabis greenhouse and an ornamental greenhouse
Grower Day 2018: Are you ready?