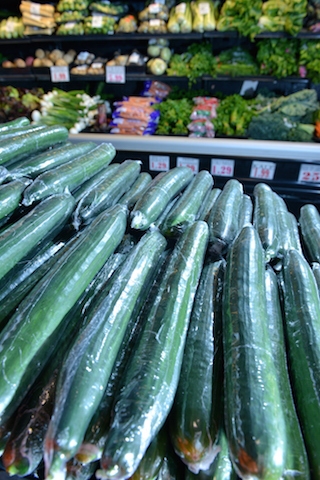 June 26, 2017, Leamington, Ont. – Once you’ve tasted Ontario greenhouse cucumbers, you’re hooked. The taste and freshness are second to none, and when shoppers sample them, they become regular customers.

That’s the business model Ontario Greenhouse Vegetable Growers (OGVG) used to build U.S. demand for Ontario greenhouse cucumbers and increase exports to the U.S. by more than 50 per cent since 2012.

A sampling project of Ontario greenhouse cucumbers in U.S. supermarkets contributed to this growth and continues to convert customers and expand Ontario markets.

“The first project saw 776 tasting demos in more than 500 supermarkets across the U.S. east coast and through the Midwest,” says OGVG Chair George Gilvesy.

“We nearly doubled those numbers again in 201, as we expanded the project and realized how much the sampling demos were increasing demand.

“Studies have shown that in-store demonstrations are an effective tool to reach consumers, with more than 50 per cent of customers purchasing the products they test in-store. That’s why we’re continuing with the project today and consumers continue to look for Ontario greenhouse cucumbers.”

The in-store sample project set out to increase consumer demand for Ontario greenhouse seedless and mini cucumbers. Canada’s greenhouse industry is much larger than that of the U.S., where consumers rely on Canada and Mexico for fresh greenhouse products, such as cucumbers, tomatoes and peppers.

As demand grows with U.S. consumers for fresh greenhouse vegetables, the opportunities grow for Ontario farmers to increase their businesses, create more jobs in the province and contribute even more to the provincial economy.

“Product sampling was a great approach. The in-store demonstrations attracted customers and directly increased product sales – a win-win for the supermarket retailers and for the growers we represent,” says Gilvesy.

Ontario greenhouse vegetable production has been growing by six per cent each year for the past two decades. Technology and innovations have led to efficiencies and increased production, and market development projects like this are also growing the industry by creating demand.

The success of the initial demonstration project in 2014 has kept OGVG supporting its licenced marketers in wide-scale, in-store sampling, of Ontario greenhouse cucumbers in the U.S.

“Accessing new and emerging markets, and expanding existing markets represents a tremendous growth opportunity for our industry. First-hand experience is key, and in the case of cucumbers, taste and freshness can’t be beat,” says Gilvesy.