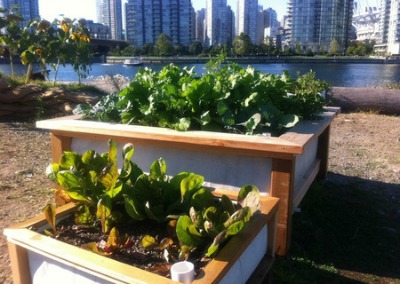 Oct. 24, 2014, Wageningen, the Netherlands — Meeting the challenge of developing a sustainable living may require introducing agriculture in urban areas.

Imagine living in an inner city and buying your vegetables and fruit just moments after they’ve been harvested. Imagine waking up to the rustic sound of a cock crowing. Imagine your household waste and sewage serving to grow even more food in a highly sustainable way. This is the promising picture painted by the EU-funded Supurbfood project.

“The goal of the Supurbfood project,” Han Wiskerke tells youris.com, “is to make urban and peri-urban agriculture much more important than it is now.”

Wiskerke is the coordinator of the project and a professor of rural sociology at Wageningen University and Research Centre in the Netherlands. He goes on to explain that the project also aims to close the food-waste cycle, to shorten the food supply chains, and to create multifunctional land use in cities.

The results of Supurbfood cannot be quantified just yet since the project will continue until October 2015.

MANY HURDLES TO FACE

But it is clear that promoting urban agriculture is likely to encounter some hurdles. Among them, one of the issues is “legislation, most of all,” the coordinator explains.

“For instance human excrement is often forbidden as manure in food production; yet it can be a very valuable component of compost.”

All the other possible problems can be dealt with. The lack of space, for example, can be solved by growing vegetables, nuts and fruit in parks. Poultry and small animals can be kept on rooftops, and in petting zoos.

And “greening” a city makes it a nicer place to live in, with cleaner air and more recreational facilities. Multifunctional land use is key according to Wiskerke.

But the implementation of this ambitious plan is not all straightforward. “Pollution, however, is a problem,” he admits. “Not so much for air pollution; you can wash that off easily, but pollution of the soil; that needs to be monitored carefully.”

Other scientists in the field are generally in favour of the project concept. And they point out that the project’s inherent process of international dialogue is one of its crucial and very innovative aspects. In addition, the sharing of experiences and exchange of best practice makes it unique, and the most promising project of its kind.

There are, however, some intrinsic limitations to this approach.

“Urban agriculture will never be enough to feed the population of cities,” Kevin Morgan, professor of governance and development at the University of Cardiff, in the U.K., tells youris.com.

He adds that this remark should not be seen as criticism, merely as stating a point. He believes that urban agriculture needs to been seen in appropriate perspective.

Nevertheless, Morgan also believes the use of sustainable growing methods –which are vital to make urban agriculture acceptable for city dwellers living nearby – brings an added value by itself, and can in time filter through to large scale rural agriculture.

In the future, policy makers must be aware that urban agriculture is worth the effort of creating new policies and it can be a viable option. This, according to Hans Wiskerke, is the ultimate goal of the project.

In this instance the present economic situation might be an issue.

“In Italy we are in the middle of a crisis, so sometimes administrators have more urgent issues,” notes Gianluca Brunori, professor of agricultural economics at the University of Pisa, in Italy.

But he adds that the public really likes the idea of growing food locally. This approach – even in the context of economic adversity – creates the possibility of making urban agriculture a more important factor in food production for the future.


Related
The top eight gardening trends for 2010
Opportunities to jump on this year
People spending more time in the garden
State of the industry: Great expectations for the year ahead