Contrary to some previous reports, this parasitoid is more effective than you might think. 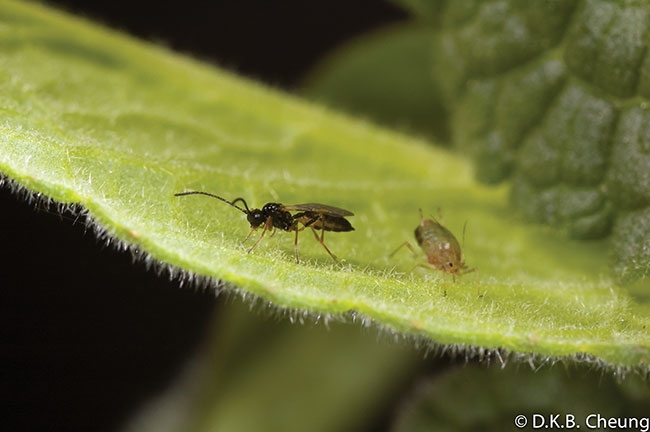 When we started our project to develop a more effective IPM strategy against foxglove aphids, one of the first questions we tried answering was “Why doesn’t Aphidius ervi provide good control?” Growers and IPM specialists have previously reported that this aphid parasitoid does not seem to be effective in controlling the relatively “new” aphid pest – foxglove aphid.

However, experiment after experiment in our lab (and subsequent trials at Cornell University) demonstrated that not only did A. ervi control foxglove aphids, it actually out-performed other biocontrol agents tested.

So if A. ervi is actually effective in controlling foxglove aphids, as demonstrated in our trials (see graph below), how did it manage to get such a bad reputation? And why did so many growers stop relying on this parasitoid and switch to pesticides only to control this aphid pest?

Following an in-depth study of the interaction between A. ervi and foxglove aphids, we realized that the measures of efficacy and release strategies being used weren’t a good fit for the parasitoid or pest.

Great Expectations
How well a pest is being controlled is the ultimate measure of how effective a natural enemy is. However, “good control” depends on the perception of the grower. What one grower might perceive as “good control” might be different for another one, depending on their expectations.

One thing that can drive the perception of “good” or “bad” control is the speed at which it takes place. Unfortunately, the effect of parasitism is not immediate as seen with predators or sprays, which begin to take effect straight away. For most parasitoids, it will take at least a week to see the effect, sometimes two, depending on the temperature of the greenhouse. In our greenhouse trials with A. ervi, true control (bringing aphid populations to nearly zero) wasn’t achieved until about the two-week point. For growers who have been using sprays to control aphids, getting accustomed to this delay in effect requires patience.

Another common measure of efficacy when using parasitoids is the number of mummies found. This gives an indication of the parasitism (or attack) rate. Papery brown aphid mummies begin to appear a week or two after releasing parasitoids. The number of mummies is a good indicator of pest control for parasitoids like Aphidius colemani (the primary parasitic wasp for melon and green peach aphid). But this doesn’t appear to be true for A. ervi.

Know Thy Enemy
Not all aphids behave the same way in response to an attack. The arrival of a parasitoid can trigger two different responses in the aphid colony. Some species (like green peach aphid) stay in the same place and many mummies are found where a colony used to be. Other aphids (especially foxglove aphid) try to run away, or even drop off the plant when in danger. This means that you may not find mummies on the leaves where you expect them to be.

So, which situation is better? Obviously, seeing dozens of mummies is much more reassuring to the grower than only finding one, but BOTH scenarios can lead to good control.

In our trials, we observed that when an A. ervi lands on a leaf, it can clear away all foxglove aphids within a few minutes (whether it parasitizes them all or not) due to the “defensive dropping” behaviour of this aphid species. Jumping ship (or leaf, in this case) might sound like a good defence strategy, but it comes with its own risks.

If the foxglove aphid was first parasitized before it escaped, mummies can end up almost anywhere (on the bench, or on plants a few metres away). If they weren’t parasitized, they still might die from getting trapped in water, injured in the fall, or end up on the floor (not a great place for an aphid). To survive, the aphid will have to expend energy to find its way back onto the plant. The time the aphid spends trying to find its way back is time it’s not spending feeding and reproducing. Scientists call these types of misadventures “non-consumptive effects”. Non-consumptive effects are known to also contribute to effective control (up to 50 per cent of biocontrol can be attributed to this). If the aphid does manage to get back to the crop, and parasitoids are still around, they will have an easier time parasitizing an aphid that is starved and weakened by its journey.

Set A. ervi up for success
Ultimately, we know from our research (including on-farm trials in flower crops in Quebec) that under the right conditions A. ervi can do a great job maintaining foxglove populations at low levels. So what can growers do to make sure they succeed?

Now that you understand this parasitoid better, don’t you think it’s time you gave Aphidius ervi a second chance?

Ashley Summerfield is a research technician in biological control; Michelangelo La Spina, PhD, is a former research associate, and Rose Buitenhuis, PhD, is the research scientist of biological control at Vineland Research and Innovation Centre. Sarah Jandricic, PhD, is the greenhouse floriculture IPM specialist with the Ontario Ministry of Agriculture, Food and Rural Affairs.