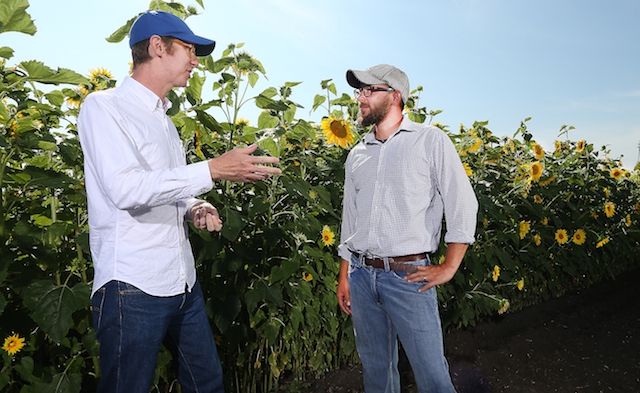 Aug. 8, 2016, West Lafayette, IN – Dwarfed plants add colour and a diversity of architectures to landscapes and gardens, and a Purdue University undergraduate class discovered a key mechanism that leads to their small stature.

Graduate student Norman Best led an undergraduate plant physiology class in an exercise that identified a mutation in a dwarf variety of sunflower, called Sunspot, that keeps the plant short. The eight Purdue students, along with scientists that supported the work, published their results in the Journal of the American Society of Horticultural Science.

A group of proteins, containing an amino acid sequence with an abbreviation that spells “DELLA,” are responsible for suppressing stem growth in Sunspot. When the plant growth hormone gibberellic acid is perceived, it dislodges DELLA proteins from DNA and leads to stalk growth.

The dwarf sunflower contains a mutated a DELLA sequence in one of these proteins. Gibberellic acid is unable to remove the mutant protein, suppressing growth.

“DELLA serves as a guard on the DNA to prevent cells from growing,” said Brian Dilkes, an associate professor in the Department of Biochemistry and Best’s thesis adviser.

“The Green Revolution used mutants of these DELLA guards to redirect the products of photosynthesis from stem growth to seed yield in cereals, such as wheat. But here, the students discovered a mutation responsible for the genetics of aesthetic properties of a landscape variety.”

The Green Revolution, beginning in the 1950s, and the scientific findings that came from it, significantly increased agricultural output. The finding that the same genes determine the varieties of form that are valued in landscape ornamental plants unifies horticulture and crop plants at a molecular level.

Best’s integration of research into the classroom created a richer educational experience while making genuine discoveries worthy of the peer-reviewed literature.

“You can come to Purdue University, take a class, and in the course of your lab work you can do real science where we don’t know the answer. Students in the College of Agriculture uncovered new knowledge that has value to the scientific community,” Dilkes said.

Best said the mechanism could be used to modify ornamental horticultural plants.

“The ability to dwarf a plant is significant for the ornamental industry,” Best said. “We could apply this to new varieties by using molecular markers to select for dwarfism and search the genomes of other plants where similar mutations are very likely to have similar effects on architecture.”