UBC receives $ 10.5M to map
genome of sunflower family
University of British Columbia researchers have received
$ 10.5-million in funding from Genome Canada to enable them to create the first
reference genome of the sunflower family.

March 10, 2010 – University of British Columbia researchers have received
$10.5-million in funding from Genome Canada through the Government of Canada,
Genome BC and international partners to enable them to create the first
reference genome of the sunflower family – work that will pinpoint
agriculturally important genes and could result in a hybrid sunflower that
provides both biofuel and food products.

The sunflower family includes 24,000 species – making it the
largest plant family in the world. It is one of only a handful of economically
important plant families where a reference genome is not available.

A UBC team led by Canada Research Chair Loren Rieseberg will
use new and conventional technologies to sequence, assemble and annotate the
genome of the cultivated sunflower. This new information will drive advances in
crop improvement, weed control and the development of woody sunflower species
as a new biofuel. 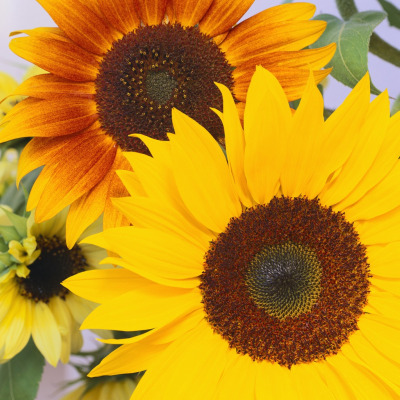 One of the potential applications of this research includes
the creation of a hybrid variety of sunflower, grown as a dual-use crop. The
wild Silverleaf species of sunflower, known for its tall, woody stalks that
grow three to 4.5 metres tall and up to 10 centimetres in diameter, could be
crossbred with a commercially valuable sunflower plant that produces
high-quality seeds, capitalizing on the desirable traits of both species.

“The intent is to have the basis for a breeding program within
four years,” says Rieseberg, a professor in the Department of Botany. “The
seeds would be harvested for food and oil, while the stalks would be utilized
for wood or converted to ethanol. As a dual-use crop it wouldn’t be in
competition with food crops for land.”

In addition, this fast-growing annual crop would be highly
drought-resistant, thanks to desirable traits from the Silverleaf variety, and
would therefore be suitable for use in subsistence agriculture in places like
Sub-Saharan Africa, as well as in much of North America.

Nolan Kane, a post-doctoral fellow with the UBC Department of
Botany, is one of the co-investigators on the project and together with
colleagues at the National Institute for Agricultural Research (INRA) in
France, is doing much of the bioinformatics for the genome project. Steve Knapp
from the University of Georgia is another co-investigator on the project.

“The sunflower genome is 3.5 billion letters long – slightly
larger than the human genome,” says Kane. “The sunflower family is the largest
plant family on earth – encompassing several important crops and weeds. Mapping
its genome will create a very useful reference template for the entire plant
family, which will enable us to work on closely related species.”

The work is also being funded by the U.S. departments of
Energy and Agriculture, and by INRA.

“This significant investment from Genome Canada – and the
support it has helped to leverage from partner organizations – will produce
new, basic knowledge that could ultimately have a major impact on our daily
lives,” says John Hepburn, UBC vice-president Research and International. “The
results of this competition highlight the benefits of collaborative research
funding models, while supporting the innovative and important basic research
being conducted at UBC.”

“Genome BC is very pleased to support this innovative project,
which will capitalize on Canada’s strong genomics infrastructure and leadership
in sunflower genomics, in collaboration with other experts worldwide,” says Dr.
Alan Winter, president and CEO of Genome BC. “The potential applications of
this research are extremely important, both globally and locally.”

Founded in 2000, Genome BC works collaboratively with
government, universities and industry as the catalyst for a genomics-driven
life sciences cluster with significant social and economic benefits for the
Province and Canada. The organization’s research portfolio, over $410 million
since inception, includes 74 projects and technology platforms focused on areas
of strategic importance to British Columbia such as human health, forestry,
fisheries, bioenergy, mining, agriculture, and the environment. Genome BC
programs are funded by Genome Canada, the provincial government of British
Columbia, Western Economic Diversification Canada and other public and private
partners.