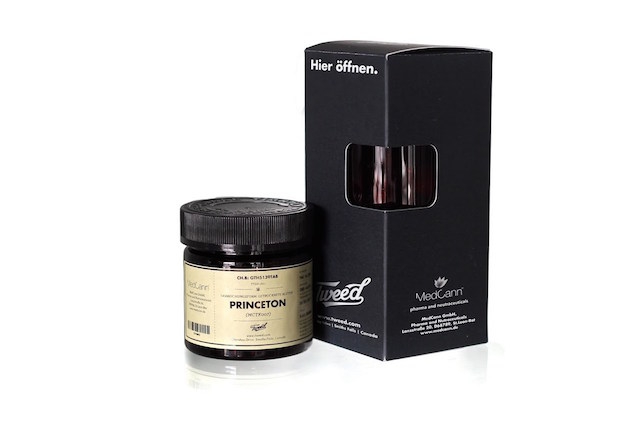 Tweed's cannabis products will be available in German pharmacies in the coming weeks.

Tweed is a subsidiary of Canopy Growth Corporation.

Working with MedCann GmbH Pharma and Nutraceuticals (“MedCann”), a privately held pharmaceutical importer and manufacturer, the transfer marks an important milestone for the company and the first known incidence of dried cannabis being exported from a Canadian licenced producer to a major G7 country.

“Patients will soon have a new choice in variety for their medical cannabis, and we are honoured to be involved in the changing landscape for German access and choice.”

Germans can presently access legal medical cannabis through pharmacies for a variety of medical conditions, though adequate domestic production has not yet been established. Tweed will launch an initial two strains in Germany, and hopes to bring further variety to market as soon as possible.

“Now, in the summer of 2016, through the concerted efforts of MedCann and Tweed, patients across Germany can be assured of a new supply and variety of the highest quality medical cannabis.”

Building on recent announcements in Australia and Brazil, Canopy has now partnered to bring its products, expertise and brands to four continents.

In addition to providing products for sale to the German market, Canopy through its subsidiaries Bedrocan Canada and Tweed, is increasingly focused on the provision of dried cannabis and cannabis oils for the purpose of clinical trials and research to ensure healthcare practitioners, government policy leaders and patients have the best available evidence to make informed decisions on medical cannabis within their regulatory frameworks and practices.

Canopy Growth is publicly traded on the TSX-Venture exchange, and a leading diversified producer of medical cannabis through its wholly owned subsidiaries Tweed, Bedrocan Canada and Tweed Farms. The company operates a collection of diverse brands and curated strain variety, supported by over half a million square feet of indoor and greenhouse production capacity.

Tweed is the most recognized marijuana production brand in the world. It has built a large and loyal following by focusing on quality products and meaningful customer relationships.

Tweed doesn’t just sell marijuana, it facilitates a conversation about a product we’ve all heard about but haven’t met intimately yet. Tweed production occurs across two distinct production sites.

• Tweed Smiths Falls is housed in the former Hershey Chocolate factory at 1 Hershey Drive, and comprises 40 acres of land with over 500,000 sq. ft. of available space.

Precise climate controlled spaces for each stage of cannabis production, from clone to cured bud, allows for the highest quality and widest variety of product in the sector.

Tweed Farms is the largest marijuana-producing greenhouse in the world, with over 350,000 square feet of licensed cannabis production space. The scale and the passive processes allow the Farm to produce environmentally friendly cannabis at an extremely competitive cost per gram. It combines traditional and state-of-the art agricultural techniques, using the natural power of the sun and recycled rainwater to nurture genetically identical plants produced in the on-site tissue culture propagation lab.

Tweed is partnered with some of the leading names in the sector including legendary breeders DNA Genetics and iconic cannabis connoisseur Snoop Dogg.

ABOUT MEDCANN GMBH PHARMA AND NUTRACEUTICALS

MedCann GmbH was founded in June 2015 by Dr. Pierre Debs and Rainer Hofmann. MedCann GmbH is an importer, manufacturer and distributor of medical cannabis products and is federally licensed by the German Heath Ministry.

Debs is a stem cell biologist with over 25 years research experience at world class research universities in the US and Europe.

Hofmann is a successful businessman having established and directed a variety of businesses in the Heidelberg area for over 20 years. MedCann GmbH operates under strict GMP and GDP guidelines for all aspects of sourcing, transporting and releasing medical cannabis products.