Great weather, healthy cuttings and good start left little chance for disease pressures. Most of the growers did not use any biological or chemical treatments as preventive measures. 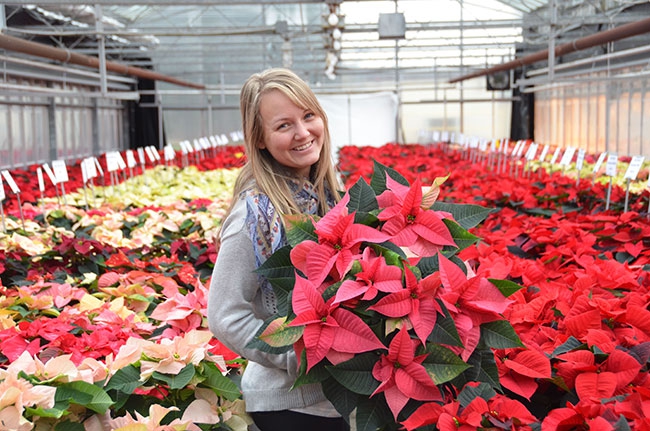 Jessie Rooker of One Floral Group, was among visitors to last fall’s Vineland trials.

February 2015 – Poinsettia is still the largest seasonal flowering crop, even though overall production numbers have decreased by 30 per cent in recent years. In Canada, the decrease over the past five years has been more like 65 per cent.

The good news is that with these reduced numbers, growers were now getting a more livable price.

Sales in the 2013 season, as many will recall, were hindered by the weather. Though many growers could not clean up completely, number of leftover plants was less than five per cent. Some of the leftovers were of inferior quality. Others were grown specifically for late season sales and since the season started later than normal and the bad weather hindered any catching up, there was no market for these plants.

Poinsettia sales last year confirmed we are serving a saturated market. Any increase in production will not find a market. And the ones that get hurt most are the ones that need it the most.

Worse than leading to unsold plants, over-production will create an environment where buyers will want to drop prices in a product that already has slim margins. When supply is greater than demand, the only way buyers know how to grab a bigger share of the market is to drop prices. Some of their suppliers, sadly, will go broke.

It is to the mutual benefit of growers and buyers that they come up with a product they can sell to the ultimate consumer with sufficient margins for everyone.

Growers trying to get a share of the market by dropping prices to the point where there is no margin for error run a great risk of going out of business. I am assuming they know their costs, accurately taking all factors of their operation into consideration. The few growers that cost their product accurately will refuse to take an order that does not have a positive margin profit.

We have to be better marketers and that definitely does not mean dropping our selling prices below our costs of production.

PRODUCTION
Cuttings: The breeders’ stock producers have done an excellent job in producing insect-free, disease-free cuttings of excellent quality. Last year, the cuttings were shipped on time with hardly any shipping problems. Hopefully this is a trend and not an exception.

This could also have been the reason for increased production. Growers build into their program a shrinkage percentage, which last fall ended up to be much lower than what was anticipated. This was due to excellent cuttings and favourable rooting weather. Growers are also implementing technical improvements and paying closer attention to details. Most importantly, they are doing things on time.

Varieties: A flood of new varieties have entered the market over the past 10 years. Some are bad, others are OK, but most are great. In time, the best varieties will be proven and they will take over most of the market.

This past season, the very best varieties also represented the majority of the market, which also leads to minimal shrinkage. This proves the importance of trial sites.

The same advice applies to poinsettias as it does to bedding plants. Try a new variety (or varieties) on a small scale to see how they work for you and how to grow them. You can then decide whether to increase the trial varieties or drop them.

Take the advice of sales people, consultants and other growers to try a new variety. However, only include it in your production after you have grown it and it worked for you growing wise and you’ve had a positive response with sales.

Problems: Insect-wise, whether the greenhouse operation was using biological treatments or chemicals, whitefly was no problem. The winners are those that are doing proper monitoring and treating the crop accordingly – they ended up using almost nothing. The reason was that cuttings from all stock producers were very clean and went into clean greenhouses. Treatments of any kind weren’t needed.

Diseases were not an issue this past season. The great weather, healthy cuttings and good start left little chance for disease pressures. Most of the growers did not use any biological or chemical treatments as preventive measures.

There were few physical disorders, but there will always be the odd light left on overnight (that will not be noticed until later in the season when a section of the crop remains a little greener compared to the rest of the crop)! Or there may be a case or two (or more!) of high night temperatures due to a heat valve that is stuck open, which similarly is not noticed until later in the growing season.

IMPORTANCE OF TRIALS
Many breeders are getting the message and are trying potential introductions in a commercial grower setting in addition to just trial sites. This gives a more realistic picture of the new variety, and gives the grower a chance on how best to handle these varieties if they are introduced.

The 2014 season saw more numbered varieties than ever before, which is a good thing as long we introduce an improved variety but drop some of the ones that are not performing well. As you will see from the photos, growers have different preferences for different reasons. These could be performance-based or influenced by recommendations from others.  Hopefully, “performance” is the main reason for adding a new variety!

Jessie Rooker of One Floral Group, was among visitors to last fall’s Vineland trials.

Melhem Sawaya of Focus Greenhouse Management is a consultant and research coordinator to the horticultural industry. • mel@focusgreenhousemanagement.com.