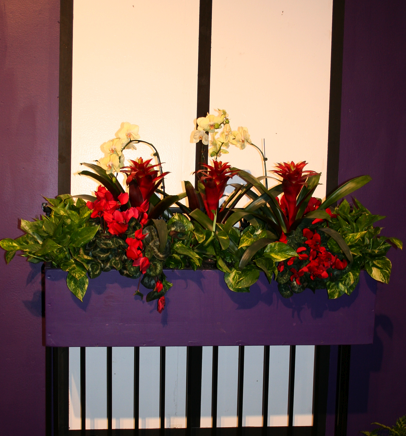 Turn blah to beautiful
Why are some window boxes so beautiful and others so blah? It's all about design, according to the gardener for public education at The New York Botanical Garden.

Why are some window boxes so beautiful while others are so blah?

It's
all about design, according to Sonia Uyterhoeven, the gardener for
public education at The New York Botanical Garden in the Bronx.
Choosing and positioning plants with an eye to symmetry, repetition,
colour, plant shape and size can turn ordinary window boxes into
stunners. Even a mostly green window box with herbs and other edibles
can look beautiful if you mix plants with different foliage and shades
of green. For a dash of colour, add an edible flower or flowering herb.

Here are some of Uyterhoeven's tips.

DESIGN:
Common, inexpensive annuals like petunias and coleus are fine for
window boxes. But limit yourself to a few varieties and pay attention
to the colour of the foliage and flowers.

"Avoid the temptation
to buy one of everything you see," Uyterhoeven said. "Repetition is
crucial in any good window design. Simple symmetry makes it coherent."

A
tall plant on one side of a window box, with a flat carpet of blossoms
filling the rest of the space, can look unbalanced. A window box that's
all impatiens or all begonias "can have a flat look," Uyterhoeven said.
"You need different heights to have a successful arrangement: tall,
medium and a spill-over."

Consider the "architecture" of the
plants, Uyterhoeven said. Some are tall and spiky, some flutter in a
soft wave, and some creep or cascade over the side of the box. Think
about how the arrangement will look when the blossoms are spent.

"If it's not flowering, does it look bland? If the foliage has different shapes, it will still look nice," she said.

You
can give a polished look to any window box by simply alternating
upright flowering plants like geraniums with a trailer, like ivy or
sweet potato vines, which have soft, pale green, heart-shaped leaves.

Some
of the most appealing window boxes sport what Uyterhoeven describes as
an "informal cottage look." Nothing dresses up a window sill better
than a cheerful mass of pansies with painted faces waving softly in the
breeze.

Such arrangements may lack symmetry and other formal
design elements, but the best ones mix a few colours that complement
each other. Window boxes that are too busy can look messy or flat.

Colour:
"Colours change based on what you pair them with," Uyterhoeven said.
Green looks paler next to yellow, while you might not notice the red
veins in a leaf until you pair it with a red or purple flower.

Experiment with colour combinations. Red and purple go surprisingly well together, she said.

White
reflects light and illuminates shady spots. It also can neutralize loud
colours like hot pink, and can separate colours, keeping them from
blending or clashing.

MAINTENANCE: Be vigilant about deadheading
pansies, violas, petunias, marigolds and other blossoms that quickly
fade, and trim plants like coleus and impatiens when they get tall and
rangy. "Don't be afraid to cut back above the leaf node," Uyterhoeven
said. Some cuttings, like coleus, can be easily rooted for a new
arrangement.

HERBS AND EDIBLES: To make an herb window box
visually appealing, mix different shades of green and leaf types. "In a
monochromatic design, the textures and shapes are more prominent than
when you have a mix of colours," Uyterhoeven explained.

Add
colour by including herbs with pretty flowers, like lavender or sage.
Or put edible flowers in the mix, like marigolds, violas or petunias.
Another possibility: nasturtiums. "They have soft, nodding blossoms and
broad happy-face leaves," Uyterhoeven said. Make sure the flowers have
not been treated with pesticides, or use organic suppliers at farmer's
markets.

Consider other edibles too. A tomato plant called
Tumbling Tom "grows just 18 inches high and cascades over the side,"
said Uyterhoeven. "Swiss chard has a beautiful vase-shape." A type of
beet called bull's blood has dark red foliage.

A Latin fusion
restaurant in Brooklyn called Barrio grows many varieties of mint in
its storefront window boxes. The mint is used in everything from
mojitos and specialty cocktails to ceviches and desserts. "We wanted to
do something different," said owner Spencer Rothschild, "but we also
wanted it be useful."

Inspired, I created two edible window boxes
of my own. In one I put feathery cilantro and parsley at each end;
basil and a tiny-leafed variety of oregano in the middle; red lettuce
in back and spiky lavender on either side.

In my other box, I put
a tall sage with purple flowers in the centre, purple-veined sorrel on
one side, and catnip, dill and more basil (no such thing as too much
basil) on the other. In front, creeping thyme tumbles out on the left,
with a tangled vine of orange nasturtiums on the right.

My
designs are not quite as beautiful as the samples Uyterhoeven showed
me. But I used the herbs in dinners three times in a recent week – for
pasta, salad and stir-fry. They were bursting with flavour and
fragrance. And I can't wait to visit my window box, scissor in hand,
for another meal.


Related
Tally Up Time in the Maritimes
Out With the Old and in With the New
Trick or Treat?
Is the customer always right?