Ornamental plants that attracted the most attention this year had unusual but pleasing characteristics. 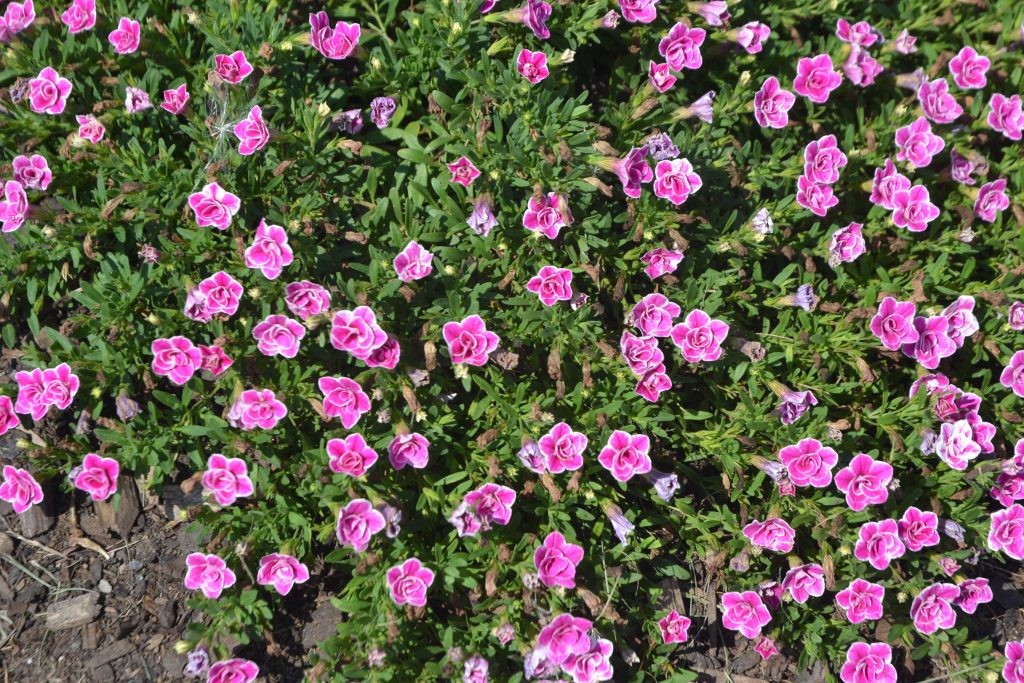 Trialing new varieties can serve many purposes.Not only can they show off container and bedding performance in different climates, they can also be used to gauge public interest and identify emerging trends. This past year was no exception. The climate from June to August 2018 was warmer and drier than normal, but at the same time was plagued with random intense rain events that affected bloom performance for some of the annuals.

A list of the best-received and best-performing varieties was compiled based on votes by visitors and by trial garden staff over the entire 2018 growing season:

Calibrachoa Superbells Doublette Love Swept: [image above] This calibrachoa was selected by visitors to the 2018 trials as one of their favourite container plants, even though its flower diameter was one of the smallest (1.6cm) in the calibrachoa trial. The doubled flower with dark pink petals edged in white is reminiscent of a small carnation.

This is another double flowered calibrachoa that was popular with visitors to the trial garden but the flower diameter is larger (2.8cm), the pink centre is more intense and the narrow white ribbon along the petal’s edge is replaced with a wider white to white blush coloured border. The slightly larger bloom (3.2 cm) of Uno Pink Strike has a single set of petals but nearly identical coloration to that of Double Pinktastic. As a whole, the Uno series is semi-compact and displays very well on the greenhouse bench.

Short, stocky and substantial are three words that come to mind when describing this wine-coloured cockscomb celosia. In the different trial beds, it reached heights ranging from 22-39 cm and a spread of 30 cm by the end of the season. The maximum inflorescence diameter reached 30 cm. Although we did not weigh the flower heads, it is clear that the plant’s thick stalk was required to support the cockscomb’s mass; only one flowerhead was produced per plant. This cultivar was the most popular annual in the 2018 ground bed trials. The mass plantings in the landscape beds were quite eye-catching but mixed container applications with other compact plants should also be considered.

The Garvinea Sweet series continues to perform well in the landscape and outdoor container plantings providing early season bloom and lasting into the fall where it can even tolerate and continue to bloom after a light frost. Fiesta and Sunset were two new colours that were trialled in 2018 with great success. 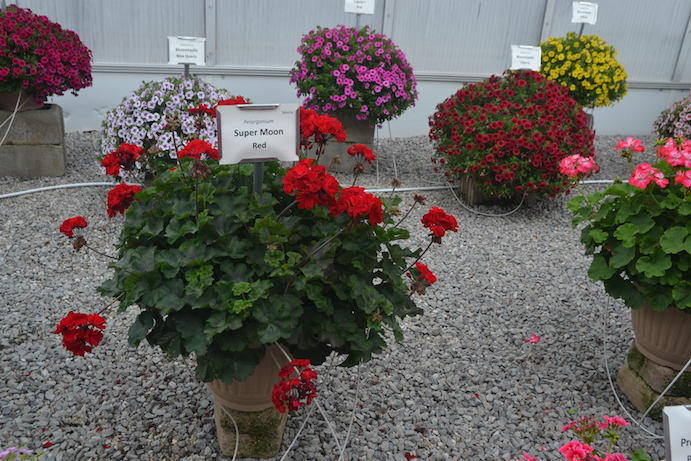 This is a large-flowered, dark red zonal geranium with attractive contrasting foliage. Individual floret diameter can reach 5cm. The vigorous growth habit and heat tolerance helped this selection provide exceptional bloom performance throughout the warm 2018 trial season; Super Moon Red is suitable for both the landscape and container applications. A garden height of 57 cm was achieved by the end of the trial season in October. 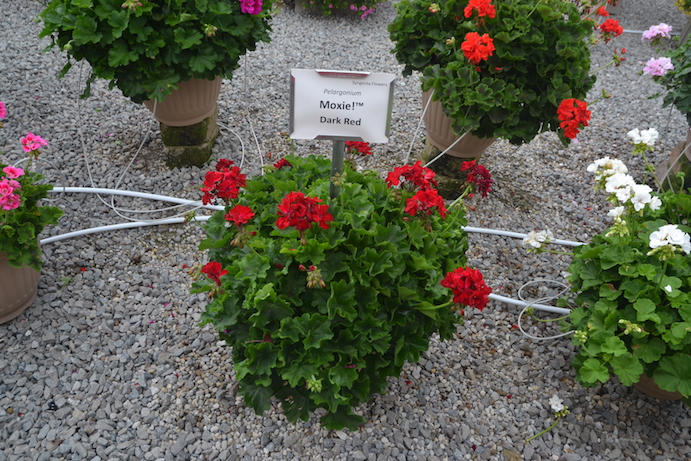 The Moxie series of interspecific geraniums has a compact growth habit and is especially suitable for use in small containers. It has a very strong flowering habit as well. The garden height for Moxie Dark Red this past season was a maximum of 36 cm. 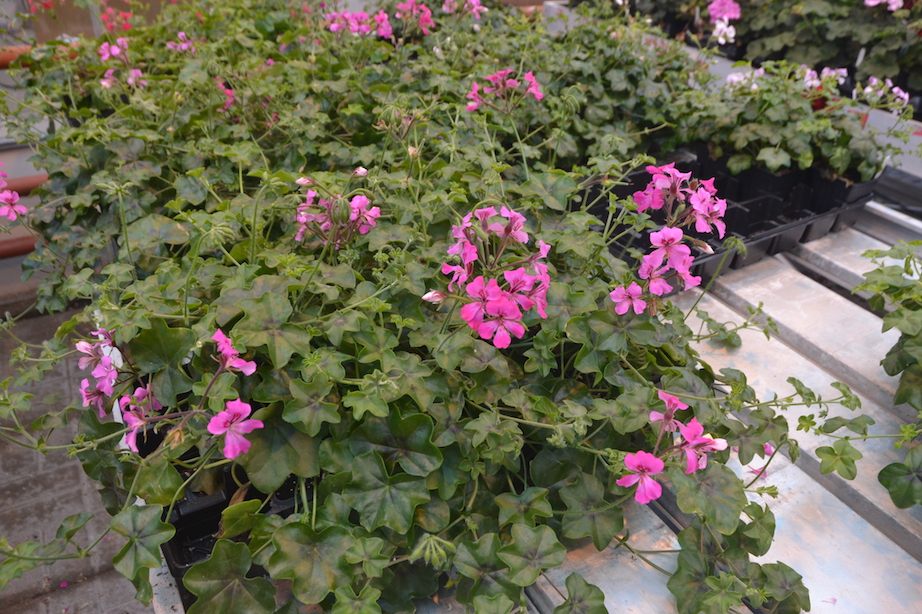 This is a series of seed-propagated, ivy-leaved geraniums that have a compact growth habit with short internodes. It produced blooms throughout the canopy and showed well on the greenhouse bench. This plant seemed to show best in container applications in the 2018 trials. 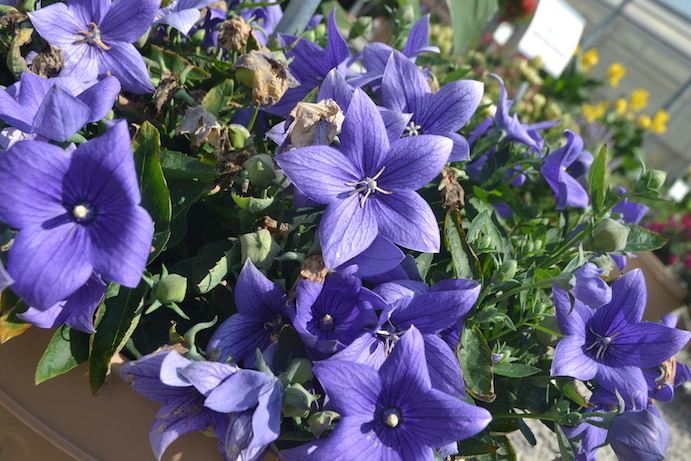 This species is commonly called a balloon flower because its bud appears to expand like a balloon before opening into a cup-shaped flower. The native forms of the species typically reach heights of 30-80 cm. Compact selections such as the Popstar series ranged from 17-23 cm in height with a spread of 24-29cm in the first garden season. This plant is a hardy perennial in our climate but blooms easily the first year from seed. It branches well and kept producing flowers all season long in both containers and flowerbeds. The Popstar series is available in blue, pale pink and white flower colours. 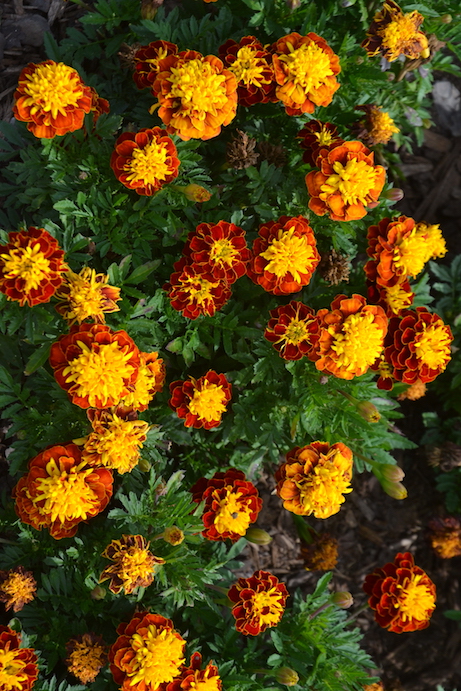 The Super Hero series of French marigolds is the replacement for the Hero series and brings with improved uniformity on the bench  a range of eight colours. Of those eight colours, Super Hero Spry with its bicoloured (dark maroon and golden yellow) petals recently became a national All-America Selections award winner for its compactness, earliness to bloom and stable colour pattern. In the 2018 trials, this entry provided consistent bloom all season long and reached a height of 27-34 cm by October.

This compact verbena with an upright habit kept the bloom front and centre on the greenhouse bench and in the garden. Its compact, mounding habit reduced the tendency of the verbena stems rooting into neighbouring pots while on the greenhouse bench. In the garden, this cultivar continued to bloom in spite of daytime temperatures often exceeding 30°C. End-of-season garden heights ranged from 25-31 cm with a spread of 57-69 cm.

The Empress series of verbena has been selected for its suitability for use in the landscape and containers. It is relatively heat-tolerant and a vigorous grower. Of particular note with Sun Red is the flower colour; the dark red eye surrounded by a lighter scarlet colour creates a very intense red flower that could pair up nicely with Empress Sun White for Canada Day plantings.

The unusually pleasing
Overall, the ornamental plants that attracted the most attention this year had unusual but pleasing characteristics such as the celosia Dracula, the calibrachoas Superbells Doublette Love Swept and the Popstars balloon flower. Other groups of fan favourites encompassed familiar flower forms and growth habits with new, exciting and vibrant colours, including the verbenas Lanai Upright Twister Watercolor and Empress Sun Red; the French marigold Super Hero Spry; the pelargoniums Super Moon Red, Reach Out and Moxie series; the gerberas Garvinea Sweet Fiesta and Sunset; and the calibrachoa MiniFamous Uno Double Pinktastic. They all fit this bill, and because of their resilience to pounding rains, these selections managed to look good no matter what the weather forecast produced.

Rodger Tschanz is the Trial Garden Manager at the University of Guelph. He can be reached at rtschanz@uoguelph.ca