Research at the University of Guelph shows that stationary lighting systems are more effective for plant growth than movable pulse lighting, a new approach to supplemental lighting. 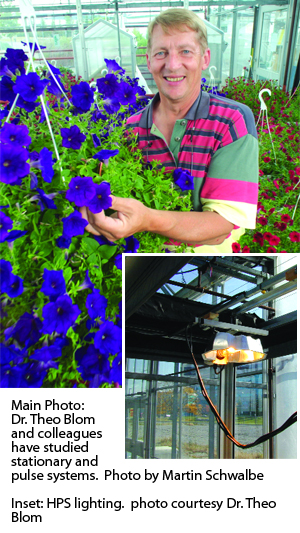 Seldom does the status quo compare to something new. But research at the University of Guelph shows that the current stationary lighting systems used in greenhouses are more effective for plant growth than movable pulse lighting, a new approach to supplemental lighting.

For high-light-requiring crops, HPS lighting is commonly used in greenhouses because it’s energy efficient, durable and provides a good light spectrum for plants during the winter. Depending on the required light intensity for supplementation, the conventional system positions light fixtures in the roof of the greenhouse in such a way that plants obtain a uniform light distribution.

In contrast, the high-intensity pulse system moves lights back and forth on a track system, creating waves of light. The basic advantage is that fewer lights are used, while providing the same total light sum as the standard stationary lighting system.

For the study, the pulse lighting system was set up with an HPS lamp attached to an electric train on rails that moved back and forth at different speeds (0, 2, 8 and 20 mm/sec) for 18 hours per day. Supplemental light provided about 25 to 30 per cent of the total light received by the plants, while the remainder was ambient.

After about 10 weeks, the researchers found no differences in plant height, leaf surface area or dry weight for any species between the four lamp speeds. When the rate of photosynthesis was measured at night (using only supplemental lighting), the researchers found that light use efficiency dropped sharply when the lamp speed increased from stationary to 2 mm/sec. Subsequent increases in lamp speed showed a continued but lower decrease in light use efficiency for chrysanthemum, petunia and tomato plants.

Blom says because pulse lighting is not as efficient as HPS lighting, growers should continue using their standard stationary lighting systems to obtain optimal growth conditions for their crops.

Additional funding was provided in part through contributions by Canada and the Province of Ontario under the Canada-Ontario Research and Development (CORD) Program, an initiative of the federal-provincial-territorial Agricultural Policy Framework designed to position Canada’s agri-food sector as a world leader. The Agricultural Adaptation Council administers the CORD Program on behalf of the province. n

Katie Savage is a writer with the SPARK (Students Promoting Awareness of Research Knowledge) program at the University of Guelph.