Dec.
18, 2009, Vancouver –
Valcent Products’ vertical farming technology was named one of the Top 50 “Best
Innovations of 2009” by Time
Magazine. 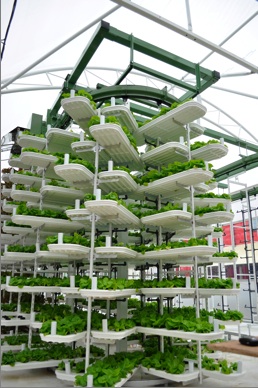 Dec.
18, 2009, Vancouver –
Valcent Products’ vertical farming technology was named one of the Top 50 “Best
Innovations of 2009” by Time magazine.

“Real
estate – the one thing we're not making any more of,” reports the magazine.
“That might be good news for landlords but not for the world's farmers, who have
finite cropland to feed a growing global population. The answer: build up by
farming vertically. Valcent is pioneering a hydroponic farming system
that grows plants in rotating rows, one on top of another. The rotation gives
the plants the precise amount of light and nutrients they need, while the
vertical stacking enables the use of far less water than conventional farming.
But best of all, by growing upward instead of outward, vertical farming can
expand food supplies without using more land.”

Valcent
pioneered a vertical farming technology, developed in their El Paso, Texas
research facility, which was further honed and refined in Europe. “We are
honoured that our vertical farming technology is recognized as a top invention
by Time magazine,” says
Chris Bradford, president, CEO, and director of Valcent Products Inc. “Vertical
farming is no longer a pie-in-the-sky concept dreamed up by academics in ivory
towers. We have entered a new era of urban agriculture where we can deliver
locally grown crops that provide a nutritionally superior product that is
healthier for the people and animals they serve.”

“VertiCrop,
a commercial high-density vertical growing system, is being employed in
controlled environments such as a glasshouse, poly tunnel or warehouses, which
increases production volume for field crops up to 20 times over but requires as
little as five per cent of the normal water supply,” adds Bradford. “It is a
non-GM solution to food problems, using trays on a looped dynamic conveyor belt
and automatic feeding stations to grow plants efficiently. It can be adapted to
the needs of vegetable, herb, fruit and flower producers.”