Features Crops Vegetables
Tomatoes: the shape of things to come? 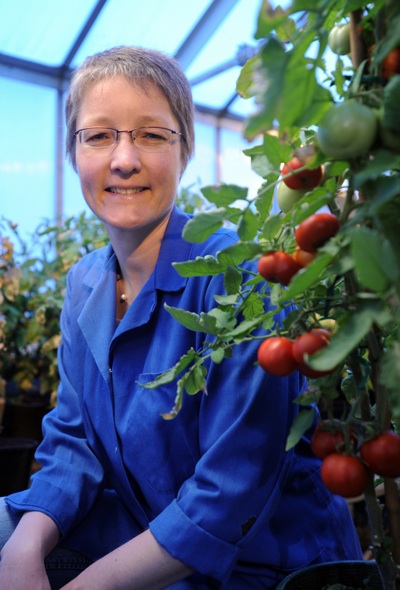 The award, presented each year at the OARDC Annual Research Conference, recognizes outstanding achievements by an OARDC faculty member at the rank of assistant professor or associate professor. Winners receive a plaque, $1,000 and $3,000 for their research project’s operating expense account.

An assistant professor in the Department of Horticulture and Crop Science, van der Knaap is a leading scientist in the field of fruit morphology variations. She conducts genetic, molecular and developmental studies to understand how the tomato plant evolved from having berry-sized fruit to having the wide array of cultivated shapes and sizes it has today.

Genetic variation for traits such as fruit morphology has been studied since the days of Mendel. But van der Knaap and her colleagues determined the actual molecular mechanism for such traits. The finding could lead to greater understanding of how fruits and plant species diversify and how plants, in general, develop.

The work could open the door as well to “designer” tomatoes and other vegetables. Breeding such new varieties could help growers serve specialty markets and processors to cut costs.

The gene van der Knaap and her team discovered, dubbed SUN, controls the elongated shape of certain tomato varieties. SUN, as a so-called “domestication gene,” was selected by humans who used the tomato as a food crop.

Since joining OARDC in 2001, van der Knaap has garnered more than 2 million dollars in extramural funding to support her research and that of her colleagues, including an equipment award to provide instrumentation for high-throughput genotyping and sequencing. She received the 2003 National Science Foundation (NSF) Young Investigator Award in Plant Genome Research and since then has received two other NSF grants.
She holds a doctorate in genetics from Michigan State University and bachelor’s and master’s degrees in plant pathology from Wageningen University, Wageningen, the Netherlands.

OARDC is the research arm of Ohio State’s College of Food, Agricultural, and Environmental Sciences.

Kurt Knebusch is a communications specialist at OSU.