Features Business Trends
TO RECYCLE, OR NOT TO RECYCLE?

A survey on the status of nutrient solution recirculation in Ontario was conducted between 2000 and 2002. The goals were to determine how extensively nutrient recycling systems were used in Ontario’s greenhouse industry and also to understand the problems that growers have encountered or are concerned about.

A survey on the status of nutrient solution recirculation in Ontario was conducted between 2000 and 2002. The goals of this survey were to determine how extensively nutrient recycling systems were used in Ontario’s greenhouse industry and also to understand the problems that growers have encountered or are concerned about. The data collected from this survey have established baseline information for the industry. This will allow us to establish reference points with respect to the deployment of nutrient recycling systems and to better focus our future research efforts to meet the needs of the greenhouse industry while responding to environmental concerns. Several years have passed since the initial survey but we feel that the responses of the growers still represent one of the most comprehensive studies available and show the greenhouse industry to be a proactive and environmentally conscious community. 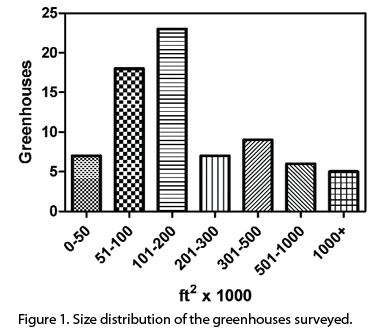 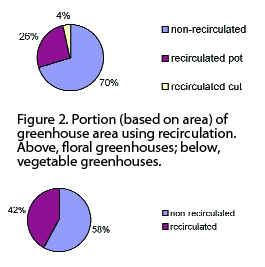 The following represents a brief summary of our findings.

Figure 2. Portion (based on area) of greenhouse area using recirculation. Above, floral greenhouses; below, vegetable greenhouses.

History of application of recirculating techniques:
The average period that the greenhouses visited have used nutrient recycling was 5.7 years, ranging from 0.75 years to 25 years.

Quality control of nutrient solutions:
Forty per cent of floral crop growers visited, who recirculated their nutrient solution, manually adjusted their solutions. They measured the EC (electrical conductivity) and the pH of their recycled solutions up to three times per week and added nutrients and watered as needed.
Sixty per cent of flower growers visited, who recirculated their nutrient solution, used automated systems to adjust their solutions. These systems adjust the nutrient and water content of the solutions based on automated sensing of EC and pH of the solution. Nutrients and water are added until the EC and pH of the solution reach pre-programmed values. These systems used two methods to add fertilizer to the solution: injection of concentrated nutrients directly in-line as water goes to the crop or for premixing in a storage tank prior to sending the solution to the crop. 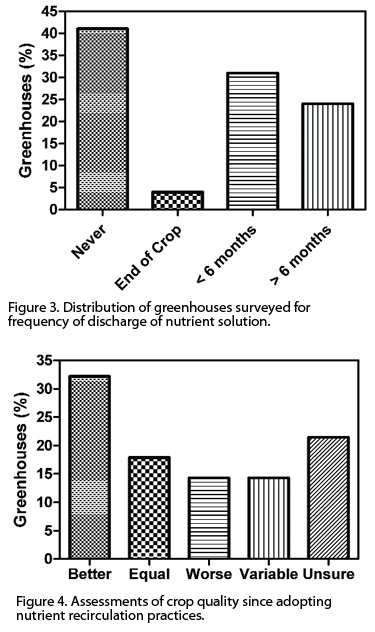 Acknowledgement: The survey was financially supported by Flowers Canada (Ontario), the Ontario Centres of Excellence (CRESTech) and Environ-mental Canada. We thank the growers for their support, and appreciate the input from Wayne Brown (OMAFRA) and Shalin Khosla (OMAFRA) during the survey.


Related
GRASSROOTS EXPERTISE ON GARDENING TRENDS
Spring rebound
Flowers down, veggies up, in ’08 sales
State of the industry: Great expectations for the year ahead