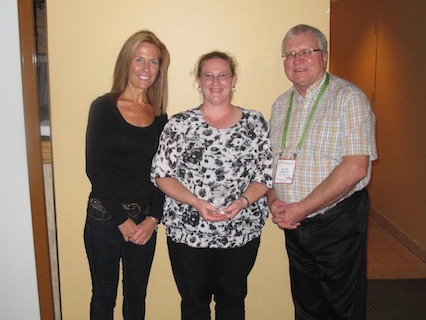 Oct. 6, 2016, Niagara Falls, Ont. – This year’s Top 10 Under 40 award winners were announced during The Gathering reception of the Canadian Greenhouse Conference.

The awards program, now in its third year, is sponsored by Paul Boers Manufacturing and Prins Greenhouses. It is presented by Greenhouse Canada.

The winners will be profiled in our November edition.

Without further adieu, here are the 2016 award winners.

Brian Bain is a horticulturist and the founder/owner of Ecobain Gardens, an urban vertical hydroponic farm in Saskatoon. He has spent the last six years developing a sustainable, environmentally friendly way to grow fresh produce for Saskatchewan all year round.

The business has flown past all set expectations and is looking at continued growth. Ecobain Gardens will produce enough local fresh living greens and herbs to supply a major section of the western Canadian market.

Look for this company to continue its impressive growth rate in the coming years.

Julie Clancy grew up in the business, but has only been working in it full-time for 19 years, including the past 15 years as manager/purchaser at Belgian Nursery.

This is a retail only garden centre that has continually updated its greenhouses and product mix to remain a retail leader in its region.

Julie has a “hands on” management style in working with her co-workers and works had to “keep the lines of communication open, which in turn creates engaged employees dedicated to quality plants and service.”

It has been 11 years since he decided to start working at his Dad’s farm, and seven years since they built the greenhouse that he co-owns and operates.” Big Marble Farms started out as County Fresh Farms in 2009 as a four-acre glass greenhouse, growing to 15 acres over the next four years and now to 35 acres with a packing facility this year.

Ryan is dedicated to mastering the application of lighting to ensure year-round production.

Paul Doef helped out in the family’s greenhouse vegetable operation as a youngster, and has been working in it full-time since 2004.

Continuing a family tradition set by his parents Joe and Helen, Paul has served on the board of the Alberta Greenhouse Growers Association and has been treasurer the past three years. He has also been the AGGA’s representative with many farm safety discussions over the past few years.

If the last name sounds familiar, it is because Paul’s brother Eric was one of last year’s Top 10 Under 40 award winners.

Debbie Foisy has only been in the industry since 2009, but has quickly mastered the art of growing premium plants and applying strong social media programs to create a destination garden centre.

She has been the driving force behind the increasingly popular online Greenhouse Marketing Forum, which has grown from its original Alberta roots to now include members in many other regions.

In 2013, she won the Grower Of The Year award from the Alberta Greenhouse Growers Association, and she followed that up a year later with her selection as one of three finalists in the Dummen/Red Fox Young Retailer Of The Year awards program.

In 2013, she became president of the Alberta Greenhouse Growers Association, the first president who was younger than the association itself.

One of the industry’s fastest growing segments is green roofs, and one of that sector’s leading companies is Sedum Master Inc.

Company president Greg Magda has been a grower of sedum vegetation for the green roof industry for the past 14 to 15 years.

The company has enjoyed strong and steady growth with new products AND new markets over that time. Sedum Master is now branching into retail sales.

Sedum Master Inc. was built on a foundation of three generations of farming, which allows for years of vast knowledge in agriculture and business growth.

Cathy Oulton is our first winner from the Maritimes. She has developed a popular garden centre in a region that has several large big box competitors only minutes away, and she thrives on the competition.

When it comes to plant quality and service, said her award nominator, Bloom Greenhouse & Garden Centre stands well above the crowd.

“Cathy is the epitome of someone with a strong work ethic. She has put countless hours into learning what her customers want and how to have it on hand, or how to grow it.”

Cathy also finds time to serve of the board of directors of Greenhouse Nova Scotia, the grower association in that province.

Christie Pollack has been working for 16 years in the industry, beginning with part-time work as a teenager in a local greenhouse. That opportunity definitely spurred her career choice, and she and her husband set up their own garden centre just a few years ago.

She says there are at least four essential components of a great garden centre. Included are superior customer service, great quality plants, a great team to work with (“because,” as Christie emphasizes, “they are the face of your business”), and dedicated community involvement.

She’s already an industry leader in social media marketing, including an exceptional website, blog and online catalogue with shipping throughout Canada. It’s all part of the game plan.

Jennifer Sheardown has worked in the floriculture industry for about 12 years.

After graduation from Laurentian University and Niagara College, she worked for Baxter Corp. doing sterility testing and quality control, and then for the Junction Creek Stewardship Committee working to rehabilitate an urban stream, before moving on to Escarpment View Growers, and more recently to Waldan Greenhouses as assistant grower.

She handles much of the watering, including fertilizer application decisions, PGR (growth regulator) decisions and applications to ensure plants are the appropriate stage and height at time of sale, which requires adapting to the changing seasonal climate within the greenhouse.
Jennifer takes part in weekly meetings with consultants, sales reps, and industry experts.

She attends numerous workshops and conferences and takes notes to bring back for other growers unable to attend.

She also does insect scouting and maintains the banker plant/colemani system, and has a good understanding of the complexities of biological. She has exceptional leadership skills and is always working to learn new things.

Andrea Westra grew up in the family cut flower business and has taken every opportunity to advance her managerial skills.

She has been working in the business full-time since 1998, and before that was often helping out during the summers and after school. Greenhouse horticulture is definitely in her blood.

Her primary role is operations manager, where she organizes the resources to ensure the many day-to-day tasks are completed.

Andrea is the driving force with the company’s highly successful biocontrol program. She has attended numerous workshops over the years to keep updated on the latest pest threats and control measures. She also works closely and constantly with IPM specialists to fine-tune the company’s pest management program.

The key to a good biocontrol program is teamwork, she says, in having everyone working in the crop able to tell the good bugs from the bad bugs. Andrea is definitely a great teacher and motivator.