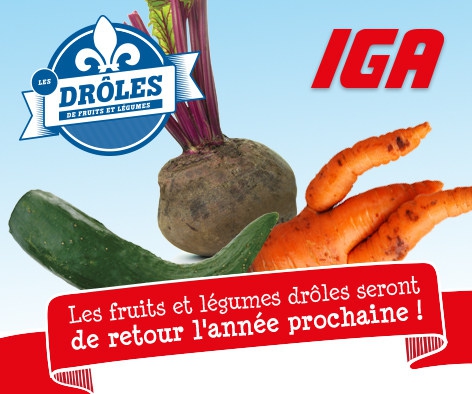 IGA and its odd looking fruit and vegetable. (CNW Group/IGA)

With average sales increases of 24 per cent for the six varieties when compared to a year without this offering, the company views the results as very positive.

• 3.6 tons of odd looking fruits and vegetables were sold in six weeks.

• Beets (usually less popular), flew off the shelves this year! Sales were up by 91 per cent.

• Carrots sales were also on the rise with a 31 per cent boost in sales. The 15 lb. bags – perfect for cooking large quantities – certainly helped.

• Odd looking fruits and vegetables are 30 % less expensive on average, providing significant savings for the people who could recognize the produce’s inner beauty.

• The experts at IGA shared a weekly recipe on the web, social media, and in the flyer, featuring one of the six odd looking fruits and vegetables to inspire Quebecers with classic and not-so-classic suggestions for preparing them.

The experiment was so convincing, that IGA is announcing the return of odd looking fruits and vegetables next year.

“Customers had been asking for them for quite some time,” says Yvan Ouellet, vice-president of procurement & merchandising, perishables at Sobeys Québec, “but their popularity completely exceeded our expectations. We can’t deny it – Quebecers are eating up odd looking fruits and vegetables – quite literally.

“In light of this success, we can only do it again, and we may even be adding new varieties of exclusively Quebec produce next harvest season!” he concludes. And we must also mention that this program wouldn’t have achieved the degree of success and met the demands of consumers without the collaboration and support of the producers involved.”

It bears repeating that odd looking fruits and vegetables are a perfect fit with The Joy of Eating Better movement, launched by IGA in May 2014 with the goals of supporting the Quebec agro-food industry, encouraging Quebecers to buy local products, eat a healthy diet, discover new flavours, and cook more.

IGA is the largest group of independent grocers in Canada and its presence in Quebec dates to 1953. IGA retailers are constantly seeking new ways to serve their customers better. The IGA banner includes over 300 IGA, IGA extra, IGA express, and IGA mini stores.