Getting tomato and pepper crops off to a good start requires optimal temperature and irrigation management. Since every variety and farm is different, look at your own plant model before making any changes. 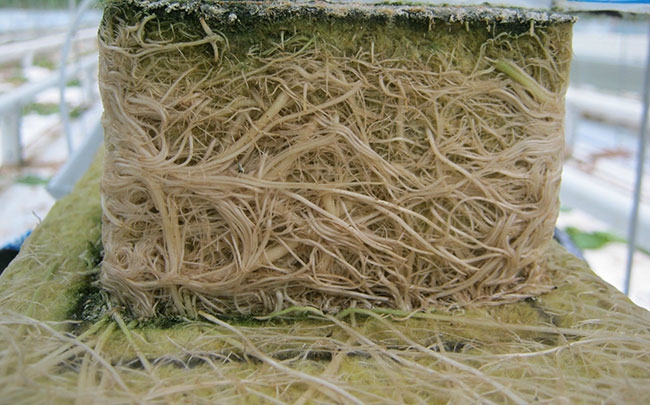 January 2017 – Since most farmers start the growing season in December and January, the space at propagators is limited. Up to 48 heads per square metre spacing is not an exception. This results, in most cases, in a vegetative plant with a few tiny hairy roots.

It will be the job of the grower to transform the plant into a strong generative fruit producer. In the following paragraphs I will outline the start of an early January planting.

START OF THE TOMATO GROWING SEASON ON A ROCKWOOL SLAB
Temperature: Since the humidity on the farm is lower than at the propagator, start on the planting day with a moderate 20 C. If the greenhouse has a curtain, keep it closed so the plant can slowly adjust to the new climate conditions. If you have snow pipes, use them as well since there is less direct heat to the plant. Start with a night temp of 18.5 C / 19.5 C and a day temperature of 21 C (+2 C on light – if it is sunny you increase the day temperatures 2 C extra).

Depending on the number of sunshine hours these temperatures should be increased or decreased. As a rule of thumb, don’t increase the day temperature until the plant has good strength and lower the night temperature when the plant doesn’t have enough strength due to the dark conditions. Keep in mind that the roots are the last in the line of getting energy. For that reason don’t “push” the temperature level too much until you have good roots in the block of the plant.

Irrigation: Since the uptake of water is too easy for the plant we start next to the hole. During the first few days, one to three irrigations (for a 42-day-old plant) per day is enough in most winter situations. The plant needs a lot more water if the outside temp is -10 C with a low humidity, compared with a day of -3 C and a south/west humid wind.

The plant is forced to “work” almost 21 to 23 hours to take up the water from the block and transport it to the leaves. This searching for water leads to strong root development throughout the block. When the plants gain in size, the irrigation hours during the day have to be extended, but make sure that the plant has a slightly darker green colour half an hour before sunset.

A bit of drain in the middle of a sunny day is always good to freshen up the block (though not in the first five days). When you notice that the blocks are too light in weight at the end of the afternoon, give a night irrigation around 10 p.m. When you enter the greenhouse in the morning at 7:30 a.m. and the blocks are very light in weight, give a small irrigation, but don’t fill up the whole block, just continue your normal irrigations in the middle of the day. Depending on the plant size and pipe temperatures a night irrigation could become standard when the first cluster starts flowering.

It is better to stop on time in the afternoon and give a night irrigation so that the plants are on “colour” before sunset than to irrigate until late in the afternoon. When the first cluster starts developing the first tomato the plant is ready to be placed on the slab hole.

START OF THE PEPPER SEASON ON A COCO SLAB
Temperature: On the day of planting start with a temp of 20 C and in a glass greenhouse keep the curtain closed. A day temperature of 21 C (+2 C on light – if it is sunny you increase the day temperatures 2 C extra), and a night temperature of

Irrigation: The plants will be planted directly on the hole. The goal for the first 10 days is to anchor the roots of the block into the slab. For the first week the plants will need two or three irrigations in the middle of the day between 11 a.m. and 1 p.m. depending on pipe temperatures, and one or two night irrigations at 9 p.m. and 2 a.m. to encourage root development into the slab. As soon as the roots are well established throughout the slab, stop with the night irrigations and extend the day irrigation hours a little bit to form a strong plant model. The relatively short irrigation period will encourage the roots to search for water during the late afternoon/night and early morning, which will result in a well-developed root system throughout the slab.

Since every variety and farm has its own characteristics look at your own plant model before making any changes.