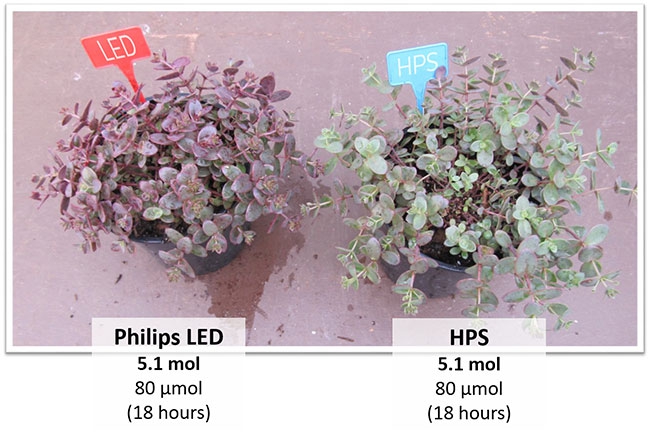 One example of responses to LED and HPS lighting.

January 2017 – As one of several plant specialists on the Philips Lighting horticulture global team, I regularly talk with growers abfout the benefits of using LEDs in their greenhouses. Often growers comment to me that LEDs are too expensive or that the technology is too new or that LEDs haven’t been proven to work.

And often growers tell me LEDs are not needed because they have sufficient lighting in their greenhouse either through natural light or through their use of supplemental light, i.e. high-pressure sodium fixtures.

However, the reality is that many growers, whether growing floriculture crops or indoor vegetable and fruit crops, could benefit from more light in both duration and intensity and many growers would benefit specifically from the light spectrum that can be provided by LEDs.

Regarding LEDs being new and unproven, the reality is that LEDs aren’t new. In fact, LEDs have been used in greenhouses in Europe for almost 10 years and have been proven to improve the quality of crops as well as the speed in which crops grow. And while LEDs may appear expensive if comparing in simple terms as a fixture-to-fixture cost, there are several additional factors that need to be considered to accurately determine return on investment and payback.

To begin the conversation, light is visible radiation. Light is measured in nanometers and describes only a portion of electromagnetic energy that is detectable by the human eye. Most importantly for growers of any crops, light is the energy source that drives plant growth. Let’s look at the three most common myths about LEDs as they pertain to greenhouse lighting.

MYTH 1: LED LIGHTING IS NOT NEEDED BECAUSE WE GET ALL THE LIGHT WE NEED
Too often humans define light as the light they see. Growers may think it is extremely sunny outside and “I have lights in my greenhouse, therefore, my plants are getting the light they need.” To know if this is true in your greenhouse, one must first start with a solid understanding of four key lighting terms and specifically, the importance as the terms relate to horticulture: photosynthetic active radiation; micromole; mol; and daily light integral.

Micromoles: Micromoles is a measurement of PAR photons delivered per square metre per second.

Mols: Mols is a measurement of PAR photons delivered per square metre per day.

In North America, growers measure greenhouse lighting using a variety of units including lumens or lux, foot candle, joule and micromole. The latter, micromole, is the light measurement unit preferred by horticulture researchers because it is the only unit that measures PAR photons – again, PAR photons drive plant growth.

Now there are three factors of horticulture lighting that are fundamental to developing your greenhouse lighting protocol: 1) intensity; 2) duration; 3) spectrum.

Intensity: For horticulture lighting, intensity refers to the amount of mols being delivered to the plant at the plant canopy level.

Duration: Very closely connected to intensity is duration, how long a crop should be lighted to achieve optimal photosynthesis.

Roberto Lopez, Ph.D., through his research at Purdue University, developed a comprehensive guideline for the recommended average daily light integral (DLI) for the most common cultivars. Through his research, Dr. Lopez found that in order to produce a high-quality crop, most plants need a minimum of 12-20 mols of light per day.

During the winter months when the days are much shorter, the sun is less intense and sits lower on the horizon and inside light levels at the crop canopy measure 4-5 mols per day. (See Illustration)

Both Cryptochrome and Phytochrome are the important pigments in the chlorophyll A and B for optimum photosyn-
thetic activity. Chlorophyll utilizes the blue and deep red wavelengths efficiently and effectively for plant growth, development and morphology.

Cryptochrome/Anthocyanin are the plant’s photoreceptors that are sensitive to blue light (400-500 nm) and can affect a plant’s morphology (compactness), stomatal activity and pigmentation.

Phytochromes are photoreceptors that are sensitive to red light (600-700 nm) and affect a plant’s morphology (elongation), flowering and germination.

The focused spectrum of LEDs supports photosynthetic activity. In spite of what many growers may believe, most can benefit from LED lighting because LED lighting can provide the needed intensity, duration and spectrum. In other words, LEDs deliver the right light spectrum for the right amount of time and the right intensity for optimal plant growth.

One example of responses to LED and HPS lighting.

MYTH 2: LEDS WILL NOT IMPROVE THE QUALITY OF MY CROPS
Since the commercial launch of Philips GreenPower LED toplighting in 2016, Philips has continued to work with many growers and researchers to demonstrate the effectiveness of growing under LEDs. Above is an example of side-by-side results – comparison of crops grown under Philips LEDs vs under HPS. (Visit our website posting of this feature for more
images at greenhousecanada.com.) These are real-world results in which all other crop inputs were constant. The only difference was the supplemental light source over the crops.

MYTH 3: LEDS ARE TOO EXPENSIVE
It is understandable that a grower may believe that LEDs are too expensive if the grower relies on a simple side-by-side cost comparison of an HPS fixture to an LED module. However, this is not an equal comparison as there are several missing data points:

LEDs consume significantly less energy: LEDs can result in as much as a 55 per cent reduction in annual operating costs results compared to HPS.

Higher light efficacy: LEDs are more efficient at converting electricity into photosynthetic light – the higher the efficacy of a fixture, the greater the efficiency.

Very long lifetime: LED fixtures can last up to 50,000 hours, whereas HPS fixtures have a significantly shorter life and will require replacement much more frequently.

Installation costs of LEDs are significantly lower than installation costs of HPS: Due to high power draw of HPS, many greenhouses do not have the capacity to accommodate the supply to run HPS fixtures for the length of time needed to achieve their needed light levels without rewiring their greenhouse.

Utility rebates: Incentives based on installation of energy-efficient light fixtures may be available in local areas; these rebates can have a very positive impact on return on investment calculations.

Tailored light spectrum: Light spectrum of LEDs can be tailored based on your growing objectives and specific crops.

When evaluating the option of LEDs, it is important to look at more than just the cost of a fixture. I encourage growers to consider all the many factors and benefits that LED lighting can bring to their operations. As a grower, they will see that LED technology is here, LEDs are ready and LEDs can result in real, tangible benefits.

“This is life in the technology lane. If you always wait for the next price cut or to buy the new improved model, you’ll never buy any technology product because there is always something better and less expensive on the horizon.” – Steve Jobs, 2007