Today’s varieties check off more boxes than ever for today’s consumers. 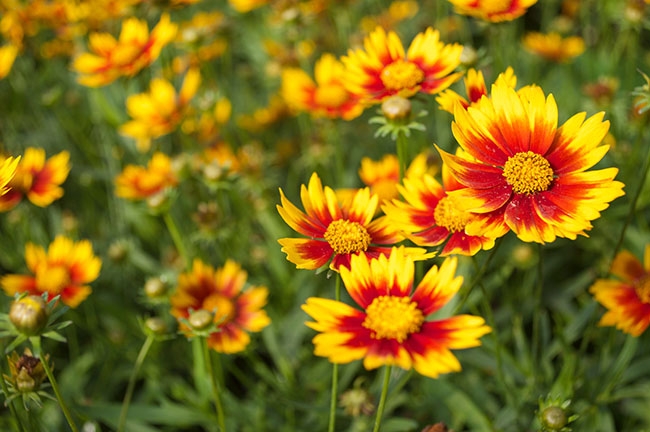 Perennials are a modern gardener’s dream – that’s what more and more garden centre customers are realizing.

“You only have to plant them once of course, and they are low maintenance,” says Dena Gavin, a professor in the school of Environment and Horticulture at Niagara College in Ontario. “You usually only have to touch them once or twice a year. They are economical and attractive, with lots of colour and texture now available. A properly planned perennial bed will bloom all year.”

At outlets of Sheridan Nurseries across southern Ontario, sales of perennials continue to grow, notes president and CEO Karl Stensson.

“They are being planted where once shrubs and evergreens were planted en masse,” he explains. “Grasses especially, as well as long-blooming lilies such as Stella D’oro, are planted everywhere in the landscape here in Toronto.”

The places perennials can be planted are also expanding, notes Stensson. “In our market, backyards are becoming smaller,” he says, “and more people are incorporating many shapes and sizes of containers into their landscape.”

The demand, therefore, for smaller, more compact perennials continues to be strong, but Sheridan Nurseries is also selling perennials in much larger sizes than in the past, accommodating gardeners with more space who don’t want to wait a year or two for their plants to fill out. “Nowadays we hardly sell any four-inch potted perennials,” Stennson says. “The norm is one gallon but it’s not uncommon to see two and five-gallon perennials.”

Brighter colours in foliage or flower is also a current trend, along with longer bloom times, notes Mark Cullen, who heads the gardening division at national retail chain Home Hardware. The explosion in popularity of hydrangeas, he says, well illustrates how much consumers like low maintenance and long-lasting colour, as does the growing demand for different coloured varieties of Black-Eyed Susan (rudbeckia), echinacea, Russian Sage and other plants.

Brian Minter, the co-owner of Minter Gardens in Chilliwack, B.C., agrees that colour vibrancy across the spectrum is what today’s garden centre customers want to buy and bring home.

“They want contrasts in colour and texture in their gardens and especially in containers, so that every plant adds value to the other plants in the grouping,” he notes.

“Carex grasses are becoming more popular – Everillo especially with its nice gold colour. And people want perennials that are going to look good longer (over the season), with repeat flowering, earlier flowering, versatility in terms of where you can plant them (sun/shade).”

This year, Minter Gardens sold an increasing number of giant hibiscus (suitable to zone 4), a large plant that offers ongoing flowering of huge blossoms. While they get going relatively late in the season, Minter says these perennials provide a fresh new “wow.”

NEW WAYS OF MARKETING
In terms of perennial marketing trends, Cullen notes that signage, direct sales help and good merchandising are all very powerful in steering customers towards great performing plants such as rudbeckia ‘Goldstrum’ or shasta daisy ‘Becky.’

Cullen adds that tags on perennials need to follow suit – needing to be larger and more colourful. They should also provide detailed information, such as “when the plant is out of bloom,” he says, because “customers often base their buying decision on the tag.”

Stensson adds that at Sheridan, they have chosen to display perennials by their common name, making it easier for customers to be sure of what they’re buying.

Minter, however, asks “how inspiring is a small green plant with a tag showing it in bloom?” He would like to see Canadian greenhouse operators enable garden centres to radically change perennial marketing following the Denmark model, where perennials arrive having been forced into bloom so that people can see them at their fullest beauty and therefore be more inclined to buy them.

Minter asserts that “perennials should all be in bloom in the spring and they should be larger and ready to make an immediate difference in customers’ gardens. Our thinking is still too traditional in that we are pre-judging what people want. Price is secondary to people these days, and it is how perennials are presented that really matters.”

For his part, Stensson believes that retailers who want to successfully market perennials need to shift their perception of them from being only garden/landscape plants to being “impulse buys” like annuals are.

He says when in bloom, plants such as campanulas, echinaceas, rudbeckias, leucanthemums, phlox and veronica can be just as enticing as potted geraniums or begonias.

Lastly, Stensson believes marketing through “collection” branding is here to stay. “From Big Bang Coreopsis and Dolce Heucheras to Sunsparkler Sedums, collections are becoming the norm, and they are competing for bench space,” he explains. “They provide retailers with a good story to tell their customers, but the challenge is deciding which one to embrace and which ones to leave behind.”

NATIVE PERENNIALS
Breeding native perennials to be prettier is also a strong current trend in Gavin’s view. Consumers have been exposed to a great deal of media coverage about reduced bee and monarch butterfly populations, she notes, and they want to do something about it.

There are so many types of echinacea, lobelia and rudbeckias now, she says, adding that “I attended the annual symposium of the International Perennial Plant Association this summer and butterflyweed was chosen as plant of the year.”

Minter, Cullen and Stensson all agree that concerns over pollinator populations has resulted in a surge of consumer interest in native species.

“Plants such as asclepias, lavandula, monarda and nepeta are increasing in their popularity because of their appeal to these beneficial insects,” Stensson notes. “We have created our own Sheridan Garden Classic groupings of popular perennials such as Low Maintenance, Drought Tolerant, Bird and Butterfly,  and new this year is our Bee-nificial collection.”

He adds that sedums, echevera and sempervivens along with other drought-tolerant plants are becoming more popular as consumers look to reduce their environmental footprint.

In addition, Minter adds that ferns of various textures and colours are a growing sales category, especially for containers, with their soft greens that have a calming, “feel-good” effect on people.

A PERENNIALLY BRIGHT FUTURE
Everyone believes that perennials will stay in strong demand for some time to come, especially plants that are garden-ready, colourful, well-labelled and well-maintained at the retailer.

“The growers who are ready with number one stock when the season opens and the retailers who know how to merchandise and maintain their stock will be the winners,” Cullen says. “Bring on the new varieties, those that bloom longer, are more winter hardy, attract pollinators, and are fragrant. In that order.”

However, while Stensson predicts further expansion of perennials into the different areas of the home landscape, he also warns against providing customers with too much choice. Simply put, too many varieties can overwhelm and intimidate, which can cause some customers to shop elsewhere.

“While purists want to see hundreds of varieties of hostas, you can have 25 varieties and cover the gamut,” he explains. “Even then, the challenge is not to scare the consumer away with 25 choices of one plant.”

He concludes that “we as independent garden centres have made gardening complicated and we need to uncomplicate it.”

Treena Hein is a freelance writer in Ontario and a frequent contributor to Greenhouse Canada.


Related
‘I want it all,’ say today’s gardening enthusiasts
Adapting to the evolving needs of today’s consumers
How to make the supply chain more profitable
In conversation with the graduates