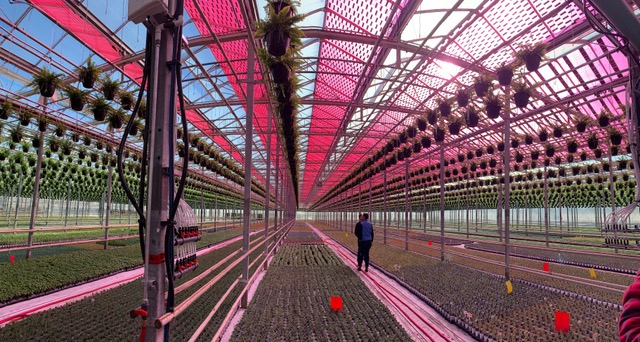 Electricity is a major expense for Canadian greenhouse growers. At the same time, their large facilities offer potential to produce renewable solar energy – but the challenge to date has been how to do that without impacting the growth and productivity of the crop inside.

A potential solution from Ontario solar panel manufacturer Heliene is currently being trialed on half an acre in a commercial greenhouse in Grimsby as part of a project funded through the Greenhouse Renewable Energy Technologies (GRET) research and development initiative.

“This is a distributive energy project that marries crop growth with electricity generation capabilities,” explains Scott McLorie, Vice President of Business Development at Heliene. “This pilot is demonstrating that both crops and solar energy can be harvested from the same land footprint using our technology, offsetting the need to generate power using fossil fuels and lowering carbon emissions from the greenhouse sector.”

The Heliene greenhouse solar panels each contain an energy-producing photovoltaic cell that generates electricity both from the top where the sunlight strikes it and from any reflection coming from underneath, and a red polyurethane back-sheet.

It’s this back-sheet that transforms the green light spectrum into red before shining it on the plants below, while at the same time reflecting it back to the photovoltaic cell, which turns it into electricity that can be used in the greenhouse.

“The key is taking green light, which is less beneficial, and transforming that to red,” McLorie says. “Between that and the diffuse nature of the textured solar glass, we expect no reduction in plant growth.”

Students from Niagara College have been helping with the project, testing comparative growth under and outside of the trial solar panels; electricity generated through the pilot is used in the greenhouse. The trial includes 600 panel modules that were retrofitted into the roof of a 25-year old greenhouse building, with two different cell arrangements – a checkerboard and a stripe pattern – being tested for their impact on crop performance.

To date, the panels have been producing the equivalent of nine percent of the greenhouse’s annual electricity consumption without any negative impacts on production. In fact, the plants have been performing better and as an unexpected side benefit, the red light has been found to be hindering the growth of thrips, a known greenhouse pest.

“We’re very encouraged by the results so far, both the beneficial growth of the crops underneath the panels and the electricity that is being generated,” he says. “We’re using waste light to make environmentally friendly energy, which will lower production costs for growers.”

Installation costs will vary depending on whether a system is being retrofitted into an existing building or installed into a new build, but the company is confident there will be market demand for their first-of-its-kind technology.

“There is always hesitancy to do a big spend on something unknown, but this project can help remove some of those barriers by proving the technology can work on a commercial greenhouse scale,” he adds.