For this year’s Top 4 Under 40 award winners, their achievements are just the beginning.

A passion for plants, a need to succeed and a drive to elevate the horticultural industry – those were all commonalities among the winners of Greenhouse Canada’s Top 4 Under 40 awards this year. These bright young stars are a testament to the continued success of the greenhouse sector. 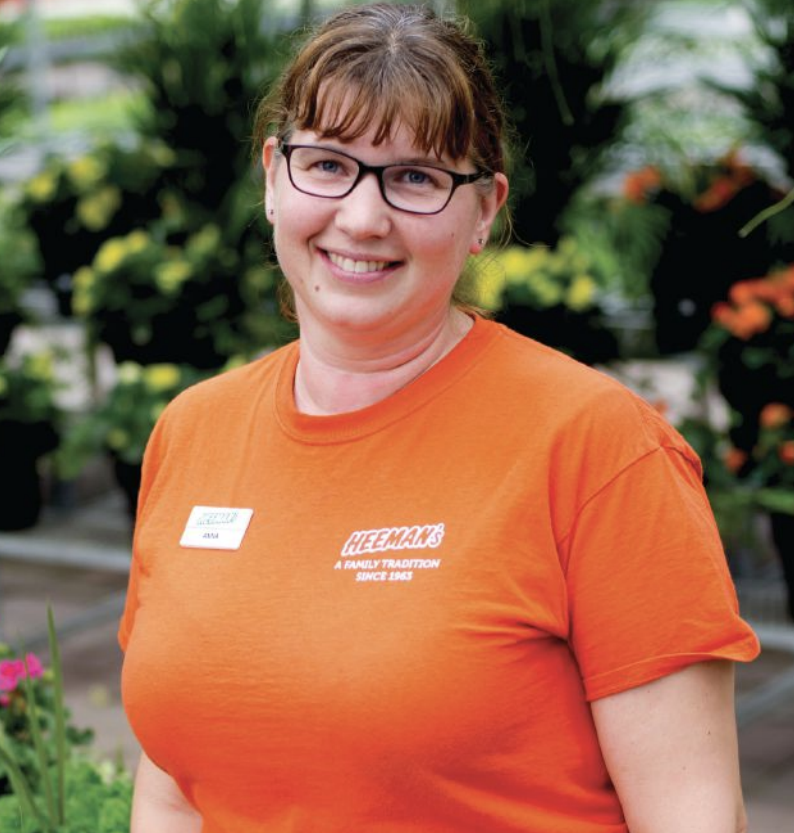 “Although I’ve always enjoyed planting and watching things grow, my interest started in the industry when I got my first summer job,” says Anna Cooper, production manager at Heeman Greenhouses.

During her high school years, Cooper worked at a local greenhouse and strawberry farm after school and on weekends. With a blossoming love for the industry, she pursued a diploma in horticulture at the University of Guelph’s Ridgetown Campus and has been working in the industry ever since – for a total of 23 years.

“Anna Cooper is the real deal!” exclaims Will Heeman, owner of Heeman Greenhouses. He describes Cooper as an extremely capable grower and a hard working individual who combines work ethic and intelligence. “Despite being one of the youngest and newest people on her team, she quickly earned the respect of her peers who now turn to her for advice,” says Heeman.

When Cooper first joined the greenhouse operation, the founder and long-time grower of the business – Heeman’s grandfather – passed only four months later. “This came at a time when our sales were growing by double digits, year over year, and we were working hard to maintain quality while adding more greenhouses, new staff and adjusting our production plans,” says Heeman. Cooper was a bright spot for them during that tough time, continues Heeman, as she stepped up and shouldered more responsibility while they restructured their team.

Since being hired as a seeder less than two years ago, Cooper now serves as the right hand person to the general manager, overseeing a team of over 15 direct reports that include waterers, seed machine operators, transplanting and soil operations staff, among others. She is also responsible for staff training and work scheduling to ensure maximum output while adhering to tight production timelines.

“One major accomplishment is Anna has added fall annual production to our lineup and she ran trials to improve our mum and cabbage production, which have resulted in a complete change to our growing plan for 2019!” says Heeman. For their Christmas season, Cooper also helped streamline production for winter green porch pots, as their sales targets grew from 1,000 to over 3,000 in the past three years.

Known for her strong drive for self-improvement, Cooper looks for ways to work smarter and leads by example. She actively seeks out educational opportunities and scouts for new varieties to add to the operation’s portfolio. She was recently named one of GPN’s Top 40 Under 40.

For Cooper’s part, she credits her co-workers for motivating and challenging her to excel every day. “They believe in me and the knowledge I have to constantly improve the crop, the workplace atmosphere, and ultimately the business.” 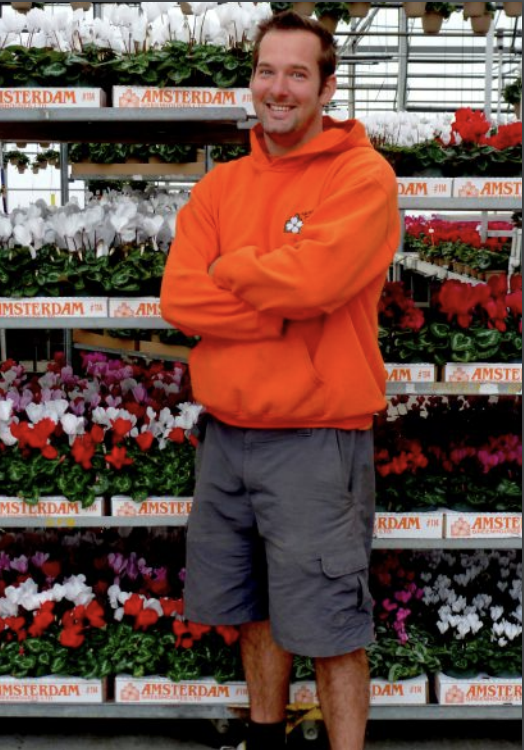 “I was born and raised in this industry,” says Jason Kok, owner and grower at Amsterdam Greenhouses in Pitt Meadows, BC.

As a child, Kok worked alongside his parents in their greenhouse and continued in the family business into adulthood. He went on to take horticultural courses at Kwantlen Polytechnic University and gained experience working with local growers of bulbs, perennials and nursery stock.

“When I came back to the family business, I gained a larger perspective for the business and the direction that we would take it,” he says.

In 2017, Kok and his wife Lindsay bought the greenhouse and garden centre business from his parents.

“Continuing his family business is very important to him, as this is the legacy of his parents,” says Lindsay. “I am very proud of what we have done to the company since we’ve owned it.” The greenhouse operation now proudly uses all organic media and a mycorrhizal fungal product with their organic feed.

Described as compassionate with a sense of humour, Kok’s management style has built a strong work environment based on teamwork and trust, paying compliments when due and addressing problems where needed. He listens to what the staff have to say and makes the changes they request, says Lindsay, “and in doing so, it makes the staff feel at home.”

Kok also organizes regular training and educational workshops, drawing from outside industry expertise to ensure their staff can access the latest skills and tools. “Instead of just a job, many of our staff feel this is their career,” says Lindsay.

Engaged in their local community as well as the horticultural sector, Kok is an active member of the BC Nursery and Landscape Association, as well as United Flower Growers’ Association and Nurseryland Canada.

Celebrating Amsterdam Greenhouses’ 40th anniversary, the results of the couple’s hard work has not gone unnoticed. The business was presented with the Agribusiness of the Year Award by the Maple Ridge-Pitt Meadows Chamber of Commerce earlier this year.

“My motivation comes from my family and the drive to continue to build my business and grow our family legacy,” says Kok. 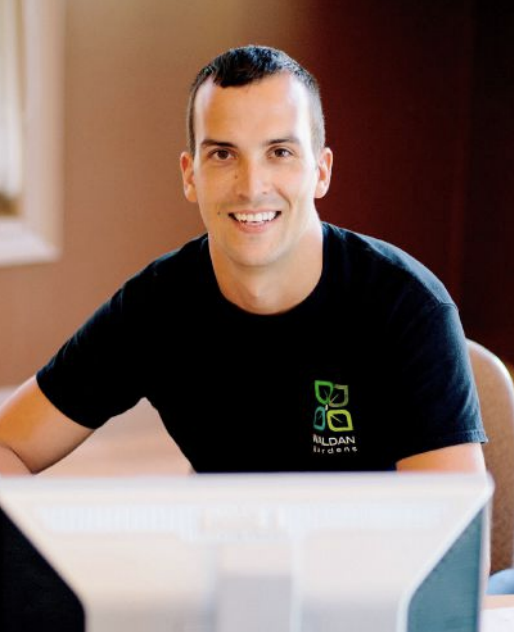 “I grew up on our family’s field vegetable farm,” says Jeff Newhouse of Waldan Gardens in Wainfleet, Ont., “and when I was 13, we decided to build our first range of greenhouses.”

After completing university, Newhouse joined the family business full-time, focusing on finance, administration and capital projects. A lover of new opportunities and challenges, he found himself taking on a number of key projects once again in his role.

Newhouse was at the helm of Waldan Gardens’ recent 120,000-square-foot expansion, says brother Chris, co-owner of the greenhouse operation. “This has been a monumental year for Jeff.” Through careful planning and thoughtful execution, Newhouse was instrumental in the layout and design of the new facility, bringing in new machinery for automating many of the greenhouse’s production processes.

In addition to lessening their labour load, Newhouse worked to reduce energy costs by procuring and installing Waldan’s cogeneration unit in 2017. Described as a “behind-the-grid power plant,” the unit currently handles the lighting load while supporting the heating needs of the facility, says Chris. Outside of the greenhouse, Newhouse is an active member of Ag Energy’s board of directors.

Always seeking to elevate the floriculture sector, Newhouse has hosted a number of events at Waldan’s, including grower meet-and-greets in partnership with Berger, Zwart Systems, and Verhoef Electric, as well as a Petals & Plates consumer dinner event with Flowers Canada – drawing 120 to 150 guests. Whether it’s improving grower rapport or raising awareness around local flower production, Newhouse’s activities clearly reflect his dedication to the sector. 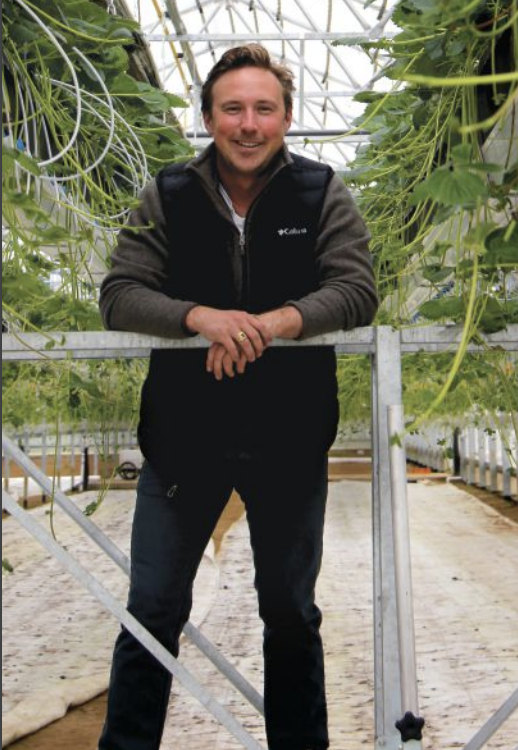 EZ Grow Farms
Langton, ON
“My love of plants and unlocking their potential, paired with a passion for business, has always been in my blood,” says Dusty Zamecnik, co-owner and production manager of EZ Grow Farms.

While the family operation has been propagating strawberries for well over 20 years, he explains, it was through his involvement with various agricultural associations that he came to understand the emerging greenhouse berry industry.

Described as a horticultural innovator, entrepreneur and passionate advocate for Canadian growers, Zamecnik was one of the first to assess the need for properly grown strawberry plant material for the young greenhouse strawberry market, says Shawn Mallen, manager of hydroponics and manufacturing at A.M.A. Horticulture. Travelling back and forth from Europe to research innovative techniques, Zamecnik introduced the first commercial suspension propagation system to North America.

Pairing this European propagation technique with a Cravo retractable-roof greenhouse from a Canadian manufacturer in Brantford, Ont., EZ Grow Farms has become a key source of young strawberry plants in North America. Initially starting with a trial order of 40,000 plants in 2016, they now grow over 1,200,000 plants for greenhouse growers, with more acreage coming online annually, says Mallen.

Crediting their success to the team at EZ Grow, as well as key suppliers and financers, Zamecnik says he is motivated by working with like-minded individuals who “embrace the unknown, pioneer the future and take that leap of faith.”

Known to share his knowledge with with colleagues on strawberry production,  he also uses social media to dispel myths and stereotypes around modern farming practices, including pesticide use, sustainability and automation, says Mallen.

Zamecnik has volunteered with a number of industry organizations, including his roles as a board member of the Berry Growers of Ontario, chair of the Norfolk County Agricultural Advisory Council, member of Canadian Horticulture Council’s Berry Working Group, and the Young Farmer Representative for the Ontario Fruit and Vegetable Growers’ Association, among others. In 2017, Zamecnik received the Ontario Outstanding Young Farmer Award. In his limited spare time, Zamecnik hones his entrepreneurial skills by growing Hometown Brew Co., a joint venture with his cousins that uses local produce, including EZ Grow’s own blueberries and hops.

“Dusty’s passion for the industry and energy for ongoing education and innovation is contagious,” says Mallen, “and we can’t wait to see what he will do next.”